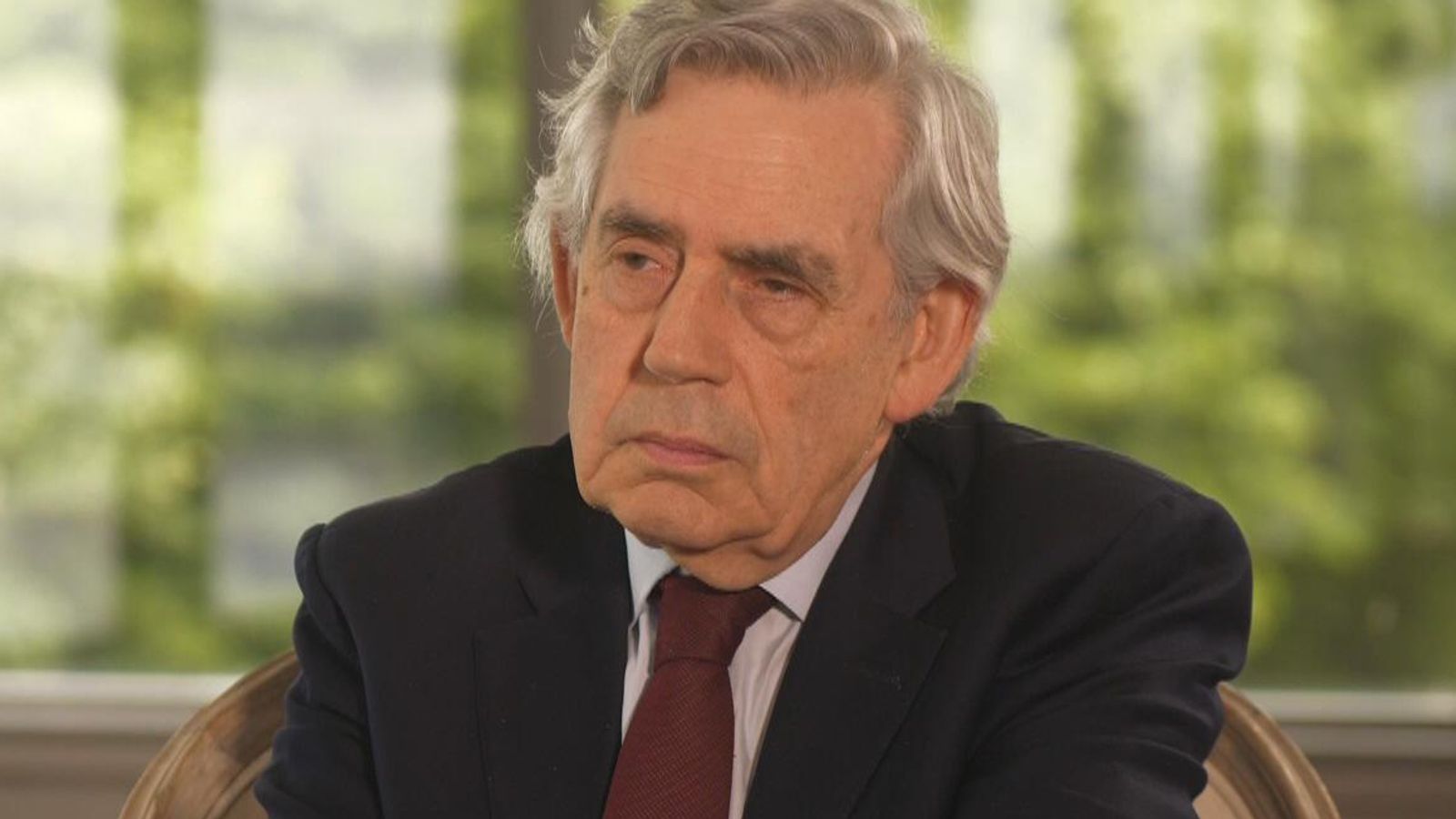 Gordon Brown has claimed that Britain is “at war with America over Ireland” – amid opposition from US politicians over plans to tear up the Northern Ireland Protocol.

The former prime minister told Sky News’s Beth Rigby Interviews that there was no chance of the UK signing a trade deal with the world’s biggest economy unless the problems were resolved.

He directly linked the issue with the cost of living crisis that is threatening to deepen in the months ahead – arguing that without repairing trade relations with leading export markets, the economic squeeze would drag on for years.

In a wide-ranging interview, Mr Brown also claimed Boris Johnson had no plan to tackle the cost of living and called on him to go on television to explain “what needs to be done” ahead of what is expected to be a sharp plunge in living standards over coming months.

The ex-Labour PM said he did not wish to make personal criticisms of Mr Johnson but made a scathing reference to a much-mocked CBI speech last November in which he “talked about Peppa Pig instead of talking about an industrial strategy”.

Mr Brown also reflected on past dealings with Vladimir Putin and the assassination of Alexander Litvinenko on British soil in 2006 – revealing that at the time the UK knew of Mr Putin sending more assassins into the UK to target others.

His most eye-catching language was on the impact of Britain’s policy on the Northern Ireland Protocol on the other side of the Atlantic.

The protocol governs Northern Ireland’s post-Brexit trading arrangements but problems created by its implementation have resulted in political deadlock, with unionists withdrawing from power-sharing until they are resolved.

Legislation aimed at tearing up parts of the deal this week passed its first passed its first Commons hurdle – despite attracting stinging criticism from MPs including another former PM, Theresa May, and setting Britain on a collision course with the EU.

It has also raised hackles among leading US legislators in Washington.

Mr Brown said the UK needed to repair trading relations with Europe and the United States as it seeks economic recovery – but that it was “at war, if you like” with both.

He said: “We’re at war with America over Ireland because America will not sign a trade treaty with Britain as long as we cannot sort out the issues related to Ireland.”

Mr Brown said that would be the case even if US President Joe Biden continues to back a trade deal.

“He may think that but the American congress will not think that,” he said.

“And that’s very much part of our future because if we cannot export to the leading markets in the world, and cannot do so successfully with these new industries and new technologies, then the cost-of-living crisis will be with us for years and not just temporarily.”

Mr Brown, who was at the heart of New Labour under Tony Blair – serving as chancellor for a decade from 1997 before becoming PM – was scathing about Mr Johnson’s approach to the cost of living crisis that has seen inflation surge to a four-decade high.

The former prime minister, who played a leading part in the global response to the financial crisis in 2008 and 2009, said of the current government: “There is no plan. They don’t seem to have a clue what to do.

“There should be a television broadcast by the prime minister explaining what needs to be done.

“You cannot go through a winter when people are being asked to take the biggest cut in their standards of living for 50 years and not ask people to understand what you’re trying to do, and give them a plan for what do we do.”

Read more:
PM may have avoided knock-out punch – but he soon faces another huge potential blow-up
What is the Northern Ireland Protocol and why does it matter?
What can I do if I can’t pay my household bills? An expert answers

Mr Brown, who as chancellor handed the Bank of England independence in setting interest rates in 1997, did not spare the Bank in his assessment of the current situation.

“The purpose of the Bank of England is to help us get back to stable prices, and stable prices may be 2% or 3% or 4%.

“But to get there they’ve got show us a pathway to it – and unless there’s a pathway then people will be excused for thinking inflation could be 11% this year, 12% next year or 13% the year after – and the Bank of England has not done that.”

But his most trenchant criticism was reserved for the government – echoing claims from other politicians that its approach to the Northern Ireland Protocol, the World Trade Organisation and the European Convention on Human Rights diminished its global reputation.

“I think Britain has got to be very careful that we have got respect in the world because we are a country that has valued the rule of law, democracy, freedom, liberty,” Mr Brown said.

“If we appear to be riding roughshod over treaties that we’ve agreed to sign, over laws we’ve asked other countries to sign up to, over rules that historically all British governments have accepted… then it is difficult to persuade other countries to listen to the advice that we’re giving.

“I would caution Boris Johnson against going further, if you like, in ignoring the rule of law.”