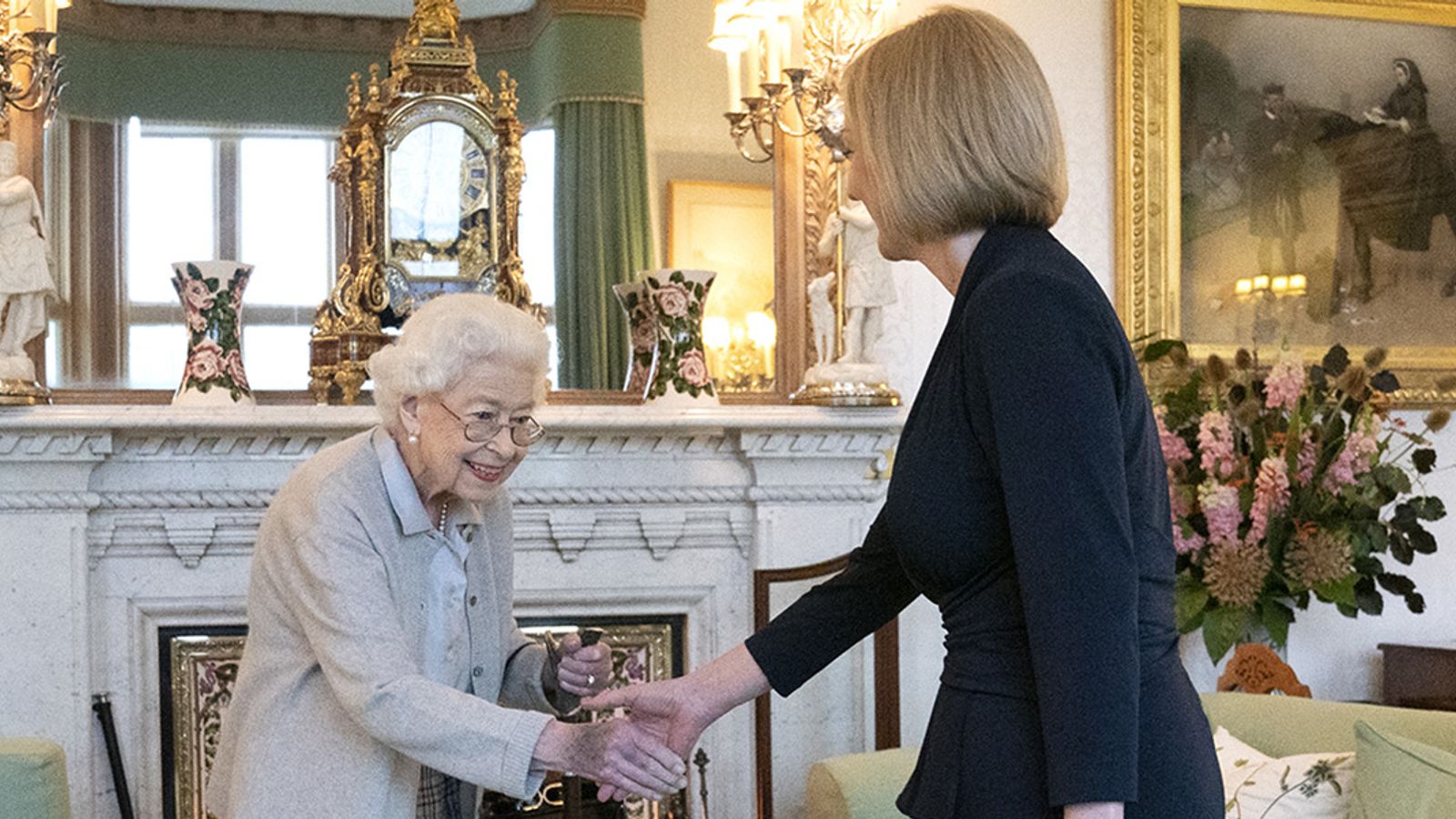 Liz Truss has become the prime minister of the United Kingdom after being officially asked by the Queen to form a new government.

The former foreign secretary beat her rival Rishi Sunak to win the Conservative leadership race on Monday and will replace Boris Johnson in Number 10.

In a break with tradition, Ms Truss travelled to Balmoral, where the Queen is on holiday, for her formal appointment.

It was thought to be best for the Queen, 96, not to travel back to London due to her intermittent mobility issues.

A picture of the pair showed them meeting in the drawing room of Balmoral in front of an ornate fireplace.

The smiling monarch, who was wearing a tartan skirt and holding her walking stick, shook hands with Ms Truss as she became the 15th prime minister of her reign. The first was Sir Winston Churchill.

After the so-called kissing the hand ceremony, Ms Truss was making her return to Downing Street to begin assembling her cabinet.

Several well-known figures have resigned ahead of the expected reshuffle, including Priti Patel, the home secretary, and Nadine Dorries, the culture secretary.

Other MPs will be eagerly waiting by their phones for a job offer, or their marching orders.

Sir Iain Duncan Smith, the former Conservative leader and Truss cheerleader, told the BBC he had turned down a role.

“I am very happy to support her,” he said. “Sometimes in life you have got to figure out whether you add value to a particular job that you are being asked to do.”

Earlier in the day, Mr Johnson gave his last speech as prime minister to a packed Downing Street before travelling to Balmoral to formally tender his resignation to the Queen.

He said he would “get behind Liz Truss every step of the way” and told the Conservative Party that “it is time to get behind” his successor.

Mr Johnson also hinted at a possible political comeback, comparing himself to Cincinnatus, a Roman statesman who resigned and returned to his farm before, according to tradition, becoming leader again in later years.

Ms Truss will make her own speech on the steps of Number 10 to set the agenda for her leadership on her return.

Supporters of the new prime minister tweeted their congratulations, with one of her closest allies, Therese Coffey, the outgoing work and pensions secretary, calling the appointment “brilliant news”.

James Cleverly, the outgoing education secretary, said she had been “a great friend” to him and his wife, adding: “She’s been a great foreign secretary, and she will be a great prime minister.”

Ms Truss also got well-wishes from further afield, with the Irish taoiseach, Micheal Martin, saying he was “committed to a strong and deep relationship between our countries, and to working in an open and constructive way” with the new prime minister.

‘No one is above the law’: Alec Baldwin settlement has ‘no impact’ on criminal probe, prosecutors say
Putin’s difficulties make use of a tactical nuclear weapon ‘more likely’, US expert warns
Biden’s surprise brings Elton John to tears at White House
Company insolvencies at highest level since 2009 as energy bills bite
As 125 die in stadium violence, ex-Indonesia manager says fans’ passion can have devastating results