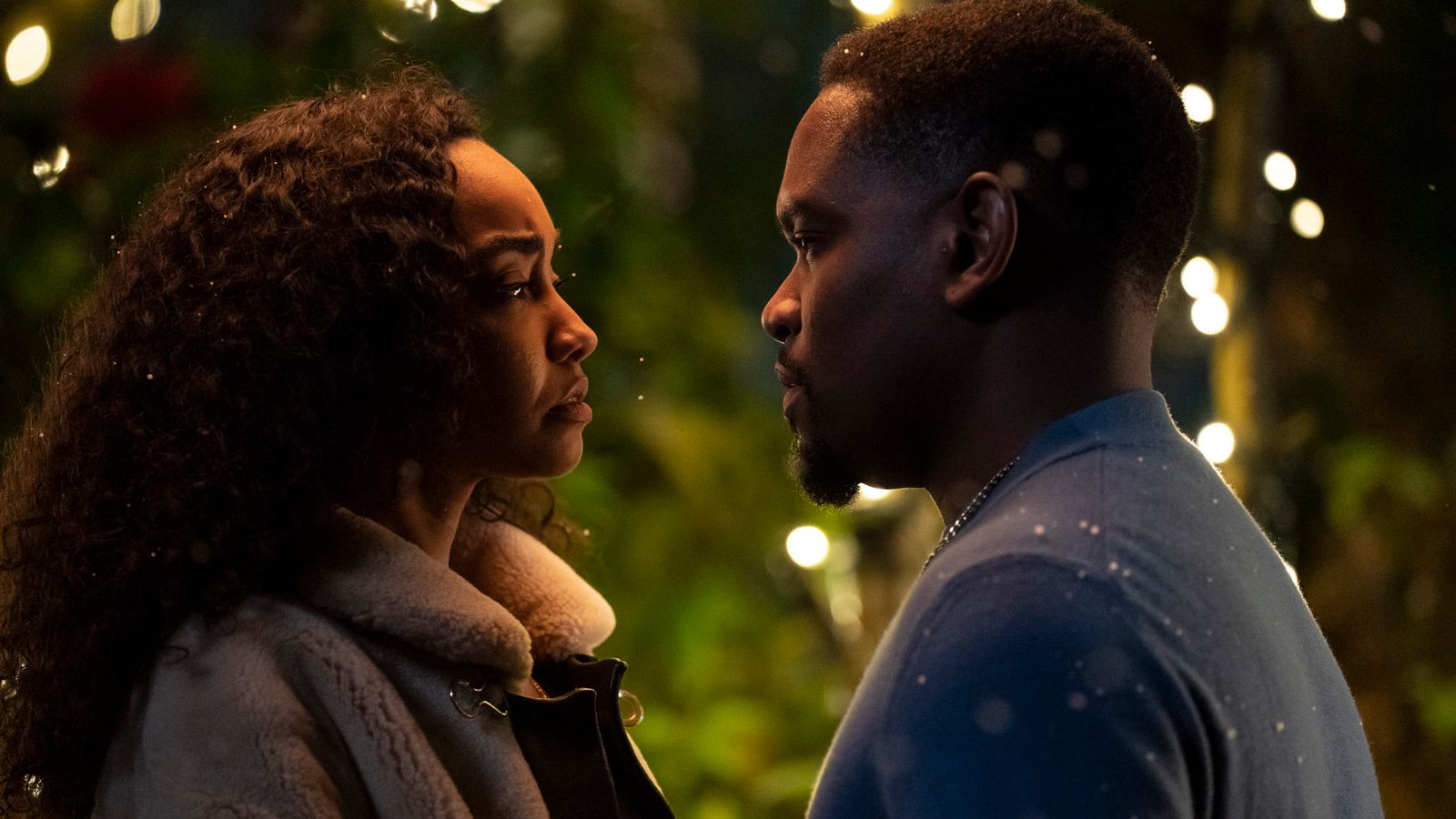 As part of one of Britain’s biggest ever girl bands, Little Mix’s Leigh-Anne Pinnock is no stranger to performing.

But now she’s stepped off the stage, and for now at least away from Little Mix, and in front of the camera for her first-ever film role in Boxing Day – which is being billed as the first black, British rom-com.

The star has told Sky News’ Backstage podcast that despite her experience, it wasn’t an easy transition.

“It’s pretty wild and for me I think it’s probably one of the hardest things I’ve ever done,” Pinnock explained.

“I mean, I can get up on stage and I can sing in front of millions of people, but that first day going onto that set, I was so scared, it’s a whole new world, you know?”

In the film the singer plays a popstar – so perhaps not the biggest stretch for her – but she says she hopes this role is just the start.

“It was super scary, but I loved every second of it, and for me, I feel like I definitely have the acting bug now.

“I want to go on to do a lot more things, so I’m excited to see what else hopefully will be in the pipeline.”

Boxing Day is loosely based on writer-director Aml Ameen’s own life.

The Yardie actor, who also stars in the movie, wrote the film to reflect his own experiences growing up, and move away from the idea that a production with a black cast will be set on the streets.

The result – a festive feel-good drama, in the vein of Love Actually.

He told Sky News’ Backstage Podcast that he’s enjoying his moment, saying: “I am the luckiest guy happening right now, I think today is my day – do you mind if I take it?

“You’re talking about Oscar nominee Marianne Jean-Baptiste, Aja King, Stephen Dillane, you know some really, really stellar cast – and of course, the biggest pop star going Leigh-Anne Pinnock, so I feel incredibly lucky to have had come together.”

It seems bizarre that we’ve not seen a black, British rom-com released before now, but Ameen says he doesn’t think the timing of this movie can be put down to any single thing.

“I think sometimes life has to have this kind of culmination of events that come together to present opportunity and when there are people there ready to take the opportunity, something as lucky as a good film happens,” he said.

“I think the internet has helped in major ways. People are very interested in other people’s cultures, I think me as an artist, I didn’t write it yet and this particular version of it comes from my brain, so I had to go through a series of growing and learning and travelling.

“I think it’s an array of things as to why not? But I prefer to think of like, it’s here and that’s what we’ve got to focus on.

The movie comes at the end of a huge year for Pinnock.

In May she made history as part of the first girl band to ever win the best British group prize at the Brit Awards, and in her personal life she’s become a mother – welcoming twins with her fiance Andre Gray in August.

She says the film – in which she performs solo material for the first time – means a lot to her.

“I feel like this is probably one of the most exciting moments in my personal career, like the moment, and I’m just so excited for everybody to see it,” Pinnock told Sky News.

“Even just for me to be singing on my own like, this is not something I’ve done for a whole 10 years.

“So I mean that’s in itself scary.”

But despite it being her first film role and her first time singing solo, Ameen says Pinnock has proved she was the right person for the job.

“Leigh-Anne moved us incredibly in this jazz cafe scene where she literally transported us to something that felt really deep,” he said.

“And actually, that was the first week of filming doing that, and she completely came into her own with that.

“So I would look forward to people seeing her in this performance man, it’s powerful.”

Boxing Day is out in cinemas now, hear our review on the new episode of Backstage – the film and TV podcast from Sky News.

Truss is a ‘danger’ to the economy and has ‘lost control’, says Starmer
Pound sinks to record low against the dollar as chancellor and prime minister defend mini-budget
Cost of food rockets by more than 10% in just one year
New law in California stops rap lyrics from being used as evidence in court
China’s flood of new electric cars cost 20% more to insure than fuel-powered cars