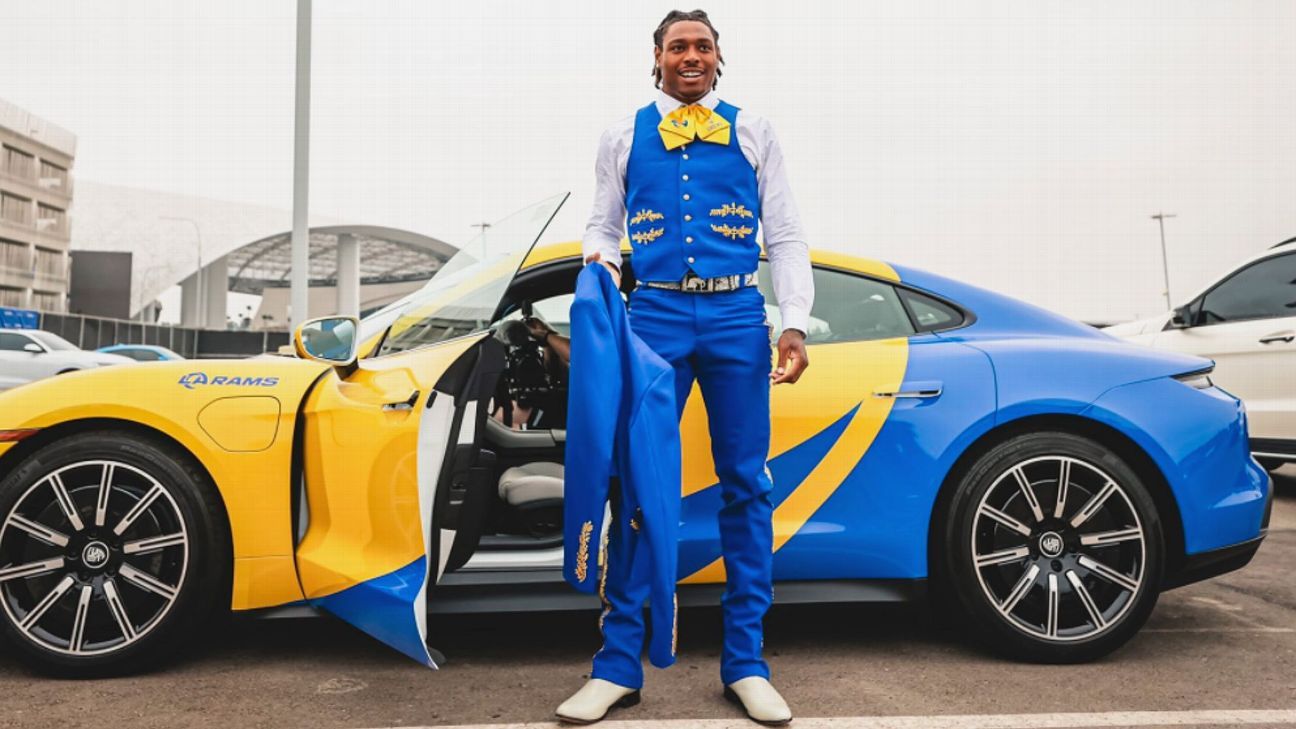 INGLEWOOD, Calif. — A trumpet blared a vibrant beat as a string ensemble joined along.

“I got five on it!” sang the Mariachi Rams as the unexpecting SoFi Stadium crowd roared in anticipation.

Standing near midfield, a grin grew across Jalen Ramsey‘s face as the Los Angeles Rams‘ cornerback glanced to the infinity screen, saw the Mariachi Rams donning his No. 5 jersey and heard their tune, one of his favorite hip-hop songs arranged with a mariachi flavor.

“The energy was amazing and in that moment I just wanted to be like, ‘Yeah, what’s up? Get turnt up!'” Ramsey recalled. “That was something that was super special and personal that they did.”

When the Mariachi Rams’ 60-second rendition of Luniz’s 1995 hit ended, Ramsey nodded his head, waved his hands in appreciation, then got back to the Week 9 game against the Tennessee Titans.

“We wanted him to actually know that we were doing it for him,” said Jesse Hernandez, one of nine band members. “Jalen is the man. He’s our buddy.”

The Mariachi Rams have grown something of a cult following since they started playing at Rams games in 2019.

“It’s electrifying,” said Santiago Alberto, a band member who arranges the group’s music. “Like the adrenaline gets going. It feels like we’re doing a concert for 70,000 fans.”

Rams fans often ask the impeccably suited band members for selfies and provide their full attention when the band performs from a stage in the Northwest corner of the stadium bowl during breaks in the football action.

But perhaps the Mariachi Rams’ most notable fan is the All-Pro Ramsey, a 27-year-old Nashville native whose attention they captured when he played his first game in Los Angeles two seasons ago after his blockbuster trade from the Jacksonville Jaguars, whom the Rams host Sunday (4:05 p.m. ET, Fox).

“It’s just so cool to see all these different cultures all together, unified through sports and music,” said Alberto, a 27-year-old music teacher. “I just feel like we’re lucky that we have the opportunity.”

“Being in L.A. and being in the culture here and being around so many different people in the community, they kind of embody what L.A.’s about,” Ramsey said.

Before a Week 3 matchup against the Tampa Bay Buccaneers, Ramsey pulled up to SoFi Stadium in a blue and yellow Porsche and stepped out in a matching charro, a traditional mariachi suit, with custom white boots, proudly displaying his esteem for the band.

“It was just pure joy,” Ramsey said, describing his homage. “They hand-stitched everything to a T, got my measurements, everything, the suit fits perfectly. … It was super special. Super special moment.”

It was something Ramsey decided he wanted to do after watching the Mariachi Rams infuse life into the stadium with a performance during a preseason game, providing a much-needed change in atmosphere after NFL teams were forced to play mostly in silence in 2020 because of the coronavirus pandemic.

Because of the NFL’s safety protocols surrounding COVID-19, Ramsey has not been able to meet the band in person, but he was able to FaceTime with the group the day he wore their suit.

“They were super excited, and I was super excited to meet them, too,” Ramsey said. “I was happy to be able to represent them walking into SoFi Stadium.”

Said Alberto: “How cool is that to have an NFL player that wants to meet you or something that you’re involved in. Usually it’s the other way around.”

“It’s a cool thing because you would never expect it,” Hernandez said about Ramsey’s fandom.

In a video produced for the Los Angeles Rams’ website, Ramsey mentioned it would be cool if the band learned how to play, “I Got 5 on It.”


Little did Ramsey know, they heard his request and got to work, despite the challenge of taking an original track that included drums, keyboards and synthesizers and making it authentically mariachi, utilizing trumpets, violins, a guitarron, vihuela and guitar with only one formal rehearsal.

“I write the arrangements for the group and I thought, ‘You know what, we’re gonna do this and we’re gonna do it right.’ We’re not gonna make it like, cheesy or anything. We’re gonna do it all the way,” Alberto said. “That was a challenge, but I was up for it.”

“That was dope,” Ramsey said. “I wasn’t expecting that.”

As for Ramsey’s next request?

Gaming’s Oscars night is upon us – here are our picks for the top awards
‘So excited’: Cheryl set for West End debut in spooky thriller
Tory leadership: Final four candidates
Wonderboy still has it, but should he jump right back into the title picture?
Quick Charge Podcast: December 5, 2022