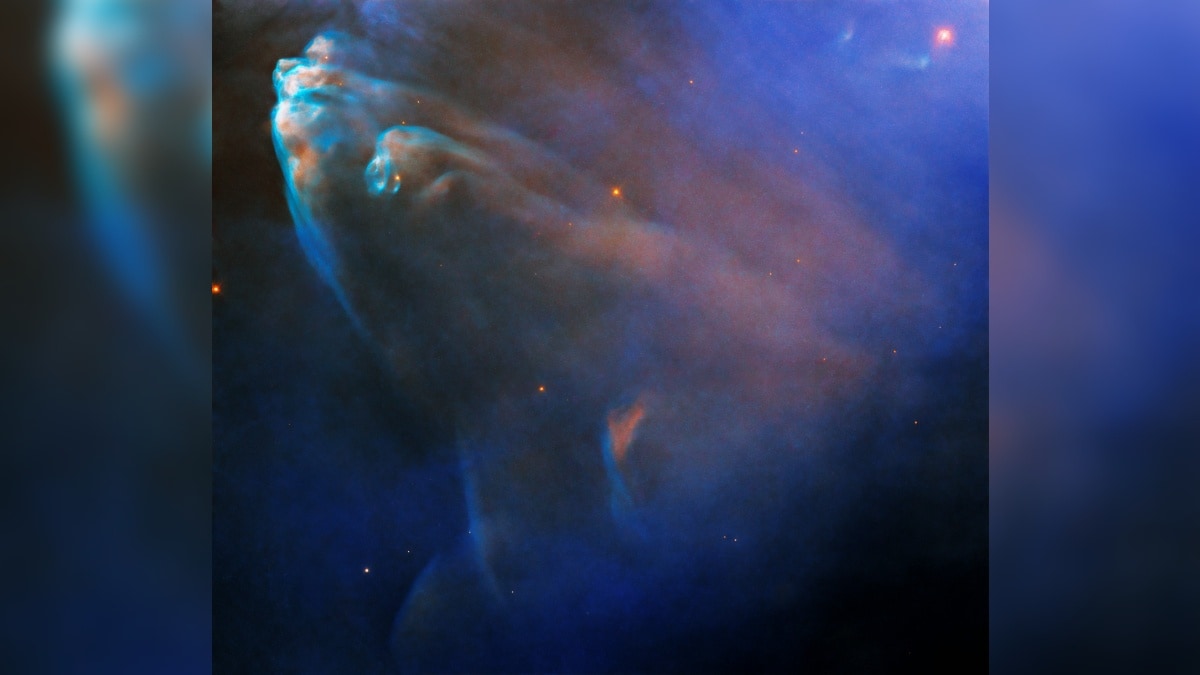 Hubble Space Telescope has often captured stunning images of mysterious events in space. It has allowed astronomers to widen their research and uncover new details. Recently, the telescope was trying to understand how young stars influenced their environment and it witnessed a shock wave of colliding luminous gases in the ‘Running Man’ Nebula. The image of the Herbig-Haro object, known as HH 45, showed clouds of gas and dust glow. Herbig-Haro is a type of nebula that forms when gas from a newborn star collides with dust around it at huge speeds and produces shock waves.

Herbig-Haro objects are rarely seen. This object is located in the nebula NGC 1977, also called the Running Man Nebula, which is a complex structure of three nebulae in the Great Orion Nebula, about  5,000 light-years from the Earth.

The Running Man Nebula is a reflection nebula, meaning it does not emit light on its own but reflects light from nearby stars “like a streetlight illuminating fog,” according to NASA. Hubble was looking at this region for “stellar jets and planet-forming disks around young stars.” It was trying to examine how their environment affects the evolution of such disks.

The Hubble image showed two sets of ionised gases glowing in blue and purple colours. While blue indicated ionised oxygen, purple represented ionised magnesium. “Researchers were particularly interested in these elements because they could be used to identify shocks and ionisation fronts,” the NASA statement read.

This image was not a bad capture for an observatory that was waking up after a technical problem and went into “safe mode” in October. Hubble, a joint project by NASA and ESA, was last serviced in person in 2009 and has not been visited by astronauts since 2011.

NASA is set to launch the more powerful James Webb telescope in December as a “successor” to the Hubble Space Telescope. Citing the differences between the both, NASA has stated that their capabilities weren’t identical. One of the differences NASA pointed out was that while James Webb telescope will study the universe largely in infrared, Hubble had been focusing on optical and ultraviolet wavelengths.