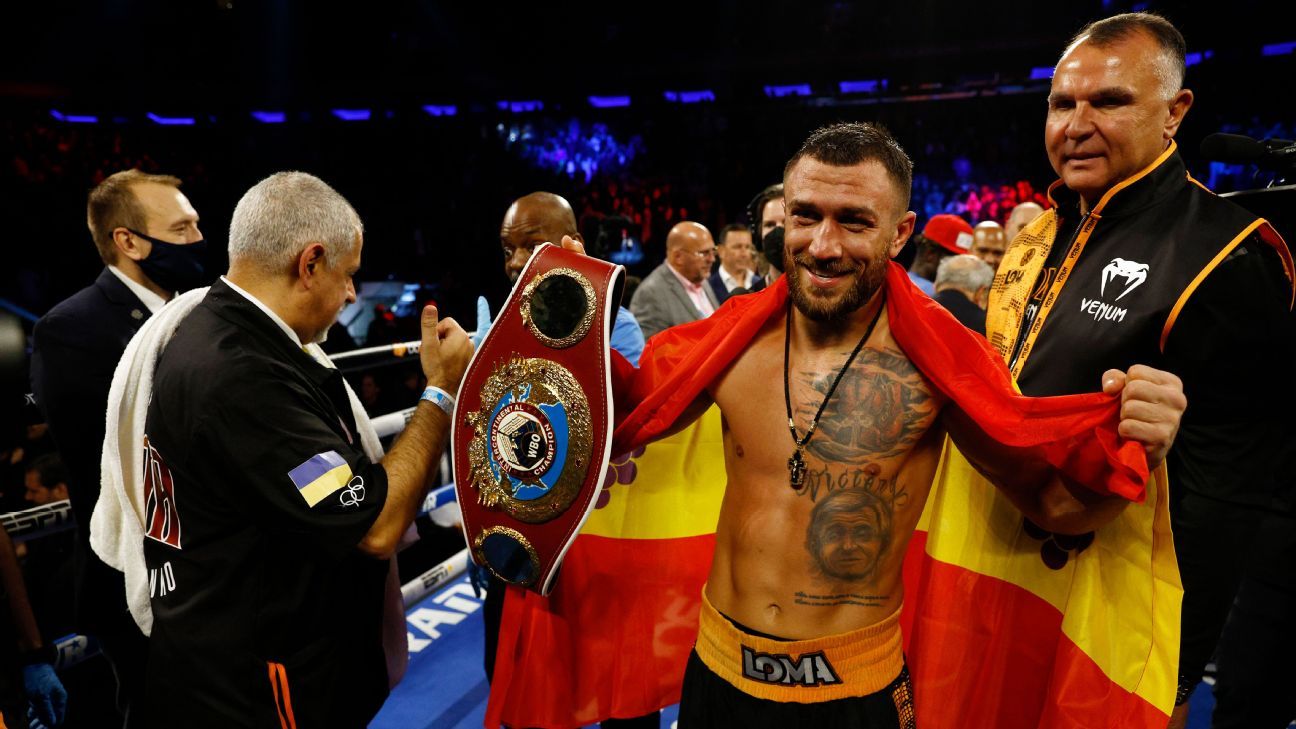 Vasiliy Lomachenko was on the verge of the statement win he was searching for Saturday, the kind of performance that could land him a shot at the undisputed lightweight championship.

After he floored Richard Commey in the seventh round of their lightweight bout at New York’s Madison Square Garden, Lomachenko didn’t go right for the finish. He pleaded with his foe’s corner to stop the contest.

The maneuver ended up costing Lomachenko the definitive TKO win, and instead he settled for a decision victory in which he cruised down the stretch.

Yes, Lomachenko was dominant. He showed vintage form as he utilized angles, feints and deft footwork to slide around Commey and befuddle the former titleholder. But was it the kind of explosive victory that will leave fans screaming for a clash with George Kambosos Jr. for all four lightweight titles?

“I need this chance [for the undisputed title],” said Lomachenko, ESPN’s No. 8 pound-for-pound boxer. “I will go anywhere I need to go to fight [Kambosos]. … I need all four belts.”

Instead, Lomachenko is likely to find himself scrambled together in a heap with Devin Haney, Gervonta “Tank” Davis and maybe even Ryan Garcia for a crack at the new lightweight king. Between Haney, Tank and Lomachenko, all of whom competed within eight days of each other, it’s hard to cement a standout among them.

Lomachenko came through with the most lopsided victory, but he was arguably facing the lightest opposition of the bunch. (Isaac Cruz was untested, yet talented, and pushed Davis to the brink.)

Kambosos, 28, has insisted that whomever he defends his championship against next, the location must be his country of Australia, where he received a hero’s welcome earlier this week.

The long flight home to Sydney came after Kambosos defeated Teofimo Lopez two weeks ago to unify the belts, then endured a whirlwind tour of scouting missions. First, he was ringside for Haney’s decision victory over Joseph “JoJo” Diaz a week later. The following day, he was in Los Angeles for Davis’ tougher-than-expected triumph over Cruz.

All top lightweights will surely be jockeying for the Kambosos opportunity, but the decision rests with the champ. He’s promised all along to choose the lightweight that most impressed him, and now Lomachenko has a convincing case.

Davis and Garcia are the biggest lightweight attractions stateside, but Lomachenko undoubtedly carries more recognition worldwide. The boisterous “Loma” chants that started before the opening bell Saturday was further proof of his star power and commercial appeal that could help Lomachenko and Top Rank entice Kambosos with a larger financial package. Kambosos is a network free agent but promoted by Lou DiBella, who just partnered with Bob Arum for the Commey fight and has a history of working with Top Rank.

Whatever Lomachenko does next, he’s not immediately interested in the matchup with 130-pound champion Shakur Stevenson that Arum has proposed.

“I have a goal, I have a dream: undisputed champion in the lightweight division,” Lomachenko said. “So I stay at 135 and continue on with my career.”

Stevenson had a different take on what Lomachenko’s aspirations should be at 33 years old.

“He had his chance for all of the belts. At this point in his career, I think that you should be looking for big-money fights, make the most money he can get ’cause he’s not gonna be boxing forever.”

Lomachenko said Thursday that the loss to Lopez gave him renewed motivation in boxing. The two-time Olympic gold medalist from Ukraine admitted he believed he could beat Lopez with “one arm,” a reference to the torn rotator cuff with which he entered the ring.

With his shoulder surgically repaired and feeling 100 percent healthy, Lomachenko looked like his old self in a June destruction of Masayoshi Nakatani. Short of the TKO, Lomachenko looked just as good against Commey, a much more accomplished fighter than Nakatani.

Lomachenko entered the Lopez fight as the unquestioned best 135-pounder in the world. His array of speed, pinpoint accuracy and uncanny boxing smarts lifted him to the top of the pound-for-pound list. After the Lopez setback, and now two convincing wins, he once again looks like the most talented lightweight in boxing. But he’s still not the champion. On the heels of another impressive win, he could find himself in the catbird position for a shot at Kambosos and, more importantly, all the belts the Aussie is in possession of.

With four lightweights fights smushed together inside 15 days, we’ll rarely have a better opportunity to survey the landscape. At this moment in time, on the heels of his strong performance against Commey, it’s hard to see anyone upending Lomachenko.

We saw Kambosos slide by Lopez and Haney tested late by Diaz. Davis was the least impressive of the bunch against long-odds underdog Cruz. Of course, it’s never that simple. Kambosos was stepping way up in competition and Haney was also fighting the best opponent of his career. Davis fought with an injured left hand for much of the fight.

Lomachenko, too, emerged far from unscathed. He absorbed plenty of powerful body shots from Commey and a couple of good counter shots to the face, too. But in the end, he outlanded Commey 248 to 73.

No other lightweight who competed during this stretch can boast that kind of dominance. Now it’s up to Top Rank and Lomachenko’s manager, Egis Klimas, to deliver for the fighter. And if it’s not Kambosos, there are still plenty of other intriguing fights for Lomachenko. There’s the Stevenson fight that he doesn’t appear interested right now, but without the Kambosos fight, it might suddenly become very enticing for him.

Clashes with Haney, Garcia and Davis are among the biggest fights that can be made in the sport. A win over either of those three would surely move him one step closer to his ultimate goal of capturing the undisputed championship. And as Stevenson suggested, those matchups would also make him plenty of money, too.

Some of Wall Street’s biggest names are exposed to the Adani Enterprises plunge
Netflix says new password sharing rules were posted by accident
Westminster’s ‘nepo babies’ are here to stay – whether we like it or not | Adam Boulton
Retired general explains why tanks are so significant on the battlefield
Inside the ‘Wormhole,’ Relativity Space’s monster factory 3D-printing reusable rockets