Sir Keir Starmer questioned whether Boris Johnson was too “weak” to lead the country after a significant number of his own backbench Conservative MPs voted against plan to introduce a COVID pass for some events.

Reading out comments from Conservative MPs including former chief whip Mark Harper and Philip Davies, the Labour leader accused the prime minister of having lost the trust of his own party following continuing reports of parties held in Downing Street and across Whitehall last Christmas while London faced tight COVID restrictions.

“We cannot go on with a prime minister who is too weak to lead, so will the prime minister take time this Christmas to look in the mirror and ask himself if he has the trust and authority to lead this country?” Sir Keir asked.

The prime minister defended the proposals to make people show proof of vaccination or a negative lateral flow test when entering some venues from Wednesday, but said he understood the “legitimate anxieties” some Conservative MPs had about the impact of the measure on people’s individual freedoms.

Live updates on COVID after MPs back Plan B proposals

The measure, which passed by 369 votes to 126, is “balanced and proportionate and right”, he added.

His spokesperson later reiterated to reporters that the PM “understands the concerns” of MPs following the largest rebellion of his premiership.

In the last PMQs before the Christmas recess, Sir Keir accused Mr Johnson of being “the worst possible prime minister at the worst possible time” and questioned why many of his Conservative MPs did not back him in the lobby to vote for the COVID pass measure on Tuesday night.

“The prime minister is so weak that without Labour votes last night, vital public health measures wouldn’t have got through,” the Labour leader said, accusing Mr Johnson of “undermining public confidence”.

“His MPs don’t believe him and nor do the British public.”

A majority of MPs supported the mandatory use of the NHS COVID pass for entry into nightclubs and large events.

Mr Johnson said the claim was “not true”, adding that his government is “getting on with delivering on [the public’s] priorities, not just on the economy but above all on delivering the fastest booster rollout in Europe”.

“We’ve done almost double the percentage of any other European country, we’ve boosted 86% of the over-80s in this country, 91% of the those aged 75 to 79, that is an astonishing achievement, and I think that is what the people of this country are focused on rather than the partisan trivia that he continually raises,” the PM responded.

Pressing the prime minister on his moral authority once more, Sir Keir said: “The message from the government has to be: ‘We know that following the rules won’t be easy this Christmas but it is necessary.’

“Can the prime minister not see that he has no hope of regaining the moral authority to deliver that difficult message if he cannot be straight with the British public about the rule-breaking in Downing Street last Christmas?”

SNP Westminster leader Ian Blackford later told the PM: “A prime minister who can’t do what is needed to protect the public, is no prime minister at all.” 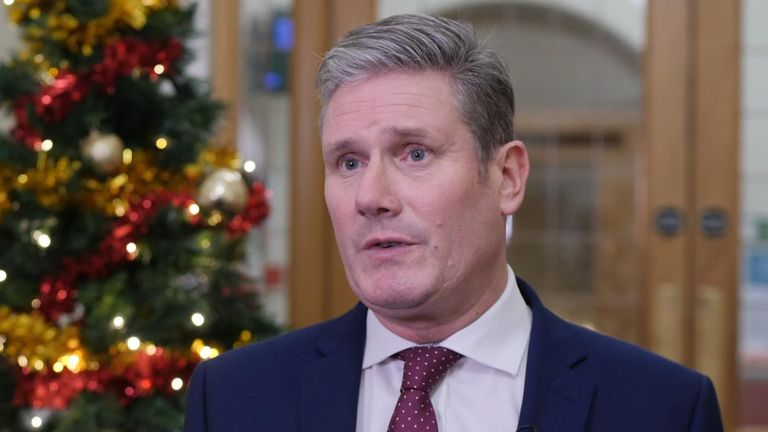 Labour leader Sir Keir Starmer said the Tory rebellion is a ‘significant blow’ to Boris Johnson’s authority, which shows that he’s ‘too weak to discharge basic functions of government’.

Mr Johnson reiterated to Sir Keir that Cabinet Secretary Simon Case was carrying out an investigation into events that took place during the festive period last year across Downing Street and Whitehall, stressing once again that the public wanted the government to “focus on the matter in hand” with the booster programme rollout.

The PM also said that “if further measures are needed” to combat the new Omicron variant “of course this House will have a say”.

It came after the Labour leader said his MPs would continue to vote for COVID regulations if needed and asked Mr Johnson to say if Conservative MPs would do the same.

Referring to the Tory rebels from the night before, Sir Keir said they “voted against steps necessary to protect the NHS”.

Mr Johnson replied by accusing Labour of having “wibble-wobbled over Plan B”.

MPs are due to break for the Christmas recess on Thursday. They are due to return on 5 January.

More than 13,000 Nigerian residents take Shell to court over oil spills
Retired general explains why tanks are so significant on the battlefield
Woman declared dead at New York care centre found breathing at funeral home
‘It’s painful’: US facing record-breaking wind chill factors so cold they’re literally off the charts
‘Greenwashing’ is a good thing, according to one renewable energy tycoon