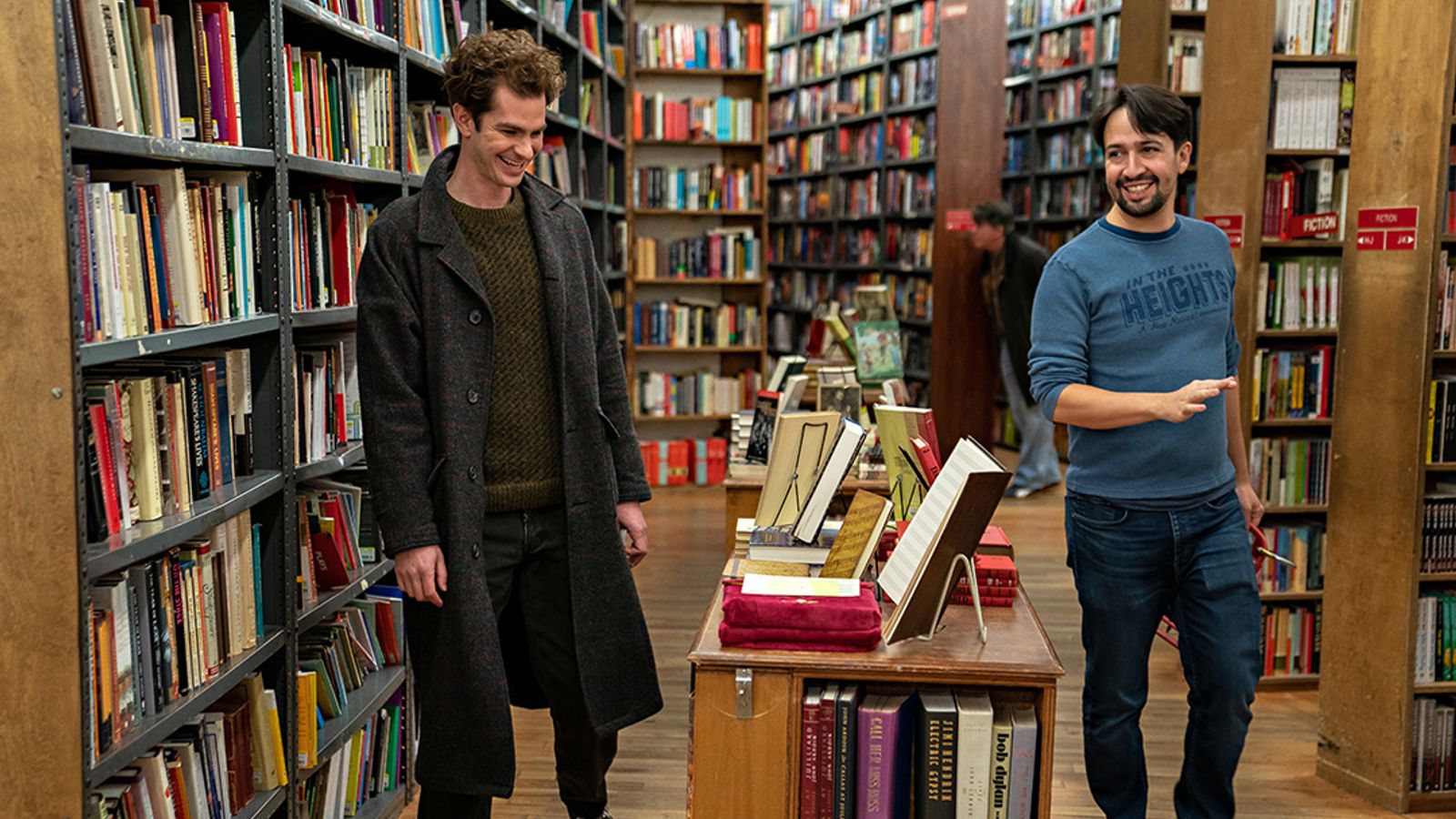 That’s just a handful of work that has helped Lin-Manuel Miranda become a household name over the last few years, and propelled him into stardom.

And it is his latest project that has again brought him into living rooms around the world, letting him leave his mark on a piece of work with a cult following.

His latest film (and directorial debut), an adaptation of the iconic semi-autobiographical musical tick, tick… BOOM! by the late Jonathan Larson, has been lauded, landing nominations for Golden Globes and Critics Choice Awards – wrapping off a golden two years for the creative.

The story follows Larson, who is famed for writing the influential musical Rent, trying to bring his latest work to stage, amid the backdrop of rejection, financial obstacles and heartbreak.

Larson died in 1996, the morning that Rent was due to open on Broadway – meaning he never got to see his work on its biggest stage.

Miranda, speaking on Zoom from the US, explained to Sky News how he managed to bring authenticity to this much-loved piece of work.

“What I knew, having performed in tick, tick… BOOM! in 2014, was that there are a lot of people who loved and knew Jonathan and were still around, and we really leaned on that as a resource.

“All of these particular things, we tried to put as much of that on screen as possible and what I’m proudest of with the film is that the folks who knew and loved Jonathan, from his sister Julie, who is a producer with us and was with us every day on set to… his college roommates and an actress who worked with him who said ‘I felt like I got him back for the two hours that your film played’.

“That’s what I’m proudest of.”

Chatting with him, it became clear he remains incredibly humble, despite all his successes over the last few years.

When asked him why he thinks his work has become so widely praised, Miranda responded: “I don’t know”.

“I know that I did try to make, in every piece I write, I try to bring as much as personal to me to the work as as possible.

“I don’t know any other way of writing than to put myself in the character’s shoes and figure out what it is they want to say. It’s that simple – and it’s that complicated,

“You need a great deal of research and empathy. Those are the two big tools – you have few tools to bring to the fight.

“That’s it. It’s research and empathy, and that’s what I try to bring to everything, whether it’s Jonathan Larson or Alexander Hamilton or, you know, the cheerleading squad in Bring It On.

“That’s all you can do and hopefully you find enough truth in there that it resonates with someone else.”

Miranda also credits his “real life” as helping him write his work, saying that Hamilton (the genre-defying, record-breaking, award-winning musical about the US founding fathers) came to him while on holiday.

“I don’t think it’s an accident that a lot of the characters in my work hear a ticking of a clock that is very loud.

“I am aware of that ticking too, but with a great deal of therapy I’ve learnt to turn it down.

“I’ve made a lot, and I know that the best idea I ever had in my life happened when I was on vacation, when I picked up Ron Chernow’s [Alexander Hamilton] biography in a hammock in Mexico – so I also understand the importance of having a real life.”

While Miranda plays down his influence – his colleagues talk it up

Alexandra Shipp from tick, tick… BOOM! told Sky News, without prompting, that she relished the chance to work with Miranda on the project.

“When they said it was Lin-Manuel Miranda directing it, I was like, ‘what do I got to do? Do I got to cut my face off, do I got to send them a finger? Do I then go and give them an ear, whatever they want? What is that going to be? I’ll do it.'”

X-Men actress Shipp, who gives a stunning turn as Larson’s long-suffering partner Susan in the film, adds: “Working with Lin is so wonderful because he’s not only insanely brilliant, like this man is brilliant, but he also is so much fun and so kind… he’s humble and sweet.

“And he cares, and I think that that’s what’s so beautiful about working with him is he cares about what I’m trying to bring to the table and how we can collaborate on that.”

Brooklyn Nine-Nine’s Rosa Diaz, Stephanie Beatriz, who worked with Miranda on In The Heights and Encanto this year, also talks him up, telling Sky News from the set of West End play 2:22 A Ghost Story: “I love him. He’s amazing.

“I’ve known him since we were both like young, poor artists in New York. He’s an incredible person, friend, collaborator, artist, I love his work, and I think he’s an amazing person.”

Earlier in the year, long-time collaborator Anthony Ramos (Hamilton, In The Heights, 21 Chump Street) added his voice to the Lin love-in, saying to Sky News: “Lin’s a genius. I’m always nervous any time I’m around him, I’m soaking up something.

“I’m learning something from him, and he’s just one of the most brilliant people to ever walk the earth.”

Lloyd Webber, Sondheim, Menken, Schwartz – it feels like Miranda will be the next name added to the list of revered musical theatre writers whose work lives on for decades.

tick, tick… BOOM! is available now on Netflix, Hamilton and Encanto are streaming on Disney+ and In The Heights is on Sky Cinema and NOW.

Bring It On The Musical is running in London’s Southbank Centre until 22 January, with the West End production of Hamilton now on at the Victoria Palace theatre.

2003: In The Heights debuts on stage (writer, performer)

2012: Broadway run of Bring It On The Musical (composer and lyrics)

2021: Film version of In The Heights (composer. writer, performer)