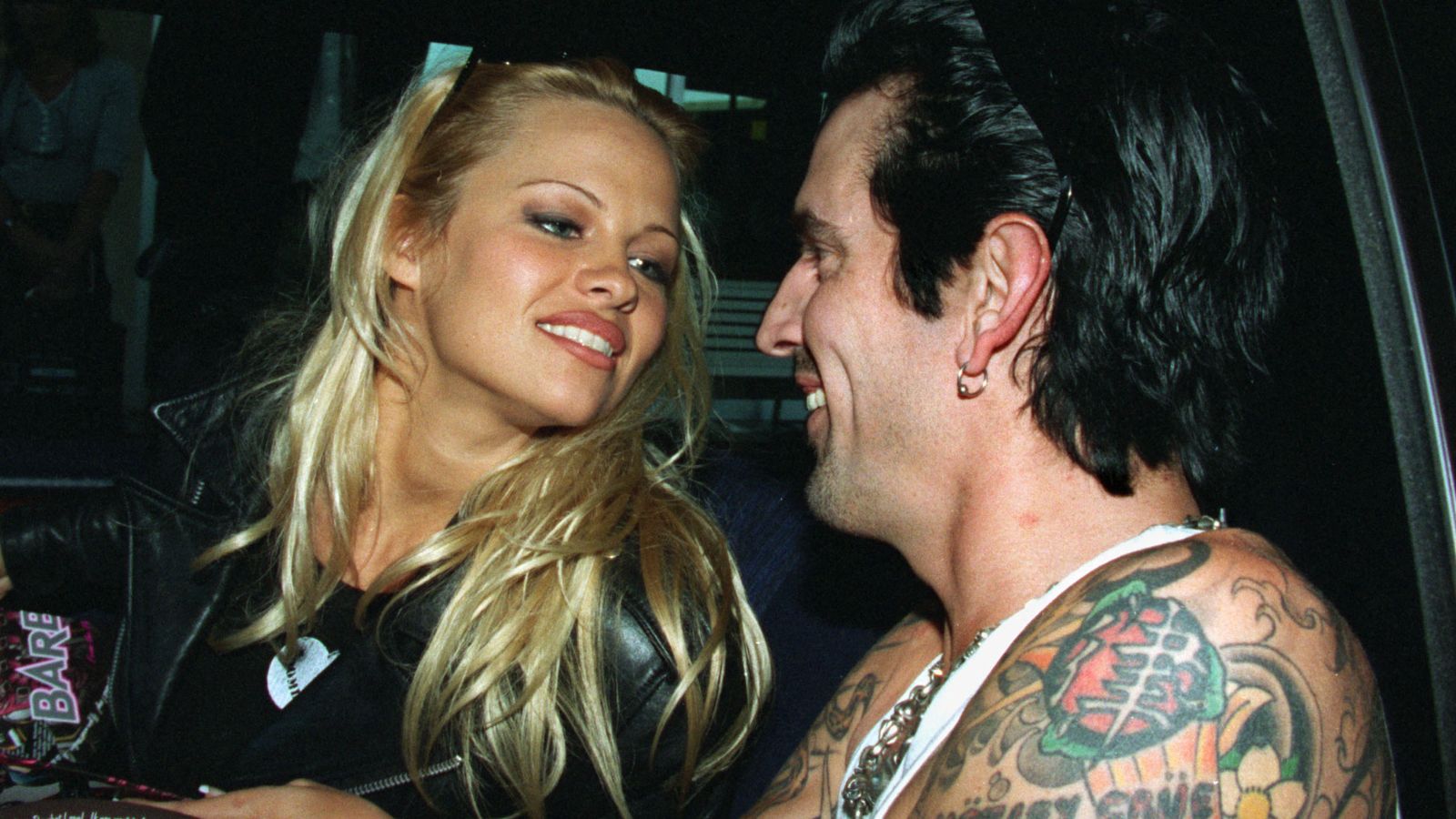 Rather than a wedding band, Pamela Anderson had Tommy Lee’s name tattooed on her ring finger, the inking marking a commitment made just 96 hours into their wild romance.

It was February 1995 when the nuptials took place, the ultimate Baywatch babe swapping her famous red swimsuit for a white string bikini to marry the Motley Crue rocker on a beach in Cancun, Mexico.

Anderson and Lee very quickly became a 1990s tabloid dream; the Playboy pin-up and the tattooed bad boy, a couple who couldn’t keep their hands off each other – and weren’t afraid to let people (journalists and photographers included) know about it.

Read more: Baywatch: Revisiting the ’90s dream – and difficulties – with the stars

By the end of the year, Anderson was pregnant with their first child and details of the sex tape that would soon become infamous had emerged. The theft of the private tape, filmed during the couple’s honeymoon and stolen from their home in Malibu, California, by a disgruntled contractor, left the Baywatch star “devastated”.

Despite the couple’s efforts to curtail it once they found it was gone, the tape snowballed. Coinciding with the early days of the internet, the footage went from underground bootleg-VHS curiosity to full-blown global headline-maker, the first celebrity sex tape to go viral.

When sex tapes featuring Paris Hilton and Kim Kardashian came out in later years, the narrative was the same: the women were laughed at, vilified; the men were deemed sex gods. Given the fame it brought them, questions were raised about whether the footage had been leaked by the subjects themselves. And the videos became known as the Pamela Anderson sex tape, the Paris Hilton sex tape, the Kim Kardashian sex tape; in Hilton and Kardashian’s cases, do you even remember the names of the men involved? (Bizarrely, Rick Salomon, who made the tape with Hilton, later went on to marry Anderson).

Years later, the subject of her own tape inevitably comes up whenever Anderson is interviewed. She has never watched it, never made any money off it herself – despite others reportedly making millions – she tells interviewers, sometimes laughing off their jokes about it. She was an actress and model who had posed naked and spoken openly about her sex life; for years, she was fair game.

Post #MeToo, the world views stories such as this very differently now. And yet, Anderson and Lee’s story is being dramatised in the new series Pam & Tommy, starring Lily James and Sebastian Stan and billed as “a love story, crime caper and cautionary tale rolled into one”.

Paris Hilton opens up about alleged abuse, the trauma of infamous sex tape, and striving for $1billion

Anderson has had no involvement in the series. Which begs the question: why is the story being retold for entertainment, almost 30 years later?

James, who is usually associated with “English rose” roles in shows and films such as Downton Abbey and Rebecca, has been transformed beyond recognition to become the all-American (well, Canadian) bombshell. In interviews, she has spoken of the “misogyny” Anderson was faced with and how women have always been held to much higher standards than men.

But after making tabloid headlines herself in 2020, when she was linked to her married The Pursuit Of Love co-star Dominic West, she must know all too well what it is like having your personal life gossiped about by the world.

Director Craig Gillespie, known for films including I, Tonya and Cruella, says the aim was to change the narrative, to shine a spotlight on how Anderson and Lee (to a much lesser extent), were treated at the time and present the story in “a much kinder” way.

“[People] don’t realise what victims they were,” he tells Sky News. “This was a deeply personal tape. It wasn’t [just] a sex tape, it was an hour-and-a half-long, like all of their relationship and some beautiful moments and happened to have [a few] minutes of explicit stuff on there that was in a safe, in a garage, at their home. And then this happens and with no accountability from anyone.”

On Anderson not being involved, he says: “I just have to respect however she wants to feel about it… In my heart, I felt like we were doing a really empathetic portrayal of what was happening and the victimisation that had happened with them and just how heinous it was, so I thought it was something that was a real opportunity to change the narrative and the perspective of what happened back then… Looking at it through today’s lens was a really unique opportunity.”

Gillespie also says Anderson and Lee’s story “colliding” with the rise of the internet makes for a “powerful commentary” on society and how the way we consume news and information has changed.

“[It was] like the beginning of this obsession with the internet and how we’re so complicit. It’s like there’s no accountability for how we consume this, you know, almost like the internet is our get out of jail free card. So it was fascinating. And the way that we get to come into this story with preconceived notions…

“We have those judgements as we come into the show, we think we know what we thought we knew from what we saw back then, and we see how sort of incredibly wrong we were, and so quick to judge and to consume these soundbites and formulate an opinion that destroyed people’s lives.”

The series does address the misogyny. “I’m on that tape, same as you,” Stan’s Lee tells James’s Anderson in one scene. “No, not like me you’re not,” she replies.

But is it enough to warrant bringing it all back? Like the tape itself, no doubt millions will be watching.

Lee’s representatives declined to comment when contacted by Sky News. Anderson’s representatives did not respond to requests for comment, although according to sources quoted in US reports she has said she won’t be watching and finds the idea of the series “painful”.

It will be interesting to see if the “kinder” approach changes her mind – but once again, the story is out there without her consent.

Pam & Tommy launches on 2 February on Disney+ under the Star banner, for more mature content