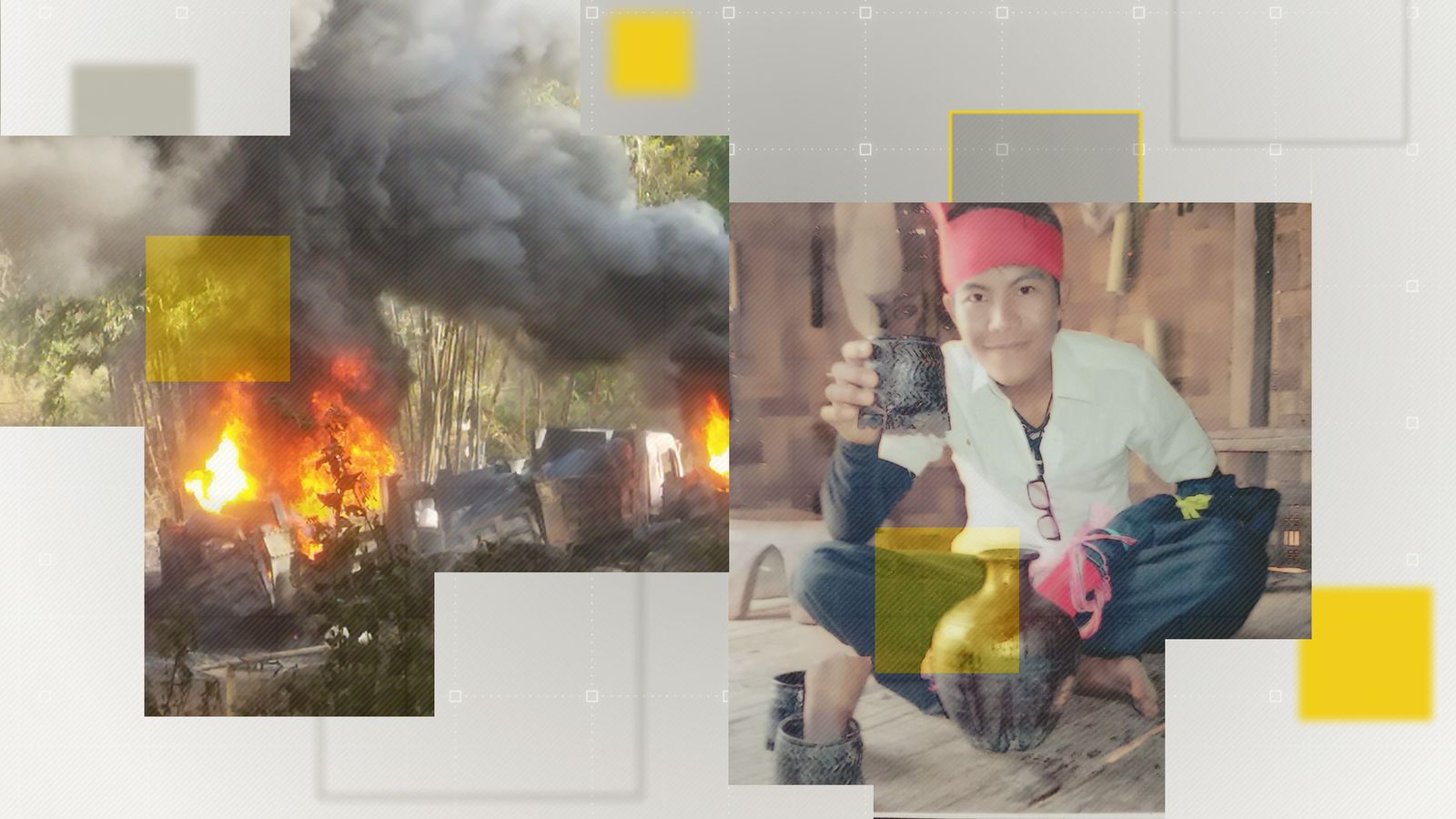 “All the hallmarks of a war crime.”

That’s how the UN’s human rights monitor for Myanmar has described a mass killing that Sky News has been investigating.

The massacre happened near Mo So in Kayah state on Christmas Eve, leaving at least 37 people dead.

It’s an area which has seen heavy fighting between local militia and the military.

The military regime claims those who died were suspected terrorists.

Two Save the Children charity workers appear to be among the dead.

According to doctors, other victims include at least one child aged between 10 and 15 years old, and a disabled man.

Many of the bodies were so badly burned in the attack that it has been hard to confirm all of the violence inflicted.

“This is the kind of brutality that we have seen in various parts of Myanmar. The Myanmar military are known for this.

“They are ruthless….we need to fully investigate it. But these have all the hallmarks of a war crime.”

Since the coup in February 2021, Myanmar has been torn apart by violence.

On one side: the military, or junta, who claimed electoral fraud and overthrew the government to take power.

On the other side: protesters, armed groups and militias who say they’re fighting for democracy.

In an attempt to discover more about how the violence unfolded, Sky News teams in Myanmar, Thailand and London have analysed images and tracked down family members and witnesses.

We also worked with Myanmar Witness, an NGO which is documenting human rights in Myanmar.

WARNING: This article contains a number of images of violence and dead bodies

Police confirmed among those who died was a 28-year-old man named Li Reh.

Described as a hardworking family guy, his siblings explained that Li Reh was easy to identify as his left hand wasn’t fully developed when he was born.

On 24 December, they told us that he left home on a motorbike around 8am.

He was going with a friend to buy a car.

By 10am, the junta confirmed that soldiers were stopping people on a road near Mo So.

It’s the road Li Reh was thought to have travelled on.

Around the same time, four members of the local junta-allied Border Guard Force (BGF) were sent to the checkpoint to investigate, it is claimed.

What happened in the next few hours at that checkpoint in Mo So is difficult to piece together.

No victims survived the attack.

Local militia told me after getting word junta forces were in the area, they arrived at the site of the killings at around 11.15am and saw vehicles burning.

Shadows in militia drone footage analysed by experts at Myanmar Witness suggest it was filmed shortly afterwards, at around 11.30am.

In the footage, the Save the Children car is burning while other trucks are just smoking, suggesting the fires had started fairly recently.

That day, rebel fighters at the site say they discovered the bodies of the four border guards.

Footage shows their hands had been tied with rope and they had been shot.

It was not until Christmas Day, when the fires were out, that rebel units say they returned and discovered 31 badly burned bodies.

Three bags of body parts were also later collected from the scene, according to police.

Our teams tracked down a doctor who helped with the post mortems.

In hiding, he described some of the injuries inflicted on the victims.

We have changed his name for protection.

Dr A explained: “The skulls were completely smashed. Maybe shot with a gun or beaten with something. And, in the chest and back, there are some injuries from being stabbed with a sharp object.

“There were bullet holes on the bodies and most of the bodies were tied up.

“I have never seen anything like this in my entire life. [People] tied up and killed.”

No-one had been able to get hold of him, and his motorbike was photographed among the wreckage.

When relatives called his phone, they said a strange voice answered – a voice they believed belonged to a junta soldier.

Following the deaths, Myanmar’s military regime issued statements saying that on Christmas Eve soldiers near Mo So tried to stop seven vehicles thought to be linked to an alleged terror plot.

It’s claimed the people inside attacked with bombs and guns so security forces shot back.

A battle followed and the vehicles caught fire.

The military said it tried to save people.

Dr A said many of the victims’ hands were tied and some bodies were found outside the vehicles, contradicting the idea that they died driving away.

The regime claimed the people killed were suspected terrorists – so how can the deaths of two charity workers and at least one child be explained?

Thirteen days after the massacre, on 6 January 2022, rebel fighters say they discovered two bodies dressed in local militia uniforms near to the burned vehicles.

The uniforms matched photos released previously by military-run media of two “enemies'” allegedly involved in the Mo So attack.

We’ve decided to include those images of dead bodies at this point in this article, as they make up part of the evidence that helps provide a picture as to what happened that day.

And there are specific details in the images, as we will explain, that are also important elements.

Sky News was provided with photos taken during the post-mortems which showed that under the uniforms the men were dressed in civilian clothes.

Both had been shot.

But officers told us there were no bullet holes or even blood on the men’s uniforms.

In the state media images of “the enemies'”, the positioning of the gun looks unnatural, potentially posed for the photo.

When our team adjusted the contrast on the photo of one of the “enemies”, we discovered the blurring faded.

It revealed one of the alleged soldiers was missing his left hand.

It appeared to be Li Reh, who disappeared on 24 December.

We showed the photo to his brother and sister who were both adamant he wasn’t a rebel.

“He’s not affiliated with any organisation at all,” his sister said.

His brother said he wasn’t able to hold a gun. Instead, his family claims the junta soldiers framed Li Reh and dressed him up to make him look like a rebel fighter.

“They [the junta] used Li Reh’s body to stage that he was from KNPP [rebel force]. They just wanted to clean up the evidence. That’s why they put the uniform on Li Reh,” his brother said.

We put this evidence to the military government but so far it hasn’t replied.

Tom Andrews told Sky News: “The very fact that it appears as if they attempted to make these innocent people, these humanitarian workers appear as if they were combatants.

“There’s clearly something in the mind of these commanders that this is a war crime. This is evidence of a war crime.”

The full scale of what happened in Mo So is still unfolding.

So far police say 40 people have been reported missing.

Those responsible for Myanmar’s Christmas Eve killings may never be brought to justice.

With thanks to Myanmar Witness, an NGO which is documenting human rights incidents in Myanmar.