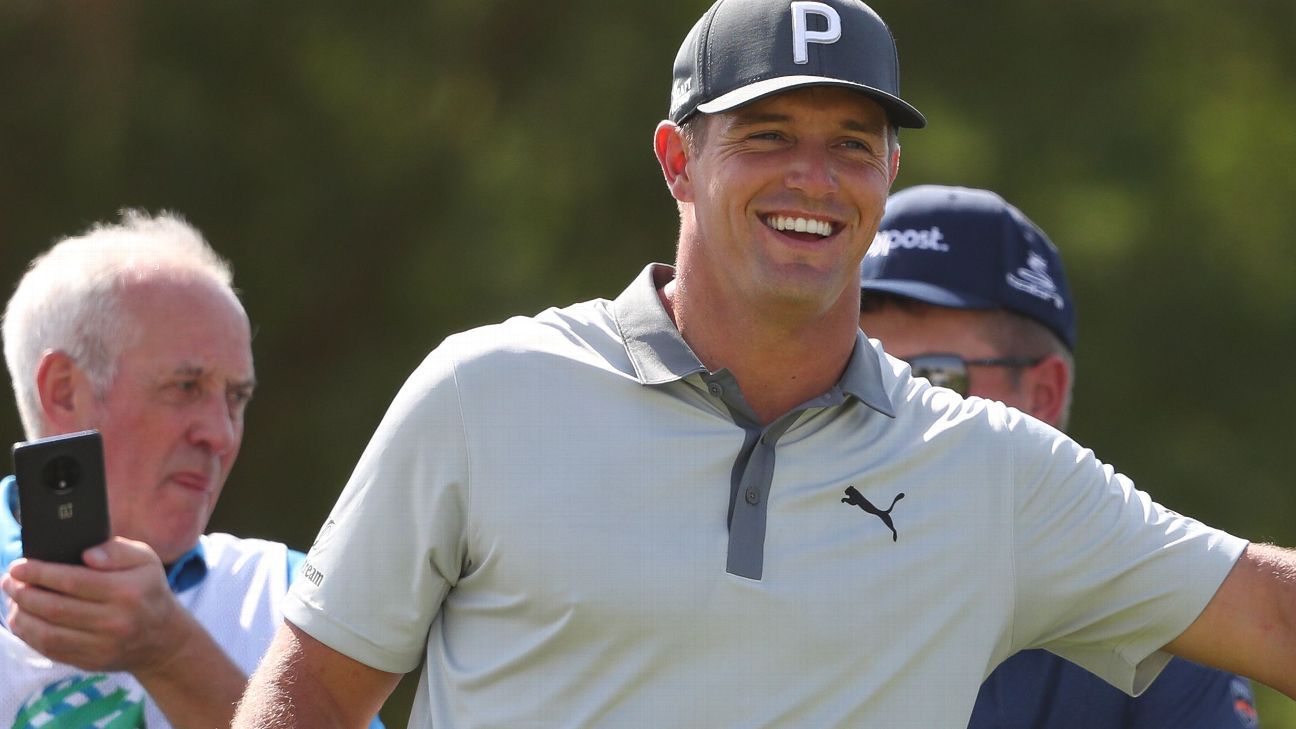 The Super Golf League, which is being backed by Saudi Arabian money and fronted by Greg Norman, was dealt a pair of serious blows Sunday when two of golf’s biggest stars believed to be connected to the proposed breakaway circuit pledged their support to the PGA Tour.

Two-time major champion Dustin Johnson and 2020 U.S. Open champion Bryson DeChambeau both released statements in which they said they would continue playing on the PGA Tour.

“While there has been a lot of speculation surrounding my support for another tour, I want to make it very clear that as long as the best players in the world are playing the PGA Tour, so will I,” DeChambeau said in a statement released on social media. “As of now, I am focused on getting myself healthy and competing again soon. I appreciate all the support.”

Earlier on Sunday, the PGA Tour released a statement from Johnson, the 2016 U.S. Open and 2020 Masters champion, in which he said he wasn’t leaving.

“Over the past several months, there has been a great deal of speculation about an alternative tour; much of which seems to have included me and my future in professional golf,” Johnson said in the statement. “I feel it is now time to put such speculation to rest. I am fully committed to the PGA Tour.”

Other top players, including Brooks Koepka, Jordan Spieth and Will Zalatoris, have also said they’re not leaving.

Speculation about the Saudi-backed splinter league raiding the PGA Tour for many of its best players gained steam in recent weeks, especially after a handful of stars, including Johnson and DeChambeau, skipped the AT&T Pebble Beach Pro-Am to play in the Saudi International.

But then several top players, most notably McIlroy, Morikawa, Rahm and Thomas, were very outspoken about the divide on the PGA Tour at this week’s Genesis Invitational at Riviera Country Club.

McIlroy went as far as to call the proposed Saudi-back circuit a “not-so- super league.”

“Certainly, for the younger guys, like it just seems a massive risk,” McIlroy said. “I can maybe make sense of it for the guys that are getting to the latter stages of their career, for sure. I don’t think that’s what a rival golf league is really. That’s not what they’re going to want, is it? They don’t want some sort of league that’s like a pre-Champions Tour.

“You look at the people that have already said no, Rahm, No. 1 in the world, Collin Morikawa, myself. Like you’ve got the top players in the world are saying no, so that has to tell you something.”

The obvious remaining issue is if Norman and his company, LIV Golf Investments, can still pull away enough less-profile players to cobble together some sort of competitive tour. The new circuit, commonly referred to as the Super Golf League, planned to play 14 events, including many in the U.S., potentially on golf courses owned by former U.S. President Donald Trump.

Australia’s Adam Scott said earlier this week that the shortened season was intriguing. The Super Golf League also planned to have 54-hole tournaments with 40-man fields, no cuts and potentially $20 million purses.

Phil Mickelson has been one of the biggest critics of the PGA Tour and seemed to be leading the charge for the Saudi-backed circuit. In an interview with Golf Digest, he accused the PGA Tour of “obnoxious greed” for not allowing players to use their media rights without paying the tour for licensing fees.

In an interview in November with author Alan Shipnuck, who is writing an unauthorized biography of the six-time major champion, Mickelson called the Saudi Arabians “scary” and said he was only using the Super Golf League as leverage in dealing with the PGA Tour. Excerpts of his interview with Shipnuck were published on the website The Fire Pit Collective earlier this week.

Mickelson told Shipnuck that he enlisted three other unidentified players to help pay for attorneys to draft an operating agreement for the new league.

Mickelson, 51, has skipped the last three PGA Tour events and hasn’t started a tour event since the Farmers Insurance Open at Torrey Pines.

Ukraine War: Where are Russia making gains?
Man who helped stop the Club Q shooter: I’m just a normal guy
Three arrested after bodies of two babies found at house in South Wales
Up to 100,000 nurses to strike next month – is your local NHS employer affected?
These are the best electric bike sales for Cyber Monday that are already running [Updated]