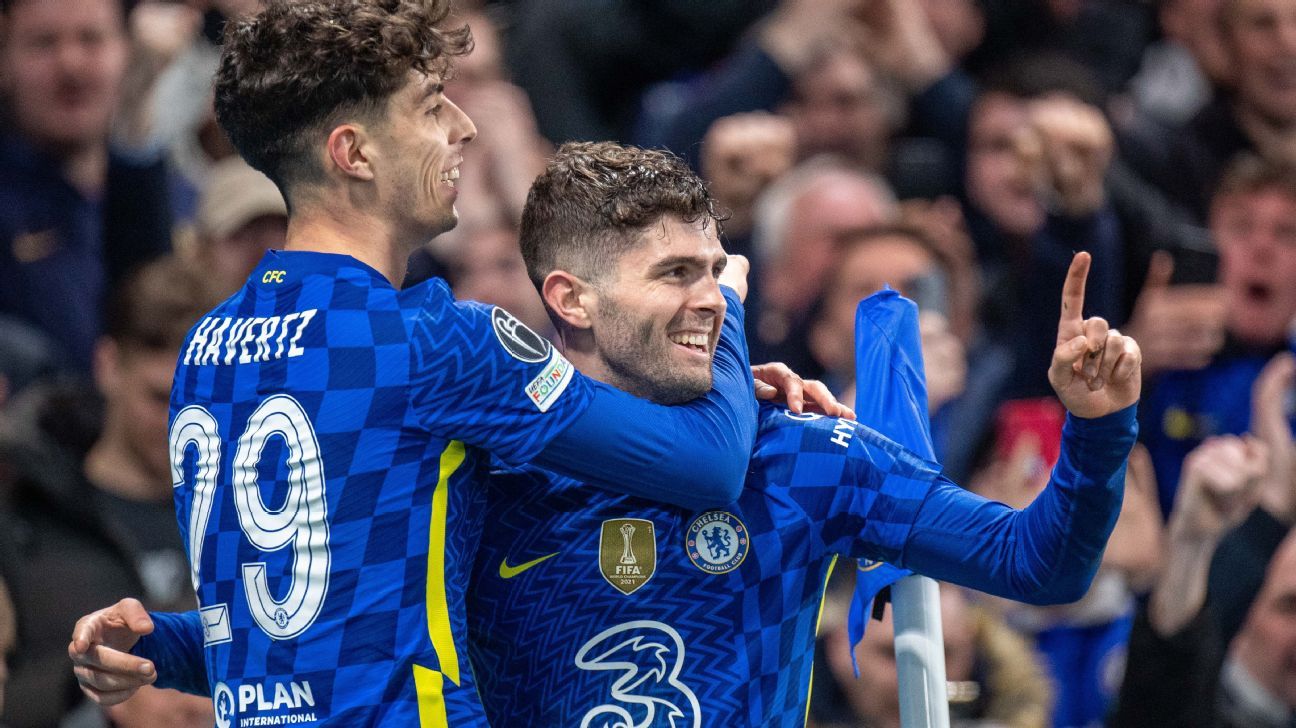 LONDON — It is the dichotomy at the heart of Christian Pulisic‘s career right now that at the same time he is learning not to feel the need to “save” the United States men’s national team, Chelsea are searching for a talisman as Romelu Lukaku continues to falter.

Pulisic revealed in an exclusive interview with ESPN earlier this month that he was trying to release himself from feeling he has to be the matchwinner on international duty. At Stamford Bridge, he is considered one of several stars, all of whom were supposed to operate in Lukaku’s shadow following his €115 million summer move from Inter Milan.

Yet Lukaku’s indifferent form led Blues boss Thomas Tuchel to omit his leading striker for Tuesday’s Champions League last-16 tie against Ligue 1 side Lille as he relied on Pulisic, Kai Havertz and Hakim Ziyech to lead Chelsea’s attack. Ziyech came to the fore when Lukaku went missing at Crystal Palace on Saturday, but here, Havertz and Pulisic struck as the Blues secured a 2-0 win that gives the defending champions a strong chance of progressing to the quarterfinals.

Lukaku’s omission came after he registered just seven touches against Palace, the fewest by a Premier League player involved for 90 minutes since records began in 2003. Havertz needed just five to open the scoring eight minutes in — and he had already had two efforts on goal by that stage.

The Germany international fired over from inside the six-yard box before forcing a fine save from Lille goalkeeper Leo Jardim moments later. From the resulting Ziyech corner, Havertz headed Chelsea in front.

It took Havertz only 13 minutes and one second to register eight touches as Chelsea produced far greater attacking cohesion in the same 4-1-4-1/4-3-3 shape employed at Palace.

Lille knocked the ball around intelligently at times in Chelsea’s half but never threatened Blues goalkeeper Edouard Mendy, with Thiago Silva imperious in defence and N’Golo Kante delivering another remarkable all-action midfield display. The latter set up Pulisic for the second goal 27 minutes from time, bursting through the heart of the Lille defence before slipping a pass to the 23-year-old, who dug out a clever curled finish past Jardim.

Pulisic also explained in that recent interview how he was struggling to find his rhythm due a lack of game-time following a positive COVID-19 test, injury and a struggle to break into the team. Tuesday was only the third time he has started back-to-back matches this season, and the benefit was clear in one of his most influential performances of the campaign so far.

It may also be no coincidence that while this was a slightly unusual role, operating as a slightly deeper central attacking midfielder, it was the same ask that was made of him at Selhurst Park. That consistency is something he has palpably been craving, having been utilised as a false nine and even a wing-back on occasion.

Inheriting the No. 10 shirt from Eden Hazard (Willian kept it warm for a year), a player who carried Chelsea to glory almost single-handedly at times during his seven-year stay before departing for Real Madrid in 2019, introduced him to unfeasibly high expectations in west London, but the influx of big-money signings since Chelsea’s FIFA transfer ban was lifted — Havertz and Lukaku both cost considerably more than the fee paid to Borussia Dortmund to secure Pulisic’s signature — now presents a chance of being a prominent member of an ensemble, which seems to suit Pulisic more.

This was his sixth Champions League goal, his first at home, and an overall display that will make him difficult to drop for Sunday’s Carabao Cup final against Liverpool (11:25 a.m. ET, stream live on ESPN+), when Tuchel hinted Lukaku could return.

“The focus was today on intensity, high-speed game and also hard work off the ball to have intensive team work,” Tuchel said. “Romelu struggled in the last games a little bit to deliver that.

“That’s what I meant when I said [before the game] he was a little bit tired. Not only mentally tired but physically tired, which I can understand. It is like this. Today we went for three other players. Kai is in very good shape and gives a lot of high-intensity metres for the team. For Sunday, we have four days to recover and of course [Lukaku] has every chance to play.

“It was not the moment after a match where everybody was focused on the few touches that he had to put him right away into the next fire. It was the moment to take a step back, that was the decision and that’s it.

“We have now a strong win, a strong performance and almost every question is about Romelu so the focus is huge. There are like nine other players who did not play. We should never forget that we consider this a team sport.”

The win came at a price. Mateo Kovacic hobbled off six minutes into the second half before Ziyech was also forced out through injury. Both are doubts for Sunday, but it did not affect things here with Pulisic and Havertz leading from the front.

Exemplifying that work rate off the ball that Tuchel described, shortly after scoring, Pulisic tracked down Renato Sanches with a lung-busting run before producing a slide tackle to dispossess him. A chant of “USA! USA! USA!” emerged from the Matthew Harding Stand in recognition of his efforts.

Displays like this will make Pulisic feel a little more at home.

DOJ asks for independent probe into FTX bankruptcy, a likely tactic to gather evidence on alleged fraud
Big advertisers including Amazon returning to Twitter, says report
‘May the Force be with you’: PM ‘sad’ as Javid to step down at next general election
Parking lots are becoming as important as cars in climate change efforts
Six children have died with Strep A bacterial infection