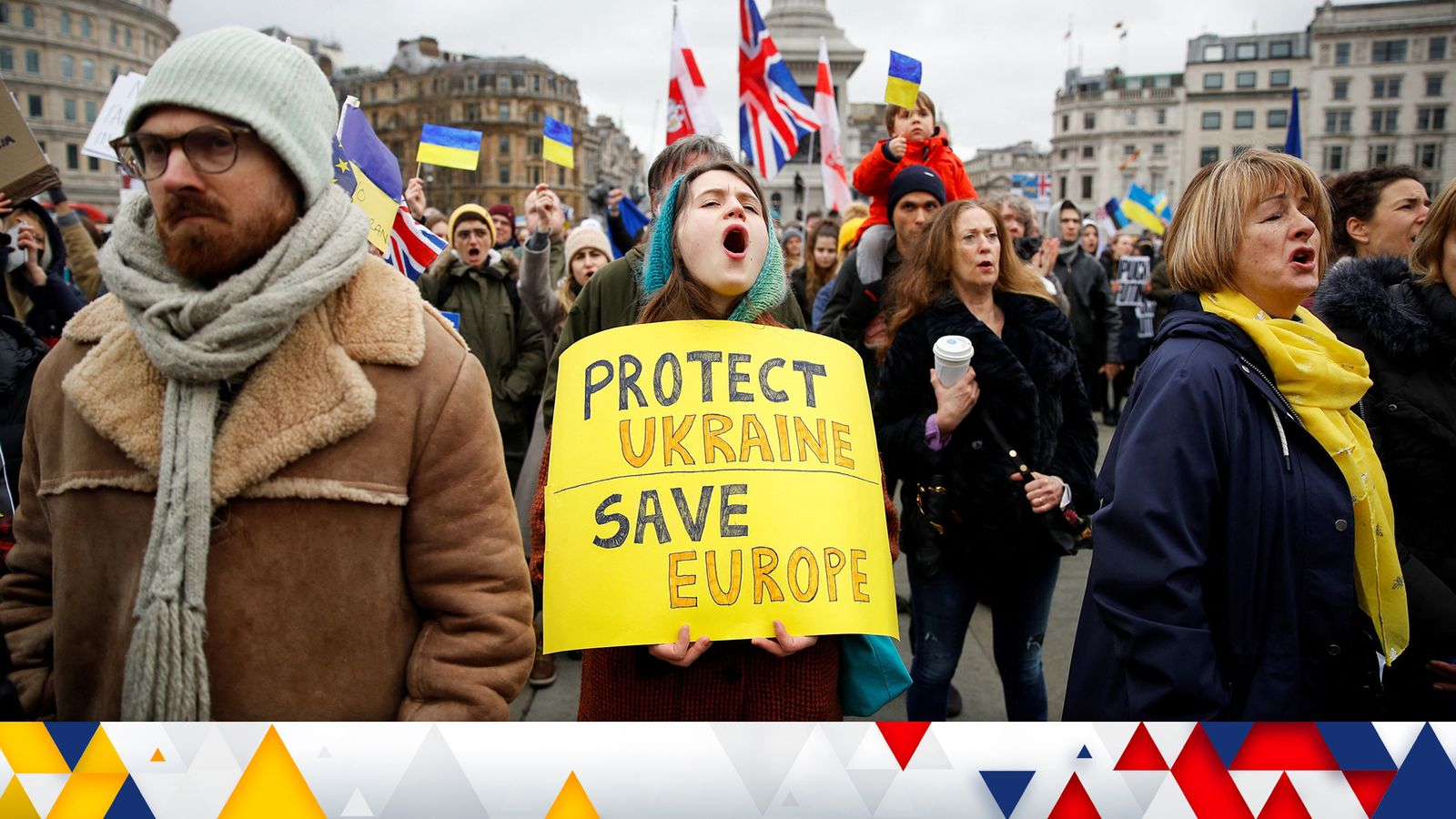 Hundreds of people gathered in central London to protest against Russia’s invasion of Ukraine.

Chants of “Stop Putin, stop the war” and “Ukraine is Europe” echoed around Trafalgar Square, as demonstrators showed their solidarity with Ukrainians.

The protest began with the playing of the Ukrainian national anthem, and Archbishop Claudio Gugerotti, the papal nuncio to Great Britain, led prayers, saying: “Today we are all Ukrainians.”

Demonstrators unfurled a giant banner on the steps of the National Gallery reading: “When the last Ukrainian soldier falls, Putin will come for you ladies & gents.”

Others were carrying placards saying “Putin terrorist” and “Protect Ukraine, save Europe”, and many were draped in the blue and yellow national flag of Ukraine.

It was one of two protests planned this weekend in London, with similar rallies already taking place in Edinburgh, Manchester, and across the world.

London protester breaks down as she talks about her parents who are still in Ukraine dealing with “bombing” and tells us that she is still waiting on a reply from her mother to “see if she is alive.”https://t.co/X3flQUBL0r

Sky News reporter Sadiya Chowdhury spoke to an emotional protester, Natalya Courtney, who said: “My mother and stepdad are still in Sumy [Ukraine].

“It is being bombed and shelled, and they haven’t had water or electricity.

“It’s a very, very hard situation, I’m waiting to hear back from my mum to make sure she’s alive.”

Meanwhile her children Alicia and Genevieve said they wanted to attend the protest to “show people that what Putin’s doing is wrong”.

Many families who had relatives stuck in Ukraine were in attendance, as they chanted for freedom and for an end to the war.

The UK’s ‘golden era’ with China is over, Sunak warns
Inside Justin Jefferson’s record-breaking, physics-defying rise with the Minnesota Vikings
English cricket bowled over with £400m private equity bid for The Hundred
South Africa domination sums up ugly year for stuttering England
Making the perfect offseason moves for five of MLB’s most interesting teams