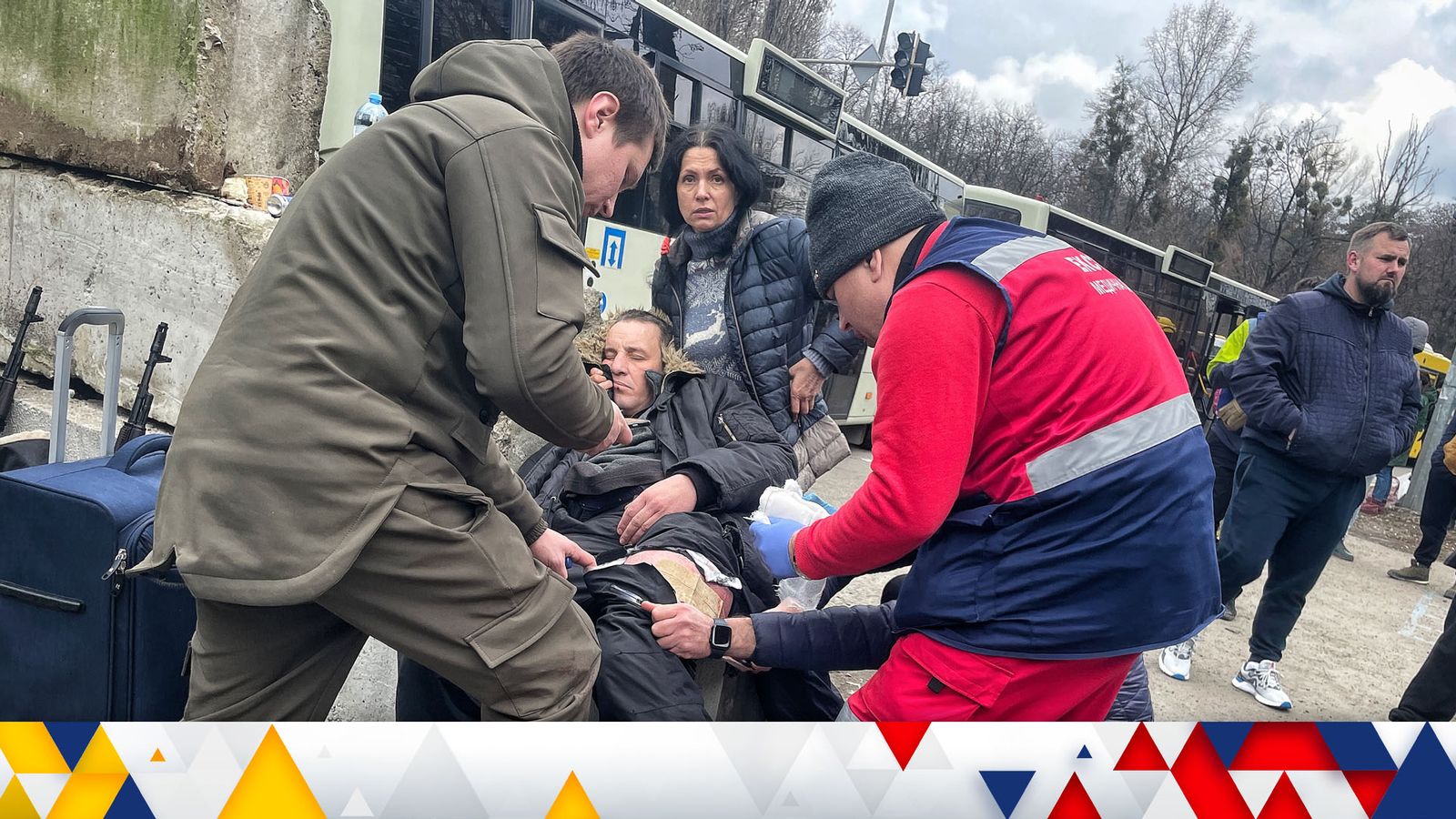 The Russian military continued shelling and firing at the only evacuation route for those trapped in Irpin, a satellite town about eight kilometres from the Ukrainian capital.

The town has come under increasingly heavy bombardment over the past few days with hundreds streaming out of the town to try to get away from the advancing Russian forces which appear to be headed for the capital Kyiv.

The Ukrainians blew up a bridge linking Irpin with Kyiv in an effort to slow the Russian troops and planks of wood were laid over the water and rubble as it was turned into a makeshift evacuation corridor.

But 24 hours after the route was crowded with anxious and terrified families, it was becoming more and more dangerous with repeated attacks on civilians trying to flee.

The mainly women and children trying to pick their way to safety and waiting for evacuation vehicles were seen throwing themselves on the muddy ground or ducking in terror as the shelling crept ever closer.

Children clutching their soft toys in one hand and a parent’s hands in the other were forced to run out of the town as mortar shells continued to land and the whistle of rockets overhead continued.

Toddlers were handed to soldiers and other strangers as civilians scrambled over tree trunks to try to get away from the line of fire.

“The Russian soldiers are everywhere,” one young man told us, breathing heavily from running. “And they are shooting everything.”

The Russian soldiers do appear to be making inroads in Irpin – with multiple witnesses telling us they’d seen troops inside and moving around the town.

A number said they’d first fled surrounding villages under attack before taking shelter in Irpin and then coming under fire there too.

One mother and her 15-year-old son had escaped from Romanika, just outside Irpin.

Ivan Wagner said of his home village: “All the houses are on fire… and that’s all I can say… so much destruction… it’s all destroyed… there’s nothing to build or save… there’s nothing left.”

His mother sobbed continuously as she told us how she’d had to leave her elderly mother and father behind.

They’d been too frail to make the dash across uneven wooden planks under the broken bridge.

She sat weeping and watching as casualties were brought in.

Soldiers and civilians with wounded feet, shrapnel in their legs, shots through their backs, some using their belts as homemade tourniquets.

Children and toddlers being comforted and often comforting their shocked and devastated parents and elder relatives.

“One, two, three breathe,” I heard one mother tell her little girl over and over again.

Some had small bags, others suitcases, some nothing at all but the clothes they stood up in.

Twenty-four hours earlier, we could walk down the same main street into the entrance to Irpin.

For much of the day, that was now a perilous journey.

Yet as one woman sat looking at us filming her on a coach taking her out of the combat zone and towards the capital, she waved cheerily and punched her fist into the air in an act of defiance.

This may be all that’s sustaining Ukrainians right now – that collective sense they’re not giving up.

They have no other option right now.