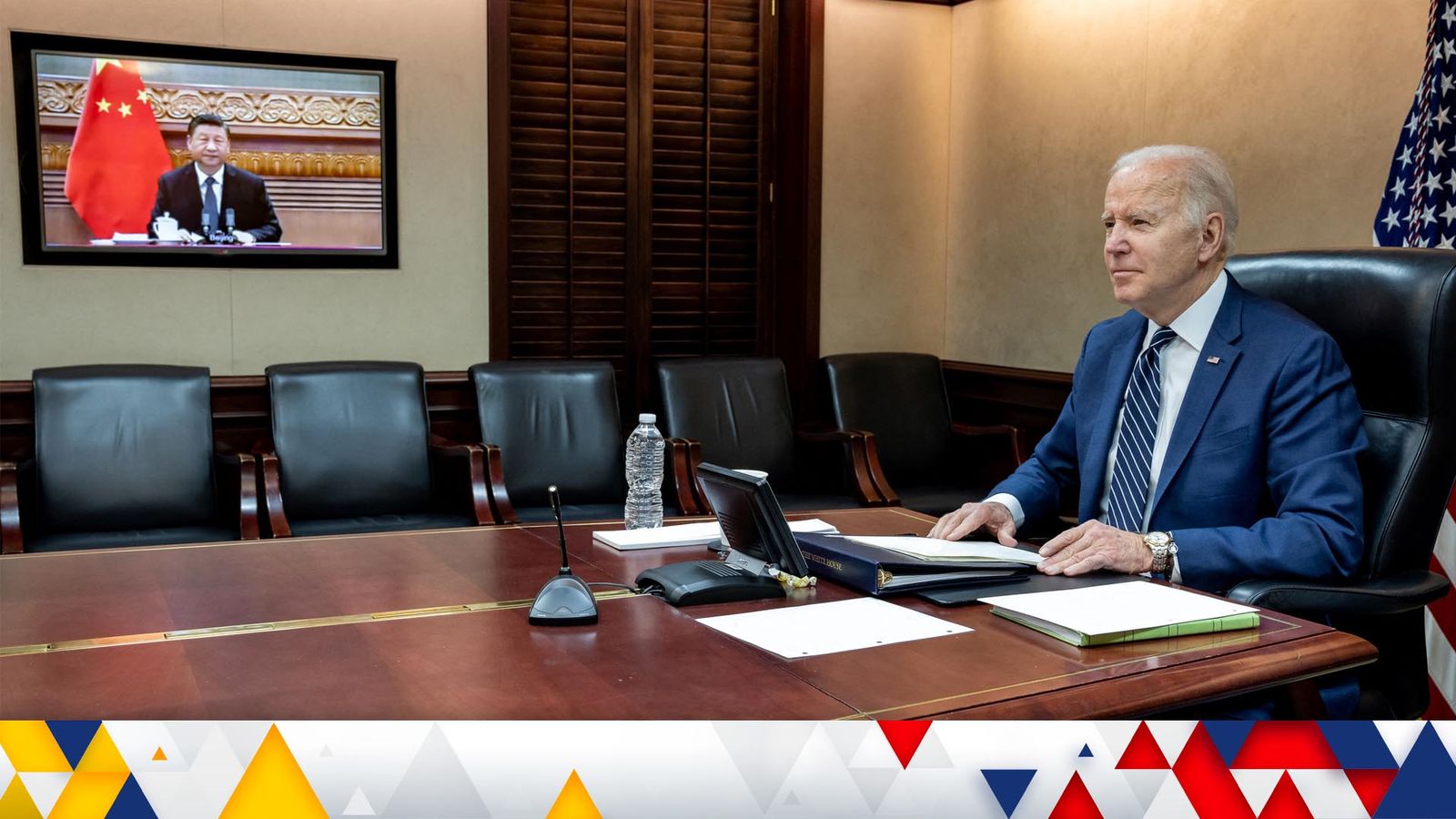 Joe Biden has told China’s president of the “implications and consequences” Beijing faces if it gives Russia material support for its war in Ukraine, as Xi Jinping said the conflict needs to end as soon as possible.

The pair spoke for almost two hours in a video call as the US sought to deter China from providing military or economic assistance for President Vladimir Putin‘s invasion, where there have been “brutal attacks on civilians”.

A White House statement said the American president had laid out efforts to prevent and then respond to the invasion, including by “imposing costs” on Russia, believed to mean sanctions.

“He described the implications and consequences if China provides material support to Russia as it conducts brutal attacks against Ukrainian cities and civilians,” it said. “The president underscored his support for a diplomatic resolution to the crisis.”

Those “implications and consequences” were not detailed in the statement.

The White House also said the two leaders agreed on the importance of maintaining open lines of communication, to “manage the competition” between the two countries.

According to Chinese state media, Mr Xi told his American counterpart: “The top priorities now are to continue dialogue and negotiations, avoid civilian casualties, prevent a humanitarian crisis, cease fighting and end the war as soon as possible.”

Russian leader Mr Putin has not called his military offensive, now in its fourth week, a “war”, instead referring to it as a “special military operation”.

Earlier on Friday, he hailed the country’s “special operation” in Ukraine at a rally marking the anniversary of the 2014 annexation of Crimea.

And he said the US and NATO should have discussions with Russia to solve the “crux” of the crisis and resolve the security concerns of Russia and Ukraine.

China earlier accused the US of provoking Russia and fuelling the conflict by sending arms to Ukraine.

“China has called for every effort to avoid civilian casualties all the time,” foreign ministry spokesperson, Zhao Lijian, told reporters.

“Which do the civilians in Ukraine need more: food and sleeping bags or machine guns and artillery? It’s easy to answer.”

Ahead of the video call, White House press secretary Jen Psaki said Mr Biden would question Mr Xi about Beijing’s “rhetorical support” of Mr Putin and an “absence of denunciation” of Russia’s invasion, which began on 24 February.

With Russia trying to regain the initiative in a stalled campaign, three missiles landed at an airport near the western city of Lviv, which has until now been far from Ukraine’s battlefields further east.

Read more:
What are the chances of a peace deal with Russia to end the conflict?
US officials concerned by ‘Russia’s request for military assistance from China’

Russia’s defence ministry said it was “tightening its encirclement” around the besieged southern port of Mariupol, where officials said more than 1,300 people may still be trapped in a bomb shelter under a destroyed theatre.

Ukraine said it had rescued at least 130 people from the basement after the building was flattened, reportedly by a Russian airstrike, on Wednesday. Moscow denies attacking the theatre, insisting it does not target civilians.

In the days after Mr Putin sent tens of thousands of his forces into neighbouring Ukraine, the Chinese government tried to distance itself from the offensive but avoided criticising Moscow.

At other times, Beijing has repeated unverified Russian claims that Ukraine ran biological weapons laboratories with US support.

Earlier this week, the US said its intelligence found China had signalled to Russia it would be willing to given military support and financial backing to help stave off the impact of the West’s severe sanctions.

Russia and China have both denied the claims.

Amazon media chief Jeff Blackburn retires from the company for the second time
DiCaprio’s scary plane landing
Conspiracy theorist who claimed Sandy Hook victims were actors says he’s bankrupt
Gaming’s Oscars night is upon us – here are our picks for the top awards
‘So many questions’: Harry asked about royals at awards ceremony