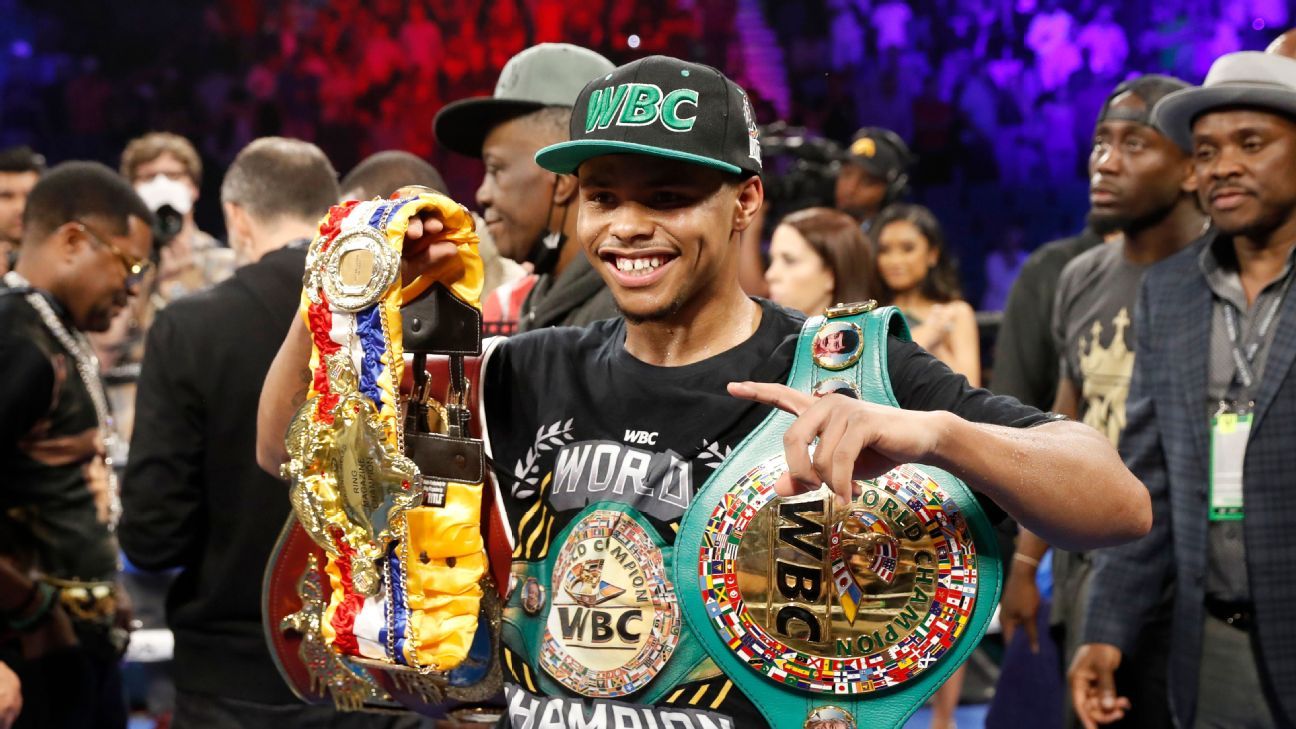 LAS VEGAS — The outcome was never in doubt.

The summit meeting at 130 pounds turned out to be a total mismatch as Shakur Stevenson used a superb southpaw jab and ring smarts beyond his years to dominate Oscar Valdez in the title unification matchup on Saturday at the MGM Grand Garden Arena.

While Stevenson (18-0, 9 KOs) didn’t answer questions about his chin, toughness, or ability to handle adversity, and it’s unclear when he’ll be forced to, through 18 pro fights, it’s clear Stevenson is one of the 10 best boxers in the world, pound-for-pound.

The uncanny blend of precision punching, along with the ability to measure distance with his jab and effectively mix in shots to the body, will be a tall task for any opponent. At 130 pounds, he’s clearly peerless.

Top Rank, Stevenson’s promoter since his pro debut in 2017, strategically placed him on one of their biggest shows of the year, an event preceded by Day 3 of the NFL Draft. And he delivered with a performance that showed off his incredible jab and boxing acumen. Stevenson even scored a knockdown in Round 8 after a cuffing right hook sent Valdez stumbling into the ropes, before a second right hand knocked him to the canvas.

If Stevenson is going to find a challenge, he’ll need to move up to 135 pounds and chase a third division title. One possible future opponent: Devin Haney, who was ringside. He meets George Kambosos Jr. for the undisputed lightweight championship on June 4 in Melbourne, Australia on ESPN.

“Devin is definitely a huge fight for me; Devin is a helluva fighter,” said Stevenson, a 24-year-old from Newark, New Jersey. “We can line it up in the future…. I’m a superstar in this sport. You line ’em up, name ’em, I’m ready for whoever…. I might go collect all the belts at 130, become undisputed. I deserve to be a superstar so this is what I gotta do.”

Since Stevenson claimed silver at the 2016 Olympic Games in Rio de Janeiro — a second-place accomplishment accompanied by the tears of disappointment — he’s been tracked for stardom.

Unlike the NFL and NBA, where drafted players often are inserted into starring roles on Day 1, plenty of patience is required to see if a boxer lives up to the hype. The first dozen or so fights of a boxer’s pro career are typically reserved for building the hype while gradually increasing the competition.

The art of matchmaking is a delicate balance. The modus operandi is to not only maintain the fighter’s undefeated record, but also develop his or her skills along the way. If the recipe is executed just right, the boxer is eventually ready for a genuine challenge at the same time his star profile is budding.

The process can take years. For Stevenson, the journey from pro debut to that first measuring-stick fight lasted five years and 18 fights. There’s no doubt now that Stevenson is a bonafide elite boxer following a victory over Valdez that was never remotely competitive.

During the process, as Stevenson feasted on journeyman opponents from the Midwest — a rite of passage for any top prospect — it was clear he was bound for greatness. It’s one thing, of course, to shine against foes hand-picked to make you look good. It’s quite another to put it all together against proven champions.

Besides, those early-development fights rarely afford the opportunity to answer some important questions. Does the boxer have a chin? What about toughness? How does he handle adversity?

At some point, Stevenson will have to answer those questions, but he didn’t have to on Saturday.

The stage is now set for Stevenson to crash the pound-for-pound list and vault to true stardom. More than 10,000 fans attended the fight in Las Vegas, the majority of those were supporters of Valdez. Stevenson didn’t mind the crowd rooting against him.

He fights a whole lot like a southpaw version of Floyd Mayweather and already possesses one of the best defenses in the sport. Now Stevenson needs tougher opposition to reach new heights.

Mayweather proved that defensive-minded boxers can also reach the star level. Stevenson made Valdez look silly at times, and he was in control from the opening bell.

Stevenson is no longer next up. Finally, he’s arrived.

Rishi Sunak says ‘racism must be confronted’ after Buckingham Palace row
‘Doctors are carrying out heart surgery by flashlight’: Liev Schreiber on his $1m fundraising for Ukraine
Russian oil sanctions are about to kick in. And they could disrupt markets in a big way
‘If you touch my hair that’s abuse’: Charity boss tells of ‘violation’ during Palace exchange
Gaming’s Oscars night is upon us – here are our picks for the top awards