Teachers and staff will be able to carry firearms into school after a maximum of 24 hours of training under new legislation.

The move is being opposed by major law enforcement groups, gun control advocates, and the state’s teachers’ unions – with just a handful of police departments and school districts supporting it.

The law requires up to 24 hours of training before an employee can go armed, and up to eight hours of annual training.

Training programmes must also be approved by the Ohio School Safety Center, the governor said, and schools can provide additional training if they wish.

Before announcing the new legislation, Mr DeWine outlined several other school safety measures he and politicians have promoted, including $100m (£82m) for security upgrades in schools and $5m (£4m) for colleges.

Ohio is also adding 28 employees to the school safety centre to work with districts on safety issues and to provide training under the new law.

The new law “is giving schools an option, based on their particular circumstances, to make the best decision they can make with the best information they have”, he said.

The governor said his preference would be for school districts to hire armed school resource officers, but insisted the law is another tool for districts that want to protect children.

He also emphasised that it is optional, not a requirement.

In response, a group of Democratic Ohio mayors came together on Monday to criticise the measure and the failure of Republican politicians to consider any gun control proposals.

They are instead seeking universal background checks, red flag laws to take firearms away from anyone who is perceived as a threat, as well as raising the legal age for gun purchases to 21, and banning assault rifles like the kind used in the Uvalde, Texas, school shooting in which 19 children and two teachers were killed.

“All of these things are common sense,” Toledo Mayor Wade Kapszukiewicz said.

“We’re in a situation where we can’t pass legislation that 95% of our citizens support.”

She said the Ohio governor had failed to make good on his promise to address gun violence after a mass shooting in Dayton killed nine people and wounded more than two dozen in August 2019. 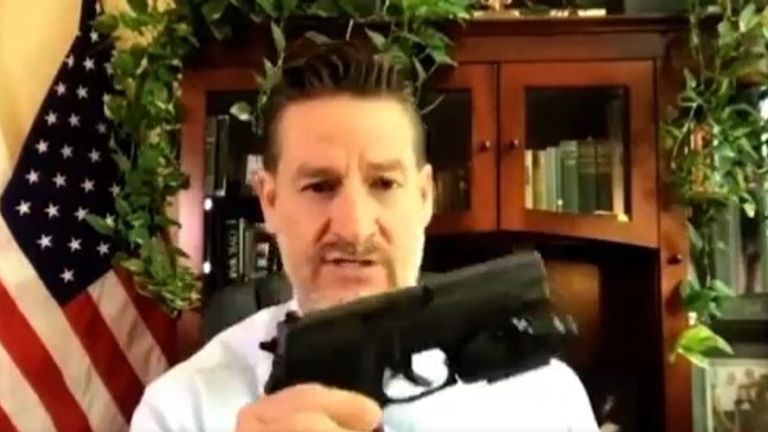 In the wake of the Dayton massacre, Mr DeWine announced his “STRONG Ohio” plan to address gun violence.

His proposals included higher penalties for violent felons caught with guns and ensuring that mentally ill people cannot have guns if a court deems them dangerous to themselves and others.

The governor said that cracking down on violent felons is also a way to protect children.

“We’re seeing a lot of children who are killed not in school, but in their own homes, on their own streets,” he said.

Voters to head to the polls in two crucial by-elections
Millions are facing acute hunger in the worst drought in over a generation
Ukraine War: Hidden tanks near the front line
The best mid-drive electric bike on a budget: Ride1Up Prodigy XR e-bike review
What are my rights if BA strikes hit during the summer holidays?