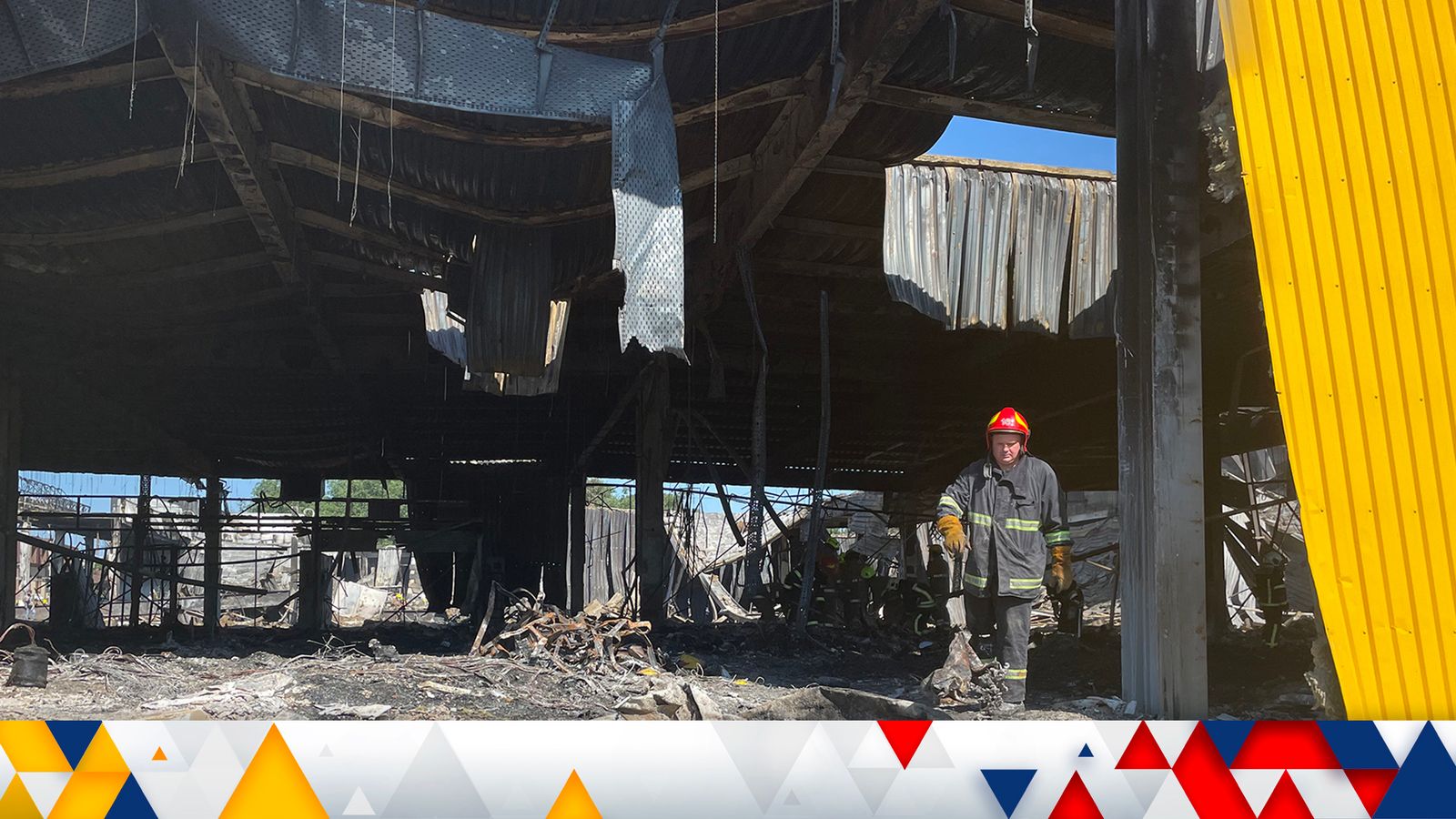 When they began recovering human remains, it became clear there was little hope of finding more survivors

“The temperature was too high,” one rescuer tells us.

The fire that ripped through the shopping centre in Kremenchuk, after the missiles hit, has reduced it to ash and rubble.

There is so little left to find; it’s now a grim recovery operation.

Not all the casualties are intact and recognisable, we are told, making it hard for rescuers to understand exactly how many people lost their lives in this attack.

But dozens of people remain unaccounted for.

A local police station is collecting DNA from relatives who have reported their loved ones missing.

Outside a nearby hospital, I meet a family gathered in the shade. They’re crying. Without prompting, a woman reaches for her phone and shows us a photo. It’s her 22-year-old daughter, Tetyana, with a big smile and long dark hair. She’s missing.

“We’ve been to all the hospitals, they said she isn’t there,” her inconsolable mother Liudmyla says.

“Bodies in the mortuary haven’t been identified by DNA yet. Russia, animals…”

Tetyana worked in a mobile phone shop in the shopping centre. “I called her at maybe 2pm,” Liudmyla says.

“We spoke after the first air raid siren. After the second siren I couldn’t reach her.”

Liudmyla came to the hospital when she heard two young women had been moved here. But after checking with doctors, she soon realised that neither was Tetyana; they had the wrong hair colour.

There are 25 patients from Monday’s attack.

Ihor, wrapped in bandages, tells me he saw the missiles hit.

“When they struck I was inside – the first and then the second (strike),” he says.

“I began to head to an exit through the smoke. My leg was already wounded. I bumped into a girl on my right side and I pulled her out with me. She didn’t say anything. I was one of the first to escape.”

Ihor had been shopping for computer accessories. Now, he’s in a cramped hospital room with two other casualties, bandages on his arms and legs.

This is how rapidly and ruthlessly life can change for Ukrainians in this needless war.

“I’m just morally shocked,” he says. “Physically I will survive, but what I’ve seen with my eyes…”

Overcome with emotion, he does not finish the sentence.

War crimes investigators are at the scene and one told me there is no evidence, so far, to suggest the site had any military connection.

Russia has said the fire was caused by a strike on a legitimate military target – an arms depot for Western weapons.

We took a drive around the area and saw no other evidence of recent damage to any buildings or warehouses beyond the shopping centre itself.

The mayor of Kremenchuk told me people who have witnessed fighting in the east fled to his city for safety and have now been caught up in this bombing. It is a cruel irony.

Kremenchuk is an industrial city in central Ukraine with little strategic importance in this war.

“We don’t have Russians here but we still don’t feel safe,” one man tells me.

“We go to bed. Or we go shopping. And we know this could happen at any moment.”