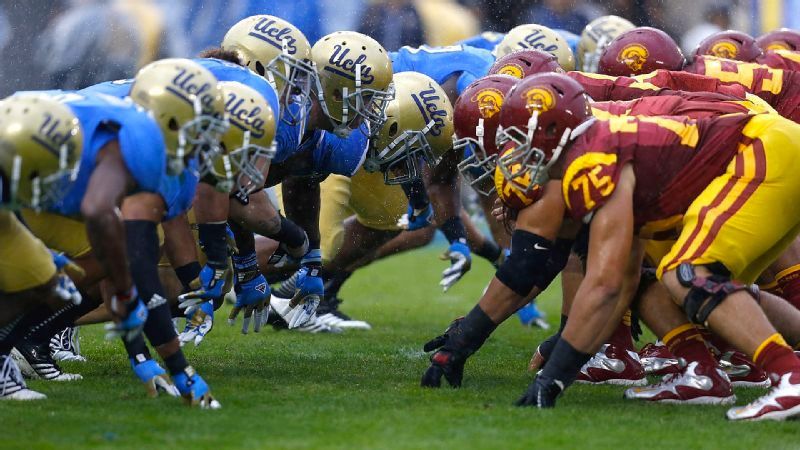 From the moment that Oklahoma and Texas ditched the Big 12 for the SEC nearly 11 months ago, chaos amid the collegiate landscape appeared both inevitable and imminent.

The countermove to the SEC’s big strike occurred on Thursday, with USC and UCLA formally announcing they’ll be joining the Big Ten in 2024. The flimsy Alliance formed between the Pac-12, Big Ten and ACC in reaction to the SEC’s move will now be remembered as college football’s version of New Coke.

The consequence of Thursday’s move will be that it accentuated a distinct power shift that has occurred in college sport — two leagues that had already separated themselves competitively now financially gobbling up four of the most valuable properties in less than a year. And by doing so, riddled the rest of the collegiate landscape with uncertainty, anxiety and aspirational wanderlust.

The Big Ten’s move is significant because it plants the league’s flag in Los Angeles, one of the most alluring markets in the country. And it further cements the college football landscape as a Power 2.

“The SEC and the Big Ten have separated themselves from an overall property standpoint,” Florida athletic director Scott Stricklin told ESPN on Thursday. “As we saw with Texas and Oklahoma a year ago, it’s not surprising that other schools would want to be a part of one of those two leagues.”

The ripples from the move reverberate everywhere through the sport, leaving a shaken collegiate landscape bracing for what could be next. From the future of the College Football Playoff to uncertainty in the ACC to a downtrodden Pac-12 to Notre Dame’s independence, the move echoes through every corner of the sport.

Here’s a look at what’s next from more than a dozen interviews with the sport’s power brokers.

What’s next for the College Football Playoff?

There wasn’t much surprise in the tone of SEC commissioner Greg Sankey’s voice when reached on Thursday night. When asked about the future of the playoff, he said: “Who knows? I’m not the one that voted against it.”

Sankey has been angry about the 12-team College Football Playoff plan falling apart, and he’s used that line frequently to express his dismay. The further we get from the decision not to expand to a 12-team playoff, the worse it looks for leagues outside the Power 2.

The CFP contract ends after the 2025 season, and it will be fascinating to see how drastically the landscape has changed by the time 2026 rolls around. Anyone who projects the status quo here is naive.

“I see a world where the whole thing splits in half,” an industry source said. “There’s 35 or 40 programs in the top echelon that are actually driving the College Football Playoff, and all the economics around the CFP. Everything else flows off of that. It’s obvious why it’s happening now.”

Most major realignment moves can be tied directly to television money. And that means the likelihood of the two big television investors — ESPN with the SEC and Fox with the Big Ten — could potentially tailor a new type of postseason. There’s an increased chance of those two leagues exploring a more elaborate conference postseason — a four-team or eight-team conference playoff — before some type of national title game between the winners. Could that squeeze the other leagues out of the playoff or demand more spots?

“I would think they’d be silly not to at least explore that,” another industry source said. “If I’m the TV consultant, I’d say to them, ‘You can set up your own eight-team playoff and make millions.”

Regardless, no one can argue that rookie commissioners Jim Phillips of the ACC and George Kliavkoff of the Pac-12 made a massive strategic blunder by not being bullish about jumping aboard the 12-team plan. In real time, the Alliance they formed with the Big Ten’s Kevin Warren was puzzling. In hindsight, it will be second-guessed for years after Warren plundered the Pac-12’s most valuable property and has left the ACC vulnerable and shaken. With alliances like those, who needs enemies? Even worse, there’s clearly going to be less of a chance of a guarantee for conference champions in the CFP. As power shifts further to the SEC and Big Ten, worries about postseason access will increase.

“I think these guys are suffering the consequences,” a high-ranking industry source said, “of a bad decision.”

What is the mindset in the ACC?

Changes are coming, and there’s an undercurrent of anxiety. That’s obvious. Both the ACC presidents and athletic directors have separate phone calls on Friday morning to discuss the future, according to sources.

How significant the changes are may depend on lawyers and contracts. It’s not a secret that some of the league’s power brands are exploring or hoping to explore their options to ensure a safer financial future. ACC schools project out to make somewhere in the neighborhood of half the amount of TV revenue of their Big Ten and SEC competitors in the upcoming decade-plus. The ACC TV contract with ESPN expires in 2036. (ACC schools make about $36 million right now from the league payout, which includes television money, bowl money and NCAA tournament units. We don’t know what the Big Ten will make yet until the deal is announced, but it is already massively ahead at nearly $54 million.)

For ACC schools to leave, they’d have to break both a contract with the ACC and a binding grant of rights. That’s something that could cost in the neighborhood of $100 million for an exit fee and plenty of legal wrangling to escape the grant of rights. The billable hours would be mind-boggling and the tab unprecedented. But if there’s $30 million-plus more available annually, would it be worth it?

For the ACC to keep Clemson, North Carolina, Miami, Florida State and Virginia happy — those would be the most logical targets for the SEC or Big Ten — may mean that the league will have to engage in some type of conversation about unequal revenue sharing. The theory being, why should Clemson make the same amount as Boston College when they don’t present the same value? Could the ACC distribute money based on performance to help, for example, Clemson stay more financially competitive with South Carolina and Miami and FSU with Florida?

Informal conversations about unequal revenue sharing have come up recently in the ACC, according to sources, and the urgency to give the big brands an opportunity for added revenue will likely only increase. It could also double as a lure to keep them from periscoping around for new addresses, but the history of unequal revenue sharing is that it’s not sustainable. Just ask Big 12 members from the Dan Beebe era.

Another plausible scenario that’s garnered early conversation is some type of merger with the remaining Pac-12 schools, which could perhaps change the complexion of the ACC enough to allow it to wriggle out of its under-market television deal. The leagues are up against the clock. The danger of trying to craft a new future is that there’s going to be a strong institutional hesitation to sign any significant grant of rights.

The likelier scenario is jockeying behind the scenes by schools eager to cross the moat to one of the Power 2 leagues. (Don’t underestimate North Carolina’s allure, as it could go to either league and offer perhaps the best markets and brand outside of Notre Dame.)

For schools, getting across the moat is a long-term survival issue, and it will be interesting to see whether schools do jump if they are brought in with the promise of full shares. Outside Notre Dame, there are few schools that command enough revenue to keep these massive contracts “whole” by adding enough value that they don’t cost current members money when the TV pie has to be cut an additional slice.

What does Notre Dame want?

The Irish have long been the prettiest date on the dance floor in college sports, as they bring an elite brand, national following and guaranteed strong ratings. Plus, they’re amid the football program’s best on-field run in a generation. (Expect Fox to want to continue the USC series, as that’s a marquee game between two of the sport’s best brands.)

It’s not expected that this move will prompt Notre Dame to react and attempt to join a league. Notre Dame athletic director Jack Swarbrick has said for years that there are two bedrocks of Irish independence — a broadcast partner that gives them a national audience and a fair and reasonable path to the playoff.

Notre Dame is well-positioned from a TV perspective, as its NBC deal ends in 2025. If the Playoff path closes completely, it would have an issue. But TV partners would likely still want Notre Dame included in any postseason. Unless that postseason gets too narrow. (The SEC likely wouldn’t block Notre Dame from the postseason, as it would then likely force the Irish to the Big Ten.)

If Notre Dame was to join a league, it’s unlikely to be the ACC. That’s especially with the way things are trending financially. If the Irish are still in the ACC in all their other sports, as they are currently, they are required to join the ACC in football if they join a league. But the Big Ten wouldn’t take Notre Dame as a football-only member, so it would have to pull out of the ACC and pay any relative fees and deal with any grant-of-rights issues for the non-football sports.

Notre Dame isn’t going to make a knee-jerk move, as it has thrived amid more than a century of independence. It is the best asset left, and there’s a drop to No. 2. So it will be compelling to follow.

How does the Pac-12 regroup?

Hard to overstate what a dismal day this was for the league.

Along with losing its biggest brands, it also could be lacking suitors when the league’s television rights expire after the 2023 football season. The timing has been terrible, and there’s little doubt that the league’s next-best brands — Oregon and Washington — will seek higher financial ground.

Former commissioner Larry Scott’s television deal arrived as historic and will sputter to an end with a legacy of costing the league two of its bedrock members.

The priority for the league after finding a way to keep Oregon and Washington happy will be to make sure that Arizona, Arizona State, Colorado and Utah don’t get tempted to the Big 12. (Quite a first week on the job for new Big 12 commissioner Brett Yormark, huh?)

A year into the job, we’ll see how creative and strategic Kliavkoff really is. He’s backed into a corner and needs to somehow keep the league together, preserve the seat at the CFP table and cash in on a television deal with diluted inventory.

The extra money USC and UCLA bring to the Big Ten is expected to mean less money that could be invested in Pac-12 rights. Why would Fox make a huge play at the Pac-12 if it already has the West Coast’s top market wrapped up? Could the league try to add San Diego State to get a foothold back in Southern California? Would Boise State loom as a potential addition? UNLV’s market and facilities make sense, but its football history is generally dismal. Could the league make a Texas play for one of the Big 12 schools or SMU?

There’ll be TV suitors, of course. And there are still attractive markets. But this completely changes the league’s paradigm.