Boris Johnson has said he is “determined” to fulfil his Conservative Party’s winning 2019 mandate in his final few weeks as leader – as he refuses to back any one leadership contender.

Speaking to broadcasters for the first time since his resignation last week, Mr Johnson said he will continue to “oversee the process” before a new Tory leader is elected in the coming weeks.

“I’m determined to get on and deliver the mandate that was given to us, but my job is really just to oversee the process in the next few weeks, and I’m sure that the outcome will be good,” he said during a visit to the Francis Crick Institute in London.

“We just need to get on and as I said I think before to you, the more we focus on the people who elect us, on their jobs, their hopes and what they can get out of investment in science and technology… the more we talk about the future that we’re trying to build, the less we talk about politics in Westminster, the generally happier we will all be.”

When asked repeatedly who he will be backing in the Tory leadership race, Mr Johnson said: “I wouldn’t want to damage leadership candidates’ chances by offering my support”.

Last Thursday, Mr Johnson announced his resignation as prime minister after less than three years in Number 10, saying: “No one in politics is remotely indispensable.”

Speaking from Downing Street, he thanked the millions of people who voted Conservative at the last election, and said the reason he fought so long to remain in office was because “I thought it was my job, my duty and my obligation to you”.

He also said he had tried to persuade his cabinet it would be “eccentric” to change prime minister now, but added: “I regret not to have been successful in those arguments.

“At Westminster, the herd instinct is powerful and when the herd moves, it moves.”

Asked on Monday about the accusation that his MPs who resigned from government roles had succumbed to a “herd mentality”, Mr Johnson refused to comment further.

“I don’t want to say any more about all that,” he said.

“There’s a contest under way and it’s happened, and, you know, I wouldn’t want to damage anybody’s chances by offering my support.

A Number 10 source said last week that the PM had spoken to the chairman of the Conservative backbench 1922 Committee, Sir Graham Brady, prior to his resignation and agreed for a new Tory leader to be in place by the party’s conference in October.

But several of his MPs want him to leave immediately, saying after so many resignations from his government, he does not have the authority to lead.

Former Conservative Prime Minister John Major wrote to Sir Graham last week saying allowing Mr Johnson to remain in post for three months would be “unwise, and may be unsustainable”.

Meanwhile, Labour leader Sir Keir Starmer has also threatened to call a vote of no confidence in the Commons, with the support of other opposition parties, if Tory MPs cannot oust him straight away.

Read more:
The frontrunners to be next PM
Ten questions after Johnson calls it quits

Over the weekend, rumours swirled that Mr Johnson could himself stand in the upcoming Conservative leadership race.

However, this would be against the Conservative Party election rules which state: “A leader who resigns is not eligible to contest the subsequent leadership election.”

A Number 10 source told Sky News that Mr Johnson will not attempt to stand in any leadership contest and that the claim he will do so is “untrue”. 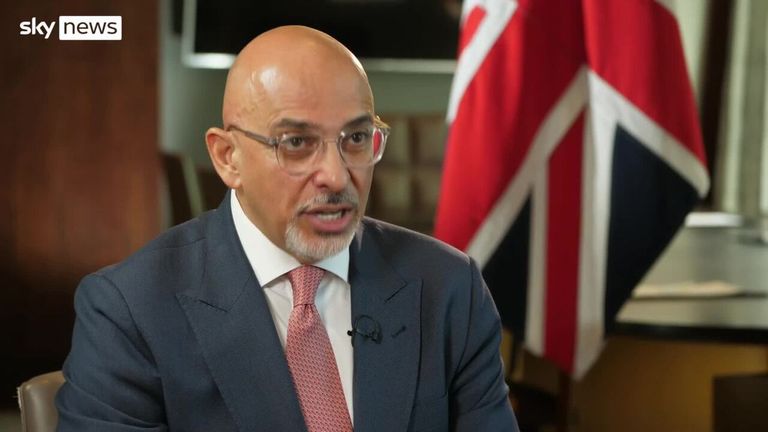 A surprise entry has also been made by Foreign Office minister Rehman Chishti, meaning 11 Conservatives are now fighting to replace Mr Johnson as prime minister.

Later today, party elders on the 1922 Committee of Tory MPs will decide the rules under which the leadership contest will be held.

Mr Blackman said the Conservative Party leadership candidates will be whittled down to a final two by next Thursday and that the threshold for support to enter the race is likely to be 20.

“We’ve got to slim down the list of candidates pretty quickly down to two – and the one thing that we’re committed to do is to achieve getting to two candidates by Thursday 21 July,” he told Sky News.

“That means that we’ll hold a succession of ballots over the next few days in order to get to that position.” 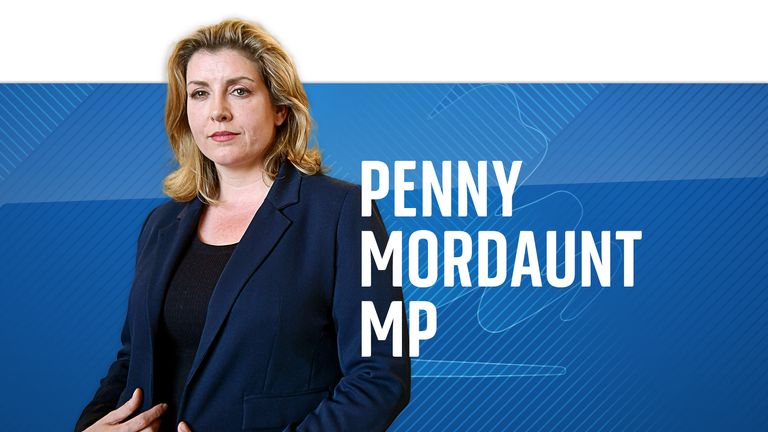 Penny Mordaunt has announced she is joining the race

Ballots are likely to be held this Wednesday and Thursday and next Tuesday and Wednesday, he said.

Elsewhere, Labour leader Sir Keir Starmer has criticised the “arms race of fantasy economics” in the Tory leadership election as he criticised candidates’ bids to “launder” the party’s integrity.

Taking questions from journalists during a speech in Gateshead, he said: “We have had this circus in the last few days, £200 billion of uncosted spending commitments.

“Every single Tory candidate making wild spending commitments should tell us precisely where they’re getting that money from.

“Is it cuts, if so what are they cutting? If it’s borrowing, tell us how much they’re borrowing? Or is it the magic money tree that they’ve suddenly discovered having arrived back down here from the moon, where they’ve been for the last 12 years.”

Tim Cook says Apple will use chips built in the U.S. at Arizona factory
The small pipeline playing an oversized role in the energy crisis
DiCaprio’s scary plane landing
Quick Charge Podcast: December 7, 2022
Why are people protesting in China?