The distraught family of a four-year-old killed in a missile strike in Ukraine have attended her funeral – while her unknowing mother remained in intensive care.

Liza Dmytrieva died in the Russian bombing of the central city of Vinnytsia on Thursday. The blast left her mother, Iryna, in a “grave condition” in an intensive care unit.

The family did not tell her Liza was being buried on Sunday, fearing it could affect her condition.

The pair had been heading to see a speech therapist who was treating Liza, who had Down’s syndrome, when they were caught in the blast.

At least 24 other people were killed, including two boys aged seven and eight, and more than 200 were wounded.

At Vinnytsia’s 18th-century Transfiguration cathedral on Sunday, the little girl was laid to rest wearing a crown of white flowers.

“Look, my flower! Look how many people came to you,” her grandmother, Larysa Dmytryshyna, whispered, caressing the girl as she lay in an open coffin with flowers and teddy bears besides her.

He said in a trembling voice: ”Because every burial is grief for each of us. We are losing our brothers and sisters.

”We know that evil cannot win.”

When the war started, the family fled Kyiv, the capital, for Vinnytsia in the southwest, which until Thursday was considered relatively safe.

Russia had been concentrating on the eastern Donbas region, but has begun pounding other sites in a push to wrest territory from Ukraine and crush the morale of its leaders, civilians, and troops as the war nears the five-month mark.

‘The new reality has started’ – listen to Ukraine War Diaries 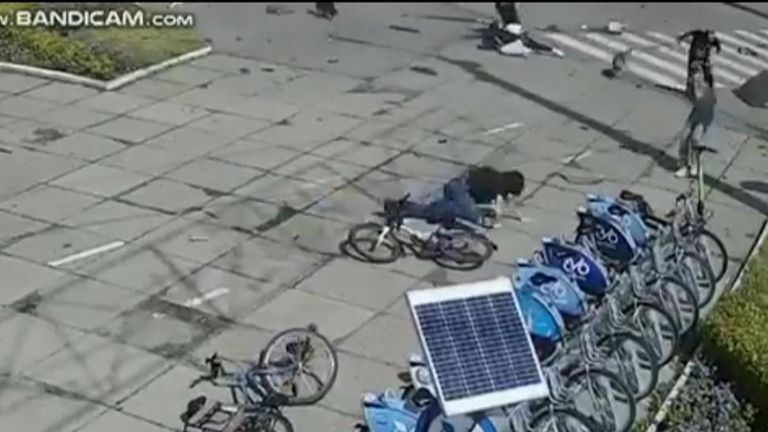 The cruise missile strikes on Vinnytsia were launched by a Russian submarine and were the latest incidents to take civilian lives and fan international outrage since President Vladimir Putin launched the invasion on 24 February.

Shortly before the explosions began, the family had posted a video on social media showing Liza straining to reach the handlebars to push her own pram, happily walking through the city, wearing a denim jacket and white trousers.

After the Russian missile strike, Ukraine’s emergency services shared photos showing her lifeless body on the ground next to her blood-stained pram.

The videos and photos have gone viral, the latest images from the brutal war in Ukraine to horrify the world.

Cost of living: Boris Johnson urged to call emergency meeting
Tesla didn’t say a word about Tesla Semi being equipped with Autopilot/Self-Driving
Fans on who could win Wales v England
Sam Bankman-Fried could face years in prison over FTX’s $32 billion meltdown — if the U.S. ever gets around to arresting him
German police raids target group suspected of far-right plot to overthrow government