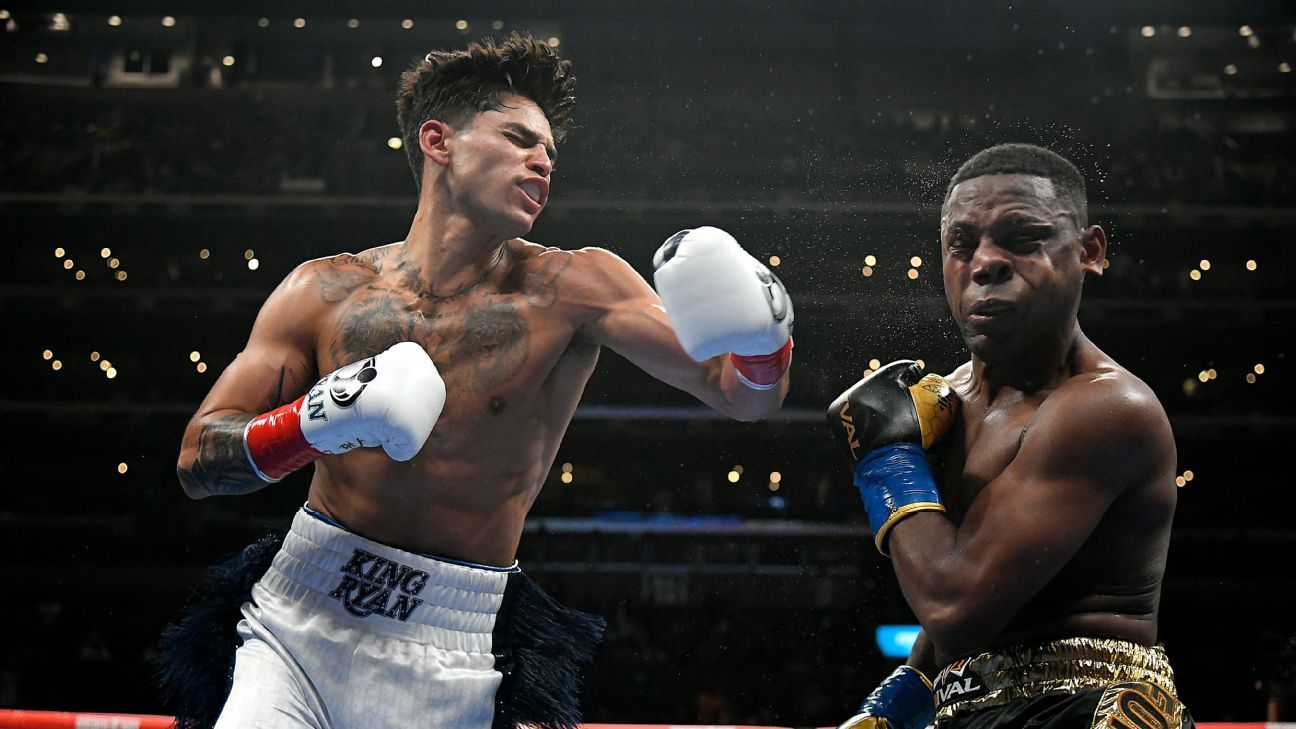 Even though Ryan Garcia looked better than ever with a sixth-round KO of Javier Fortuna on Saturday in Los Angeles, it feels like we’re moving farther away from a super fight against Gervonta Davis.

The impressive performance — knockdowns in Rounds 4, 5 and 6 — was Garcia’s second consecutive fight at 140 pounds after he campaigned at 135, where Davis still resides. “Tank” Davis did compete at junior welterweight once, a June 2021 TKO of Mario Barrios, but the weight disparity feels like yet another wrench in the spokes of any efforts to consummate a Garcia-Davis deal. “I’m never going back down to 135, I’m going to stay at 140, I’m going to fight ‘Tank’ Davis if he wants it at 140,” said Garcia, 23. “And if he doesn’t, then I’ll go fight some 140-pounder. But he’s going to want to do it … there’s going to be riots if he don’t want to do it.

“I know that I’m committed to it and I told everybody that that’s where my heart’s positioned and I’m not going to waver for nobody.”

It’s clear that Garcia genuinely wants to meet Davis in the ring, but it’s less certain how Davis feels about fighting a larger man at a higher weight — Garcia is 5-foot-10, Davis is 5-foot-5 and a half.

Davis did tweet afterward that he was ready for the fight.

See y’all the end of the year..#TheONE

The weight is simply one of many obstacles to the highly anticipated fight. Garcia repeatedly stated this week that he wouldn’t allow boxing politics — he’s promoted by Oscar De La Hoya’s Golden Boy Promotions while Davis is with Premier Boxing Champions (PBC) — prevent a deal from being reached.

That is easier said than done.

So that’s two obstacles to the potential super fight and the biggest roadblock of all: competing networks.

Garcia fights exclusively on DAZN, while “Tank” competes on Showtime. This same problem held up a potential middleweight title fight between Jermall Charlo and Jamie Munguia. Charlo is with PBC/Showtime, while Munguia is with Golden Boy/DAZN. The inability to agree on which network would televise that fight killed the deal.

And the same sticking point may block a fight between Davis and Garcia. The purse split will certainly provide yet another obstacle, although it’s clear who the A-side is. After all, Davis sold out Brooklyn’s Barclays Center for his May KO of Rolando Romero and packed over 15,000 into Crypto.com Arena in Los Angeles when he outpointed Isaac Cruz in December.

Garcia, meanwhile, attracted 11,288 fans at that same L.A. venue on Saturday. But if the sides can somehow compromise on the various issues, Tank-Garcia shapes up as a can’t-miss action fight between two of the youngest stars in the sport.

Two explosive punchers with lightning-quick hands and large followings to boot, it’s the kind of fight boxing desperately needs. Win or lose, the type of jolt an event of that magnitude would make Garcia a far bigger star than ever. He would be positioned nicely for many meaningful fights in a suddenly red-hot junior welterweight division.

The 140-pound ruler Josh Taylor could meet Jack Catterall in a rematch this fall but has vacated two of the four titles. There’s also Jose Ramirez and Jose Zepeda, who are lined up for another title rematch. Teofimo Lopez makes his 140-pound debut against Pedro Campa on Aug. 13, and plenty more top-notch fighters are campaigning in the division. Regis Prograis and Subriel Matias are both looking for big fights. Undisputed lightweight champion Devin Haney has indicated he’ll jump up to 140 pounds sooner than later (probably after a rematch with George Kambosos Jr. this fall). If Garcia can’t land Davis before the end of the year, those are some of the names he could be looking at, but it would be a consolation prize at this stage. After all the trash talk and insults, “Tank” Davis is the only opponent who matters for Garcia. And now that Garcia is once again active, with two fights in four months, along with a statement win over Fortuna, the time is ripe for Garcia and Davis to finally meet in one of the biggest fights in all of boxing. “That’s going to get me the respect I deserve,” Garcia said. “And I’m never afraid. I have the spirit of competition in me, and you’ll see that come out when I fight Tank and whoop his ass.”

Germany knocked out of World Cup in group stages after thrilling night in Qatar
Some Meta employees claim they’re not getting promised severance
Cramer talks about some hot industrial stocks, and how we’re playing Wall Street’s pivot from tech
‘Couldn’t be more excited’: Elton John to headline Glastonbury in last UK gig of final tour
Buyers struggling to afford homes after mini-budget despite prices falling