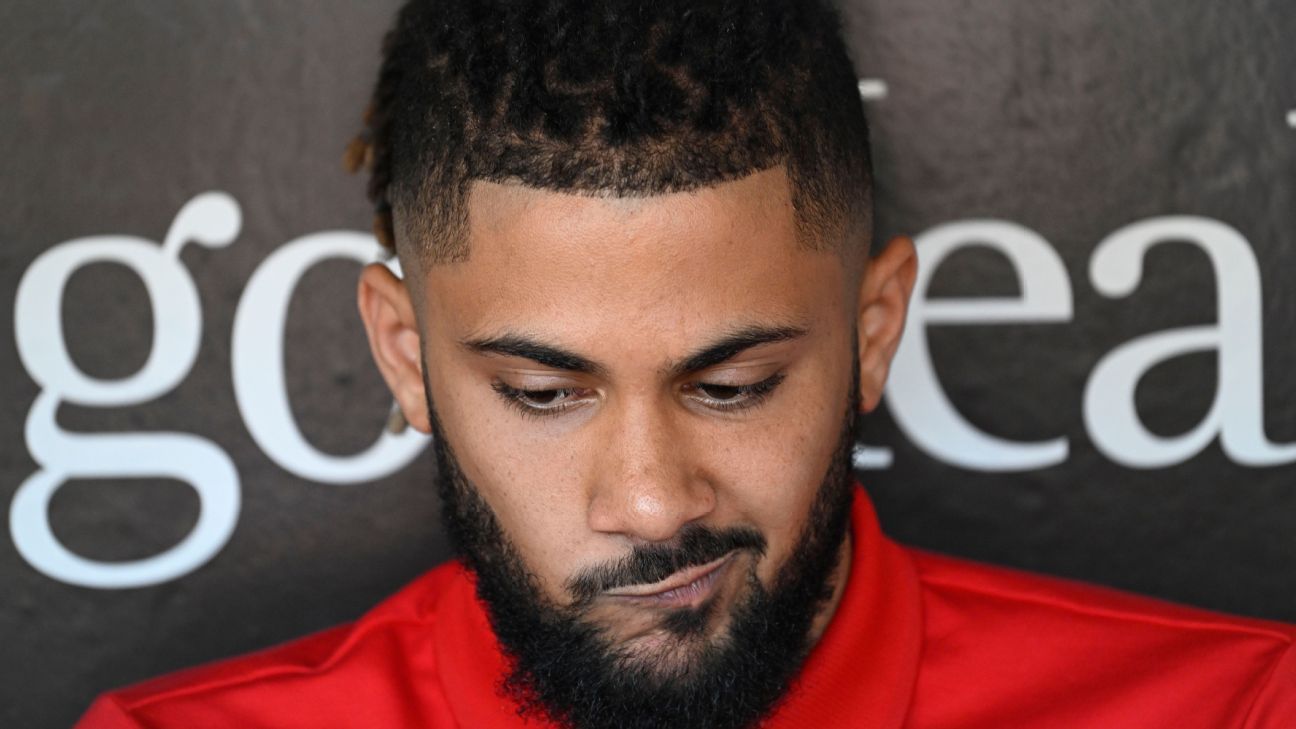 SAN DIEGO — Fernando Tatis Jr. sat atop the dugout bench on the first-base side at Petco Park on Tuesday afternoon and spoke unprompted for 250 seconds. He was measured yet unscripted, composed yet noticeably despondent. He lamented all the people he “failed” by testing positive for a performance-enhancing substance, and he vowed to make amends.

“I have seen how my dreams have turned into my worst nightmares,” Tatis said while flanked by Padres president of baseball operations A.J. Preller and surrounded by dozens of media members.

“There’s no other one to blame than myself. I haven’t made the right decisions these past few weeks, month, even starting in the beginning of the year. I have made a mistake, and I regret every single step I have taken in these days. But there’s a long way going forward. There’s a very long way going forward. I’m gonna remember how this feels, and I’m gonna make myself not ever be in this position ever again. I know I have a lot of love that I have to gain back. I have a lot of work to do.”

Eleven days earlier, Major League Baseball announced that Tatis, 23, had tested positive for the anabolic steroid Clostebol, triggering an 80-game suspension and instantly making him one of the most prominent players punished under its drug program, up there with the likes of Alex Rodriguez, Manny Ramirez and Robinson Cano. Tatis found out about his suspension in late July, he said, and briefly considered appealing it.

On the morning of Aug. 12, with the announcement of his suspension on the horizon, Tatis booked a flight out of San Antonio, where he was in the final stages of his rehab assignment, without alerting the team.

Six days later, when the Padres returned from their road trip, Tatis met in person with Preller. He followed by meeting Padres chairman Peter Seidler on Saturday, then conducted a 15- to 20-minute players-only meeting in the Padres’ clubhouse early Tuesday afternoon, moments before addressing the media for the first time.

“A lot of tough love,” Tatis, who took questions in two languages for about 20 minutes, said of those meetings. “But at the same time I feel like there was great communication. Fair words were out there. At the end of the day, they gave me a chance.”

Tatis stuck by his initial claim that the positive test was triggered by a skin medication that contained the steroid, one his father identified on a TV show in his native Dominican Republic as Trofobol. Tatis said he has been “dealing with skin infection” for some time and that he received the medication in the Dominican, beyond the purview of the Padres’ medical staff. He called not checking to ensure the medication did not contain a banned substance “a stupid mistake.”

Tatis reiterated that he tested positive for steroids because he was wrecklessly trying to combat a skin condition — he and his father previously specified that it was a ringworm — and not because he was trying to boost his performance or recover more quickly from the wrist injury that had kept him out all season. Asked what he would tell fans who don’t believe his version of events, Tatis said: “That I’m gonna give them a story to believe in me again.”

The delay between Tatis’ positive test and the announcement of his suspension was a result of him briefly navigating the appeal process — a process that, under the terms of a drug policy that was jointly agreed to by MLB and the MLB Players’ Association, is supposed to play out in secrecy, without the knowledge of the team. Tatis said he “felt like we had a very strong case” but was advised by what he vaguely referred to as his “team” that he was unlikely to prevail, prompting him to begin serving the suspension immediately.

“Every relationship worth having — there’s gonna be some great moments, there’s gonna be some challenging moments,” Preller said. “I’ve talked to Fernando a lot about mistakes. We all make mistakes. I’ve made plenty of mistakes here as the general manager of this team, as I’m sure Padres fans will let me know from time to time. But the key is how you learn from those mistakes, how you grow from those mistakes, what you do going forward.”

Tatis’ charisma, flair and otherworldly talent made him one of the faces of the sport at an early age and garnered him a historic 14-year, $340 million extension from the Padres in February of 2021. Tatis is the first player in baseball history to amass 80 home runs and 50 stolen bases through the first 300 games of his career. But by the end of this year, he will have played in only 273 of a possible 546 regular-season games through his first four seasons. He missed the final seven weeks of the 2019 season because of a stress reaction in his lower back, spent all of 2021 dealing with a balky left shoulder and will ultimately miss the entirety of 2022 for factors that were seemingly well within his control — a wrist injury that likely occurred during a December motorcycle accident, and now a positive drug test that will also rob him of the early part of 2023.

Tatis said Tuesday that he regretted getting on the motorcycle and revealed that he will soon undergo the shoulder surgery that he initially decided not to undergo at the end of the 2021 season. A date has not been set, but the expectation is that Tatis will be ready for full baseball activities by the start of spring training, which he is allowed to participate in despite still being under suspension.

“I was feeling it a little bit coming back,” Tatis said when asked why he decided to move forward with the surgery. “I wasn’t the best version out there.”

Tatis’ suspension was a major blow to a Padres team with championship aspirations. Less than two weeks earlier, Preller had significantly bolstered a needy lineup with the addition of Juan Soto, a 23-year-old who is already one of the premier hitters in baseball history. Josh Bell and Brandon Drury were added, as well. The expectation was that the Padres would field one of the most dynamic offenses in the sport once Tatis returned, pairing it with a decorated pitching staff that had also added Josh Hader.

Tatis’ suspension was revealed to the team 30 minutes before a Friday night game in Washington, D.C. After it was over, some of the players – most notably Joe Musgrove and Mike Clevinger – made pointed remarks about Tatis’ maturity and reliability. On Tuesday, the players struck a more sympathetic tone.

“People make mistakes,” Musgrove said. “It’s something that we’re definitely not gonna hold over his head for the rest of his career. I know there’s fans out there that will and people are gonna feel the way they wanna feel, but it’s something that I stressed to him — I think the most important people are the people in this room and the staff and the people that you’re gonna be playing with. I thought he did a really good job of explaining to us what happened and how sorry he was and the remorse that he showed. It’s not an easy conversation to have, but I think the first step to amending things in here and preparing everybody for when he does come back was having that conversation.”

Tatis was remorseful in his conversation with teammates, which was followed by a private meeting with Padres manager Bob Melvin. At one point, he asked his teammates for help — with the uphill climb that will undoubtedly follow, particularly with regard to his public image.