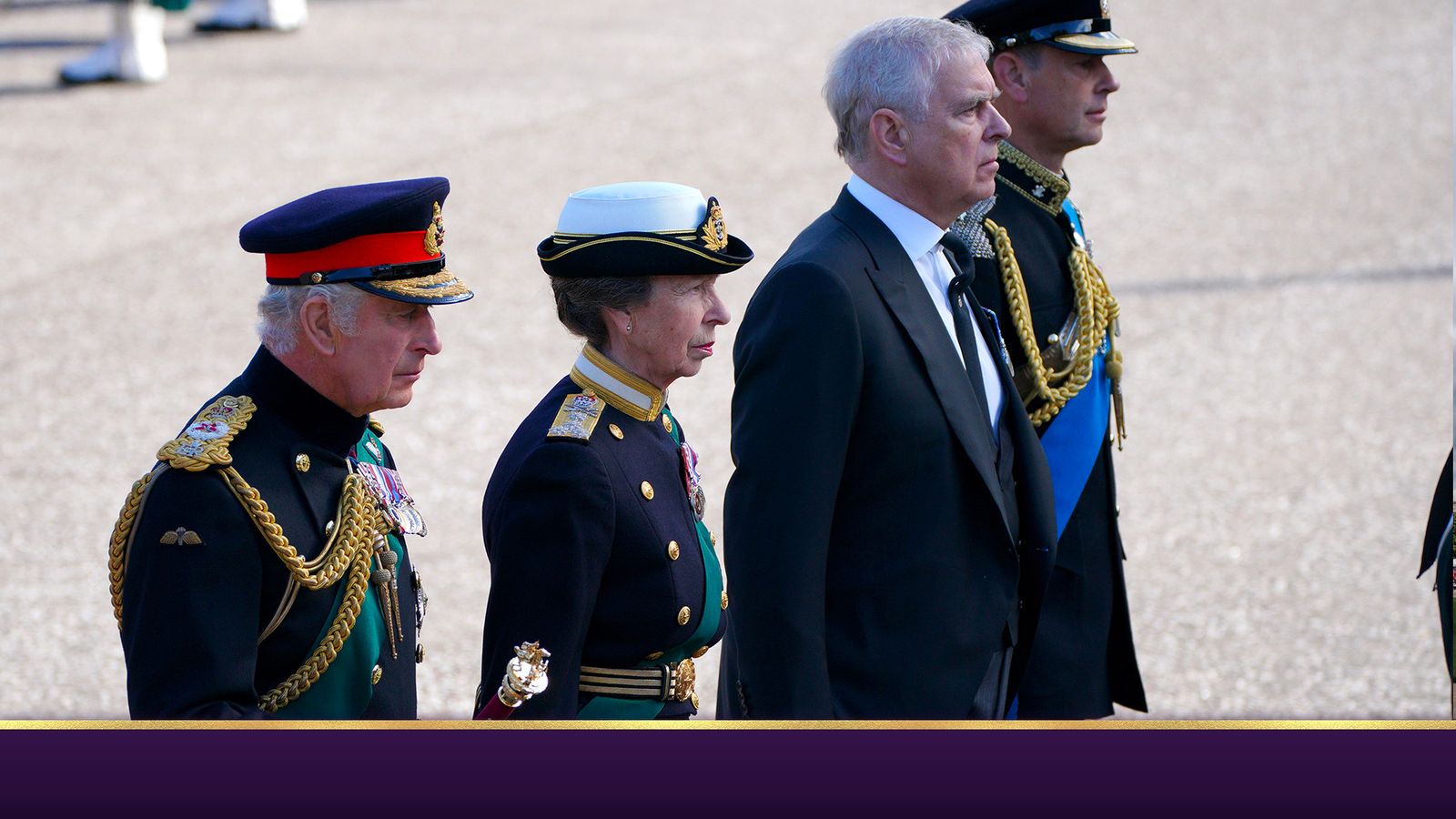 King Charles III led his family in a royal procession behind the Queen’s coffin as crowds lined the streets of Edinburgh.

The Queen’s coffin was taken from the Palace of Holyroodhouse to nearby St Giles’ Cathedral where her children and a congregation drawn from all areas of Scottish society, will now attend a service of thanksgiving for her life.

The King led the Duke of York, Earl of Wessex and the Princess Royal and her husband Vice Admiral Sir Tim Laurence on foot, while the Queen Consort and the Countess of Wessex followed in cars.

The royal siblings walked in a line behind the hearse carrying their mother’s coffin and a few steps behind was Sir Tim.

All of the siblings, except Prince Andrew, wore their military uniform. The Duke of York will not wear uniform at ceremonial events during the period of mourning, except for the final vigil. This is because the disgraced second son of Queen Elizabeth is no longer a working member of the royal family.

The coffin was draped with the Royal Standard in Scotland and dressed with a wreath of flowers consisting of white Spray Roses, white Freesias, white button chrysanthemums, dried white heather from Balmoral, spray eryngium, foliage, rosemary, hebe, and pittosporum.

The hearse was flanked by a Bearer Party found by The Royal Regiment of Scotland and The King’s Body Guard for Scotland.

People lined the route, periodically clapping and holding their phones high to capture the event. One woman shouted “God bless the Queen”, as the hearse made its way past.

Members of the public will be able to view the coffin to pay their respects from 5pm for 24 hours before it is taken to London to lie in state.

At the beginning of the service, Reverend Calum MacLeod welcomed the royal family, “representatives of our nation’s life” and “people whose lives were touched by the Queen in so many unforgettable ways”.

He said: “And so we gather to bid Scotland’s farewell to our late monarch, whose life of service to the nation and the world we celebrate.

“And whose love for Scotland was legendary.”

Thanksgiving service for the Queen

The royal couple arrived at the Palace of Holyroodhouse earlier today and took a moment to greet the waiting crowds outside.

People could be seen climbing on top of road barriers on the Royal Mile to catch a glimpse of the King and the Queen Consort arriving in Edinburgh.

They were seen shaking hands with well-wishers across the barrier, and the King received gifts of flowers from well-wishers ahead of attending a Ceremony of the Keys and inspecting the guard of honour.

The King and Queen Consort observed flowers outside the palace before speaking to members of the military.

A gun salute was fired from Edinburgh Castle moments after they arrived in Scottish capital.

Yesterday, the Queen began her final journey back to England with a six hour drive from Balmoral to Edinburgh.

Later in the evening, the King and other members of his family, likely his siblings, will hold a vigil at the cathedral in honour of the Queen.

It comes as his youngest son, Prince Harry, paid tribute to his father, saying: “We now honour my father in his new role as King Charles III.”

The pair have had a strained relationship, particularly in recent years since the Duke and Duchess of Sussex stepped back as senior royals.

‘Your grief is deeper’

King Charles and Camilla, the Queen Consort, spent the morning in London where the new monarch visited Westminster Hall. Both Houses of Parliament expressed their condolences, with the king, in turn, paying tribute to his late mother.

“Deep as our grief is, we know yours is deeper,” said Commons Speaker Sir Lindsay Hoyle, extending his “heartfelt sympathy” to the family.

“There is nothing we can say in the praise of our late Queen, your mother, that you do not already know,” he said.

In response, the King said: “As Shakespeare said of the earlier Queen Elizabeth, she was a pattern to all princes living.”

More on the Queen:
How can you see monarch lying in state?
Football matches to resume
What happens next and what changes?

He added that his mother “set an example of selfless duty” as monarch, and vowed to follow her example of commitment to a constitutional government.