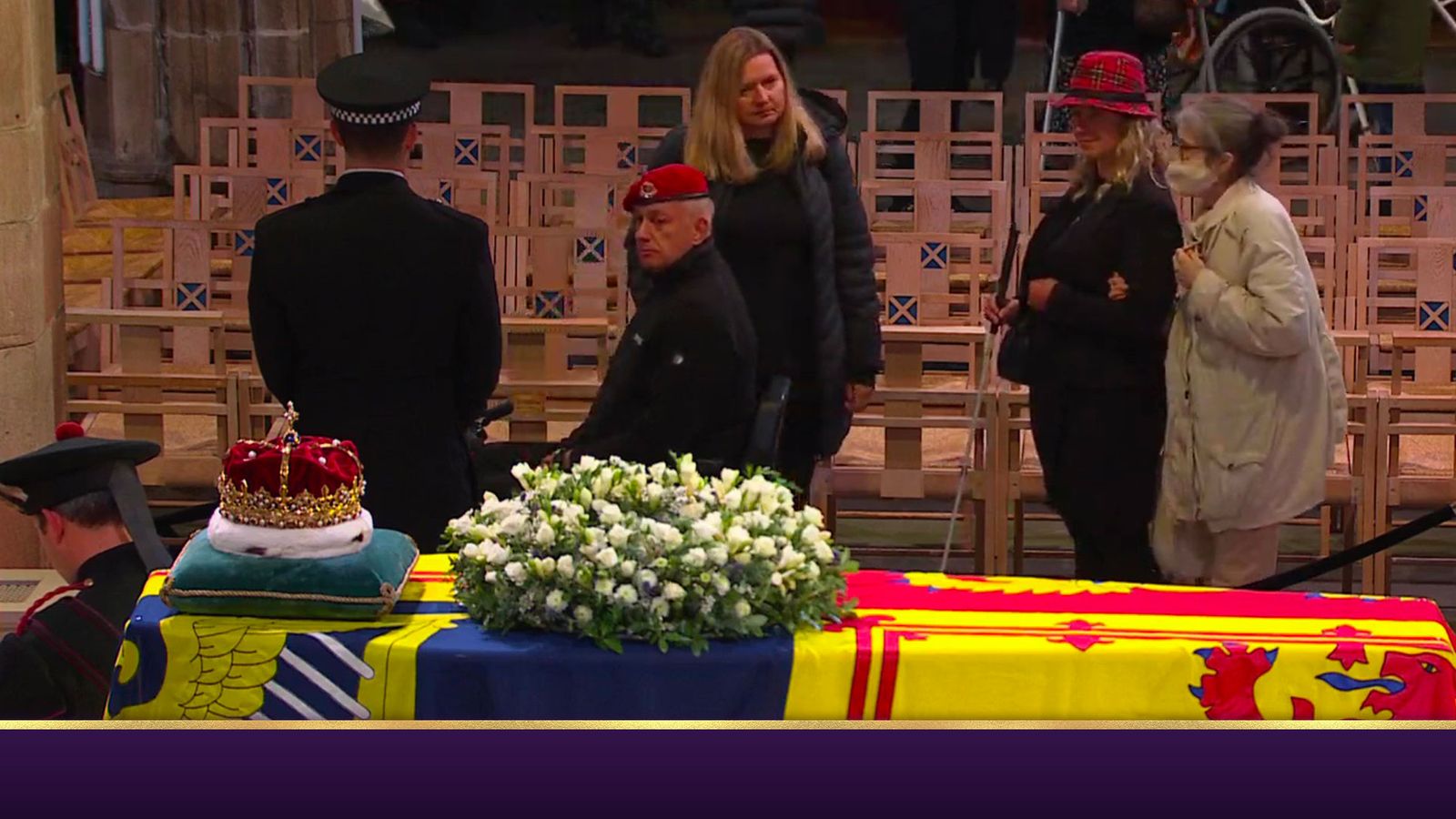 Members of the public are saying goodbye to the Queen in Scotland, before she is moved to London ahead of her funeral.

After lying at rest in St Giles’ Cathedral in Edinburgh for 24 hours, the monarch’s coffin will be flown to London on Tuesday afternoon and taken to Buckingham Palace for the royal household to pay their respects.

King Charles III and the Queen Consort Camilla will join other members of the Royal Family, including the Prince of Wales and his wife, at the palace after visiting Northern Ireland for a reception at Hillsborough Castle.

The King and Queen Consort will also attend a service of reflection at St Anne’s Cathedral in Belfast.

The Queen began her final journey back to England on Sunday with a six-hour drive from Balmoral to Edinburgh.

On Monday, King Charles led his family in a royal procession through the city as the her coffin was moved from the Palace of Holyroodhouse to the cathedral for a service of prayer and reflection.

After the service, members of the public began to enter the building to bid farewell to the Queen – her coffin draped in the Royal Standard of Scotland, with the Crown of Scotland and a wreath of Balmoral flowers placed on top.

And in the evening, the King and his three siblings – Princess Anne, Prince Andrew and Prince Edward – held a vigil by her side as people continued their procession through the cathedral.

The coffin will remain lying at rest until 5pm, when a hearse will transport it to Edinburgh airport, accompanied by the Princess Royal.

After a 55-minute flight, guards of honour will salute the arrival at RAF Northolt, west of London, before the state hearse takes the Queen’s coffin to the palace, where it will be placed in the Bow Room for the family and household to take part in prayers.

Ahead of the gathering, the King and the Queen Consort will fly from Scotland to Northern Ireland and head straight to Hillsborough to view an exhibition on the Queen’s historical ties to the area.

King Charles will then meet Northern Ireland Secretary Chris Heaton-Harris – who was only appointed to the role last week – along with party leaders, including the First Minister-designate, Sinn Fein’s Michelle O’Neill.

He will also receive a message of condolence from the Speaker of the Northern Ireland Assembly and meet faith leaders ahead of the cathedral service, before he and the Queen Consort fly back to London.

A rehearsal for Wednesday’s procession of the monarch’s coffin to Westminster Hall will also take place later, travelling along The Mall before moving down Horse Guards, Whitehall, Parliament Square, and into New Palace Yard.

The Queen will lie in state there for four full days until the morning of her funeral on Monday 19 September, with hundreds of thousands of people expected to visit.

But while the hall will be open to the public 24 hours a day, reports have warned of waits of up to 30 hours to get inside.

Later in the week, the King and his Queen Consort will make one further visit, heading to Wales.