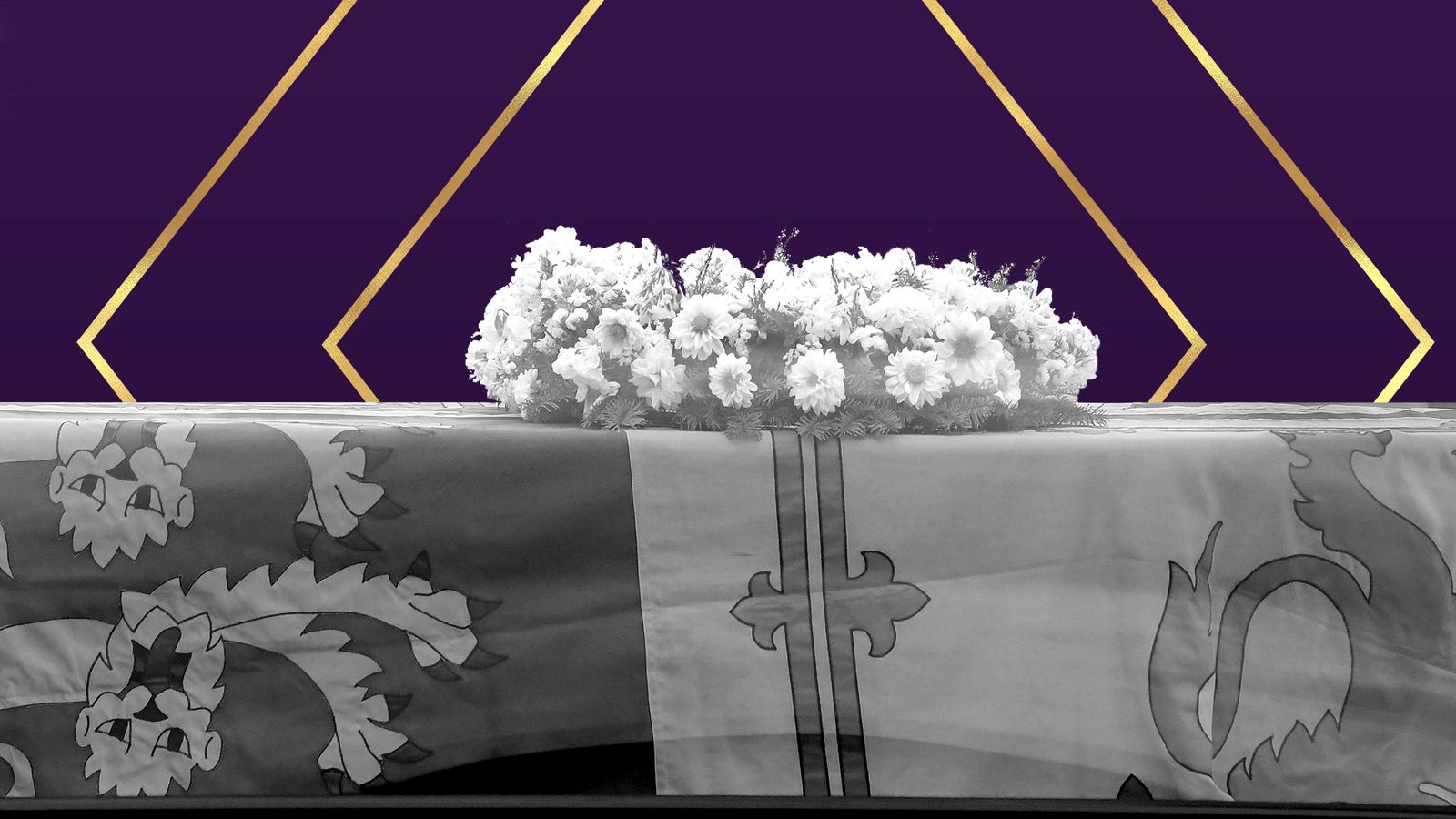 Queen Elizabeth II will be laid to rest today next to her beloved husband following a day full of historic and personal significance.

Tens of thousands of people have travelled to London and Windsor for the state funeral and burial service, which will be watched on television by millions around the world.

There will be continuous coverage from 9am on Sky News, and you can follow all the events on our website and apps.

This is what will happen and when.

The doors of Westminster Abbey will open, and the first guests will begin to take their seats.

A total of 500 foreign dignitaries will be among 2,000 guests including politicians, civil servants, some celebrities and many ‘ordinary’ members of the public selected for charitable or community works.

Many world leaders who met the Queen during her long reign will be among those representing nearly 200 countries and territories.

Shortly after 10.35am, the coffin will be lifted and carried in procession to the state gun carriage of the Royal Navy positioned outside the north door.

10.44am Procession to Westminster Abbey

The procession will involve a total of about 6,000 representatives from all three armed forces, with 98 Royal Navy sailors towing the 123-year-old gun carriage which will carry the Queen’s coffin to Westminster Abbey.

This follows the tradition set at the funeral of Queen Victoria in 1902, when horses panicked and a party of sailors were commandeered to haul the carriage through the streets of Windsor.

Since then, the carriage, originally built in 1899, has been kept in an environmentally secure room at HMS Excellent in Portsmouth – where its custodian, Lieutenant Commander Paul “Ronnie” Barker turns its wheels a quarter-turn each week to ensure they do not become bowed by gravity.

Following the Queen’s coffin will be the King and his siblings, and the Queen’s grandsons.

They will be followed by the Queen’s son-in-law Vice Admiral Sir Tim Laurence, her cousin the Duke of Gloucester, and her nephew the Earl of Snowdon.

10.52am Procession arrives at the Abbey

The procession, led by a massed Pipes & Drums of Scottish and Irish Regiments, the Brigade of Gurkhas, and the Royal Air Force and numbering 200 musicians, will arrive at 10.52am and the coffin will be carried into the Abbey for the service.

The funeral will be conducted by the Dean of Westminster, with Prime Minister Liz Truss and the Secretary General of the Commonwealth to read Lessons.

The Archbishop of York, the Cardinal Archbishop of Westminster, the Moderator of the General Assembly of the Church of Scotland and the Free Churches Moderator will say prayers.

The sermon will be given by the Archbishop of Canterbury, who will also give the commendation. The Dean of Westminster will then pronounce the blessing.

You can see the order of service in full.

Towards the end of the ceremony the Last Post will sound, followed by a two-minute silence to be observed in the Abbey, and throughout the United Kingdom.

The national anthem will be played and there will be a lament at the close of service at around midday.

The coffin will be carried out of the Abbey and returned to the State Gun Carriage for another procession to Wellington Arch.

The King and Members of the Royal Family will again walk behind Her Majesty. The Queen Consort, the Princess of Wales, the Duchess of Sussex and the Countess of Wessex will follow by car.

The procession will include detachments from the Armed Forces of the Commonwealth.

Minute Guns will be fired in Hyde Park by The King’s Troop, Royal Horse Artillery, and Big Ben will toll throughout, with a muffler to calm the tone of the bell.

At Wellington Arch, the coffin will be transferred from the gun carriage to the state hearse to travel to Windsor.

As the procession departs, the parade will give a royal salute and the national anthem will be played. The King and members of the Royal Family will then depart for Windsor.

People are expected to line the route out of Central London along the Great West Road, past Heathrow Airport and through Staines before reaching Windsor.

The State Hearse will approach Shaw Farm Gate on Albert Road, Windsor, and join the Procession which will have been formed and in position.

It will travel up the Long Walk to St George’s Chapel for the committal service.

3.10pm Procession up the Long Walk

There will be a procession led by a dismounted attachment of the Household Cavalry, with pipers and drums and a band from the Coldstream Guards. Members of the Queen’s personal staff will follow.

The route will be lined by the armed forces.

The King and members of the Royal Family will join the procession in the Quadrangle at Windsor Castle.

Minute Guns will be fired on the East Lawn by The King’s Troop, Royal Horse Artillery, as both the Sebastopol Bell – captured in Crimea in 1856 – and the Curfew Tower Bell toll concurrently.

The Procession will halt at the bottom of the West Steps of St George’s Chapel in Horseshoe Cloister, where the bearer party will lift the coffin from the state hearse and carry it in Procession up the West Steps.

A guard of honour from the 1st Battalion Grenadier Guards will be formed, and the Queen’s coffin will carried up the West Steps into the Chapel.

Around 800 people, including members of the Queen’s Household and Windsor estate staff, will attend the committal service.

The Dean of Windsor will lead the service, with prayers said by the rector of Sandringham, the minister of Crathie Kirk and the chaplain of Windsor Great Park.

The choir of St George’s Chapel will sing during the service.

Prior to the final hymn, the Imperial State Crown, the orb and the sceptre will be removed from the Queen’s coffin, and placed on the altar.

At the end of the final hymn, the King will place the Queen’s company camp colour of the Grenadier Guards on the coffin. At the same time, the Lord Chamberlain will “break” his wand of office and place it on the coffin.

The coffin will be lowered into the Royal Vault as the dean of Windsor reads a psalm.

The Queen’s piper will play a lament as he walks away.

The Archbishop of Canterbury will give a blessing, and the national anthem is sung.

The service is expected to end at around 4.30pm.

The burial service will be a deeply personal family occasion and entirely private. It will be conducted by the dean of Windsor.

The earth that will be scattered onto the coffin will have been gathered from the royal mausoleum at Frogmore.

The Queen’s final resting place will be the King George VI memorial chapel, a small annex to the main chapel at Windsor – where her mother and father were buried, and where the ashes of her sister, Princess Margaret, are kept.

When Prince Philip died, he was temporarily laid to rest in the Royal Vault at St George’s, but will now be moved to the memorial chapel to join the Queen, where they will lay in rest together.