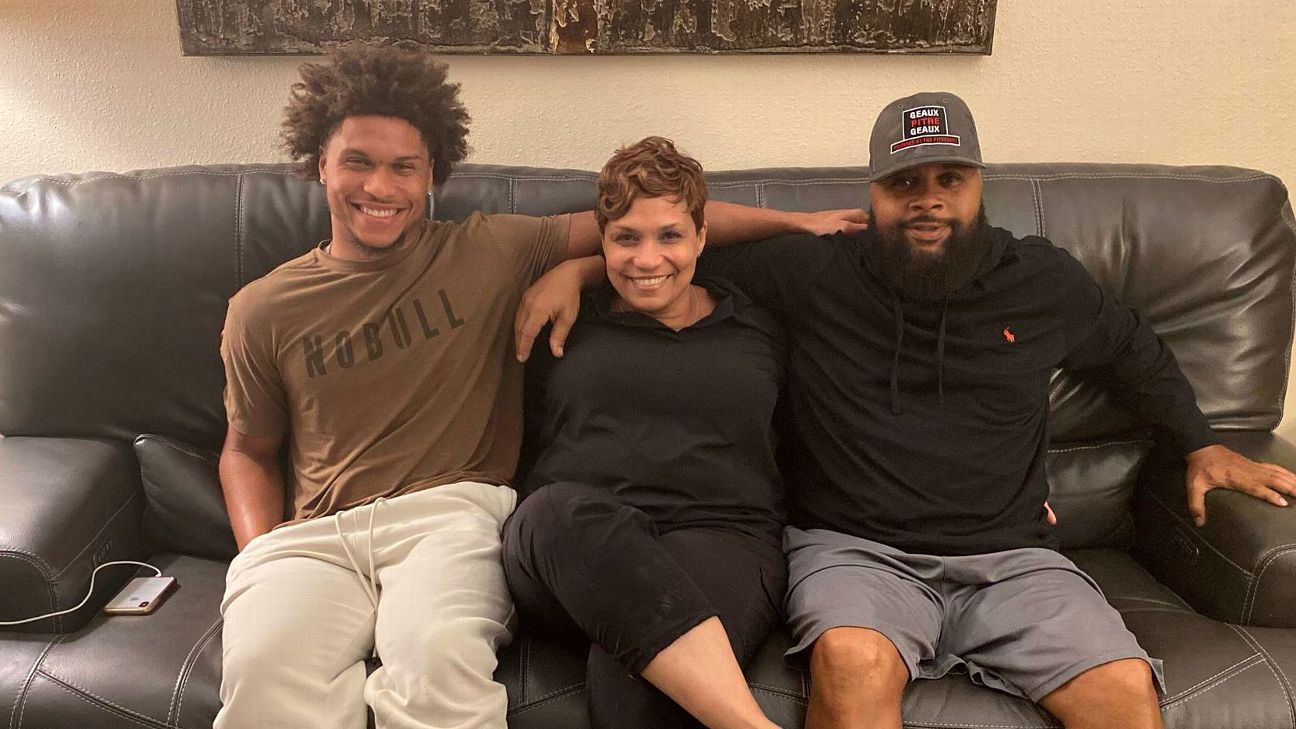 HOUSTON — It was evening time when Houston Texans second-round pick Jalen Pitre was in his childhood bedroom, studying film.

Jalen’s mother, DeVita, was sitting on a black couch in the living room explaining why her multimillion-dollar son had decided to live with his parents after being drafted in April.

The backstory centers around Jalen asking DeVita to search online on his behalf, as he was unfamiliar with home ownership. As she was about to reveal the prices she discovered, Jalen’s dad, Rick, leaned over and playfully interrupted DeVita.

“She’s going around in circles,” Rick said as DeVita giggled. “Aye man! Cut to the chase. Jalen’s cheap! He ain’t finna be flashy. He wants to look nice, don’t get me wrong, but Jalen ain’t finna get off the airplane with no mink coat.”

The Pitres live roughly 20 minutes from NRG Stadium, where the Texans play. It’s the same house where Jalen and his brother, Jerick, have grown up since 2000.

So even after the 23 year-old signed a four-year, $8.9 million deal, with a $3.6 million signing bonus, Jalen knew he was “staying at the crib.”

The prices DeVita discovered for the type of home Jalen was interested in were around $10,000 per month, which made staying with his parents financially beneficial.

“He was like, ‘Oh no, I’m not finna give them people that kind of money,’” DeVita said. 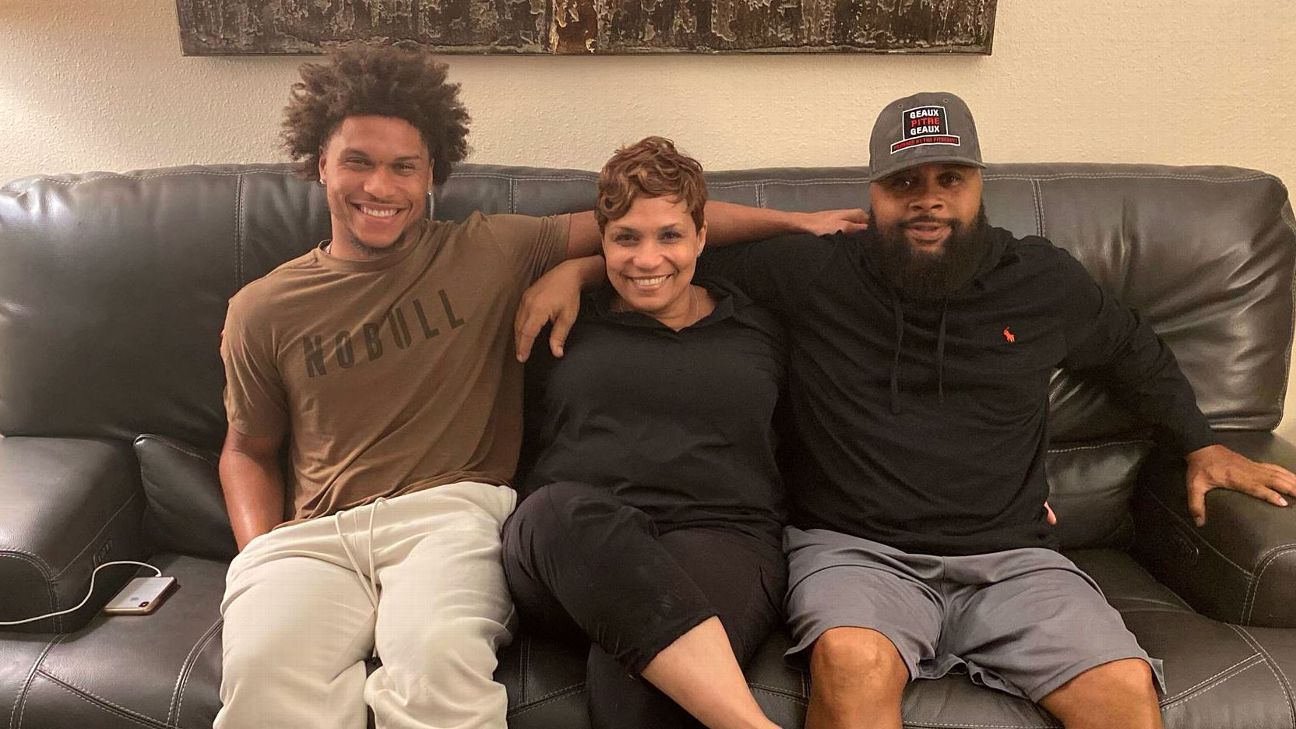 Shortly after, Jalen strolled into the family room after he finished studying and confirmed the rumors.

“Yeah, that’s pretty accurate,” Jalen said with a smile. “I’ll spend my money. But for the most part, I try to be a little responsible. So, yes, I would say I’m a little cheap. My parents always told me that their doors are always open and to take my time before choosing somewhere.”

Jalen doesn’t plan on moving until he finds a home that makes financial sense for him. But in the meantime, he enjoys being able to spend time with his parents in the living room, where they used to watch throwback movies such as “Bad Boys” or their favorite sitcom, “Martin.”

That living room is where Jalen, Rick and Jerick, who’s 15 months older than Jalen, would watch sports together. Jalen wasn’t a diehard fan of any team growing up, but he developed favorite players like the late Kobe Bryant and Reggie Bush, who caught his youthful eye when Bush won the Heisman at USC. Bush is also why Jalen wears No. 5.

But even though they lived in Houston, the household wasn’t mad when the Texans passed on Bush to select defensive end Mario Williams No. 1 overall during the 2006 draft. Rick was a New Orleans Saints fan at the time, so it was a win-win situation when the Saints took Bush with the No. 2 pick.

But Jalen still grew an affection for a specific player from the hometown team. When Jalen was a running back in his younger days, he modeled his game after Bush and Arian Foster.

But Jalen was candid about his running back skills.

“At one point, my favorite player was Arian Foster,” Jalen said of the Texans’ all-time leading rusher. “But to be honest, I really wasn’t that good at running back. Like, I was good, but it wouldn’t have gone too far. I probably wouldn’t have been able to be a NFL running back. Not a chance.”

Instead, Jalen earned his way to a starting safety position with the Texans, and the 2021 Big 12 Defensive Player of the Year at Baylor finished with 15 tackles through his first two games against the Indianapolis Colts and Denver Broncos.

But it’s not every day that you hear about an NFL player living in his childhood home. And even though there has been renovation over the years, the look around the house and how his parents treat Jalen are the same.

There’s no curfew for Jalen, and he admitted that there isn’t “even a reason to because I’m usually in the house, asleep really early.”

The room that Jalen now sleeps in has become a little cramped with his Baylor football gear, but not much has changed for him.

The layout of the room remains the same, and when he goes through his morning routine, it’s pretty similar to when he attended Stafford High School.

He wakes up at 5 a.m. for practice, gets dressed and hops on the interstate for a 20-minute ride to the facility in the same car that he received from his parents in his sophomore year of college.

Because of his early mornings, however, Jalen rarely sees his parents before he makes that ride, as things remain similar for them as well. DeVita has been a bank teller for 21 years, and Rick has worked for UPS as a truck driver for 28.

When Jalen arrives home from practice in the evening, he usually only sees his mom. They’ll chat as he’ll listen to his mother talk about work and poke fun at her for complaining.

But two childhood mainstays have altered.

One, they rarely talk about football.

“We don’t like stressing him out,” Rick said. “The NFL is just so much.”

The lack of football discussions at home helps Jalen deal with the daily rigors of the NFL.

“It calms my nerves a lot,” Jalen said. “I just come home and chill like it’s high school, it’s no pressure. Not many questions about football stuff.

“[It] reminds you of little league when you were in school ball, playing high school or middle school, it just gets a very old-school feel to it. It makes you feel like a real kid again, and it’s real fun.”

The other change revolves around food.

They still have dinner together, but Jalen eats what he brings home from the facility. As much as he loves his mom’s cooking, especially his favorite dish of oxtail, he knows he has to eat like a professional athlete.

“My mom and my dad are great cooks, and they’ll throw down if we request it,” Jalen said. “But I tried to keep that burden off of them. And I’m also trying to be a little bit healthier.”

Jalen’s diet consists of no fast food, cleaner types of protein such as fish and chicken and significantly more green vegetables and fruits.

Rick usually arrives home around Jalen’s bedtime (9 p.m.), but sometimes the family will sit in the living room, chat about life and reminisce.

And when it comes to reminiscing, it’s impossible for Jalen to not rekindle nostalgic thoughts whenever he returns home from practice. When he enters the house from the garage, the sports memories figuratively smack him in the face.

There are numerous trophies from Jalen and Jerick’s younger days.

There are also pictures on the shelf from when Rick coached his sons’ AAU basketball team, called “In Ya Face,” in the sixth and seventh grades.

Two large banners hang from the ceiling of the garage: One of Jalen and another of Jerick in their high school football jerseys from 2016 when both starred at Stafford.

Even though Jalen’s parents crack jokes about his perceived cheapness, they don’t allow Jalen to pay rent, or any other bills.

“I alleviated all of that,” Rick said. “All I asked my kids was one thing: Do your part and we will do ours.”

Jalen living with his parents goes beyond him being frugal; it’s about a family bond that brings him peace from the daily grind of the NFL.

But maybe next offseason, Jalen and his mom will start searching the web again for his first home.

How the Kraken kept their new mascot Buoy a secret
Florida hedge fund could reap around $200 million from big arbitrage bet on Twitter
Which young NBA players are on the rise? 10 breakout candidates for 2022-23
Energy giants return to fossil fuels like coal as Europe braces for winter
Truss sticks by plan but admits mistakes, and says top-rate tax cut was chancellor’s idea