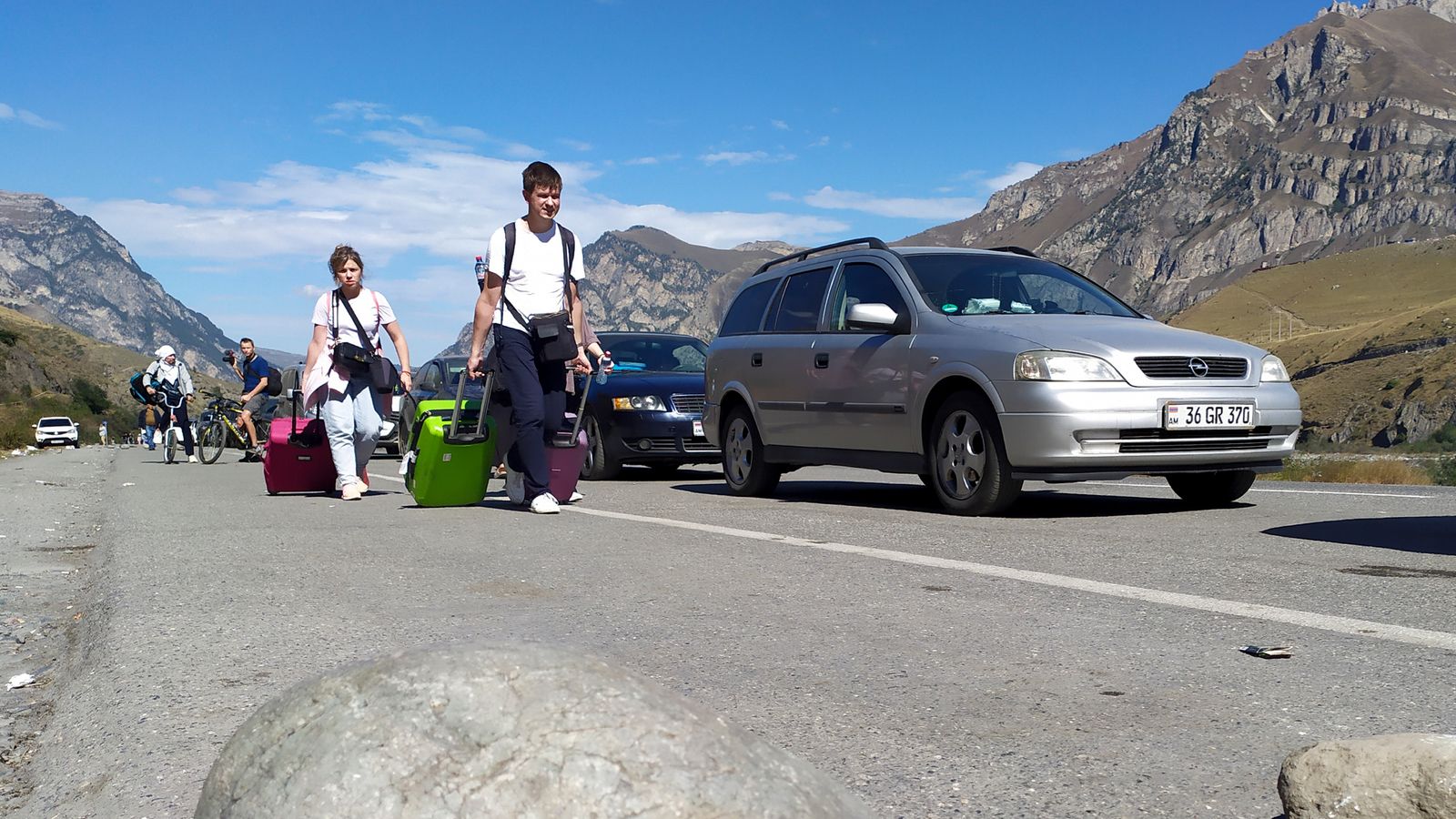 Vladimir Putin has for seven months insisted his invasion of Ukraine was only a special military operation.

That way he hoped the conflict would seem distant and contained to the broad Russian public.

With his military suffering setback after setback, a week ago he announced the mobilisation of hundreds of thousands of reservists. But even that was qualified.

It was a partial mobilisation and so far the bulk of men being drafted are said to be from areas far from Moscow and in the Russian federation’s autonomous republics.

He will have hoped again that the bulk of ethnic Russians will still not feel directly affected by this latest escalation.

But it is not working out that way, it seems, not for hundreds of thousands of Russians across the country.

They’ve felt so strongly about his latest moves that they have left their homes and everything in them and made the long and difficult journey out of Russia. To Georgia, or to Mongolia and Kazakhstan or Finland, where so many Russians have crossed that the authorities have now closed the border to them.

As many have left in the past week as in the entire conflict. One young mother crossing into Georgia told Sky News that you cannot raise children in a country that sends men to kill against their will.

Others are less prepared to talk to news crews when they cross. Many of them are from those autonomous republics.

Areas such as Dagestan, in the north Caucasus, Buryat far to the east and Chechnya have suffered a disproportionately high amount of casualties in the Ukraine war and suspect the new mobilisation will mean an unfair number of their men are forced to join up.

There has been an unprecedented level of unrest in these republics in the last week. We have seen startling videos online of men headbutting policemen and kickboxing them in mass brawls.

And in deeply conservative Islamic areas of Russia, women have been so angry they have taken to the streets to chant “No more war” against police.

We were able to talk to a few men anonymously who come from these areas.

One from Dagestan would not show his face on camera, but said the situation there was getting worse. Young men, he said, were being forced into minibuses and sent for military training. He was getting out of Russia while he could.

Another man from Chechnya said zthat since Mr Putin’s mobilisation order “the mood of younger Chechens worsened. Everybody is trying as fast they can to leave Chechen territory, fearing they’ll be mobilised.”

He questioned the Kremlin’s logic in forcing men to fight against their will.

“I don’t think they’ll try hard because many of us think this isn’t our war and that Russia is an aggressor. This is not defending the interests of their motherland.”

He had been working hard to get Chechen men across the border.

We filmed our interview at night and obscured his identity to avoid retribution by Chechen authorities back home against members of his family. Chechnya has been subject to brutal repression since its subjugation by Russia in two conflicts.

He said Russia was fighting a war and there was no other way of describing it.

So did another man who approached us under cover of darkness. A military veteran, he had fought for Russia and served four years, he said, but had just crossed the border to avoid being called up.

“I really don’t understand why I should go,” he told us. “This is not our territory. The fact they’re trying to mobilise this many people means it’s the start of something very serious.”

He had comrades who had fought in Ukraine, he said, but their experience was far from encouraging.

“I have some friends who are in Ukraine and friends who have come back. But they’re not saying anything good about it.”

Mr Putin is doubling down on his war, but for an increasing number of Russians that has brought the conflict far closer to home.

It is provoking widespread unrest and a mass exodus. He is gambling that those downsides will be worth it, but he may be raising a fighting force of only dubious quality, hastily trained poorly equipped and reluctant to fight.