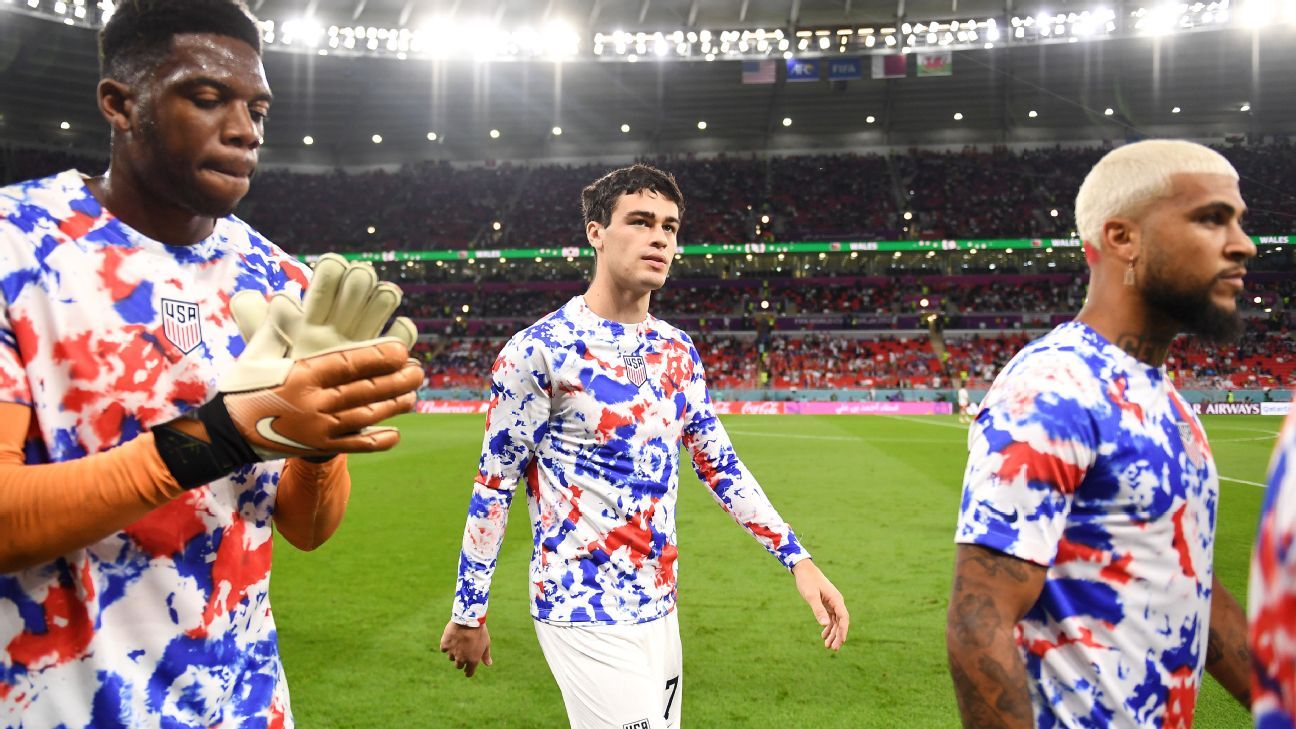 AL RAYYAN, Qatar — United States attacker Giovanni Reyna said he is “100 percent” healthy despite being an unused substitute in the team’s 1-1 draw with Wales to open the World Cup.

Reyna, who has battled injuries for most of the past year, featured in Borussia Dortmund‘s final three games before the World Cup break and figured to be a major contributor for the US at the tournament.

– Carlisle: On brink of massive win, US can’t close out Wales
– Borden: Who feeds the USMNT? The cook behind the squad
– World Cup 2022: Brackets, fixtures, results, standings

“I feel really good. I feel great,” Reyna said. “I feel fine. [Coach Gregg Berhalter] doesn’t have to tell me why he didn’t put me in or why he does.”

Berhalter used his first four substitutes to insert midfielder Brenden Aaronson, striker Haji Wright, right-back DeAndre Yedlin and midfielder Kellyn Acosta all with the US leading 1-0. He appeared to be ready to sub in center-back Aaron Long before Wales equalized through a Gareth Bale penalty in the 82nd minute.

Despite Reyna’s claims of full health, Berhalter, who brought on Jordan Morris for Timothy Weah in the 88th minute, said he was taking a cautious approach.

“It was trying to get him up to speed. I think there was a little bit of tightness that we were guarding him against in Al-Gharafa in the training exercise as a precaution.” Berhalter said. “But we’ve been building him up and think he can play a big role in this tournament. The question is when. Hopefully Friday, he’ll be another step ahead.”

The US has three days off before it takes on group-leader England on Friday after the Three Lions opened their tournament earlier Monday with an emphatic 6-2 win against Iran to take control of Group B.

US captain Tyler Adams also said Reyna was ready to play against Wales and was optimistic he could make an impact against England.

“We know the impact he can make when he comes into games and when he has the opportunity,” Adams said. “So, when he gets his chance, he’ll take it.”

Several players on the US expressed disappointment about leaving with the draw after leading for most of the game but were generally pleased with the overall performance.

“Things change really quickly in football,” Adams said. “Obviously, you have to change gears, recover as quickly as possible for a big next game. We know how much quality England’s going to have. But again, we think that we match up well against them.

“We have an athletic team. We think that against the ball we’re really dominant at times. You saw that tonight with our counter-pressing and how we’re able to create a lot of transition moments.”

Asked whether his team would have time to recover ahead of the match with England, Berhalter said playing one of the tournament favorites was the only motivation the US would need.

“You’re getting to play England, that’s the recovery right there, you get to play one of the teams that we think is a favorite of the tournament,” Berhalter said. “Road ahead is next game. It’s a pretty short road.”