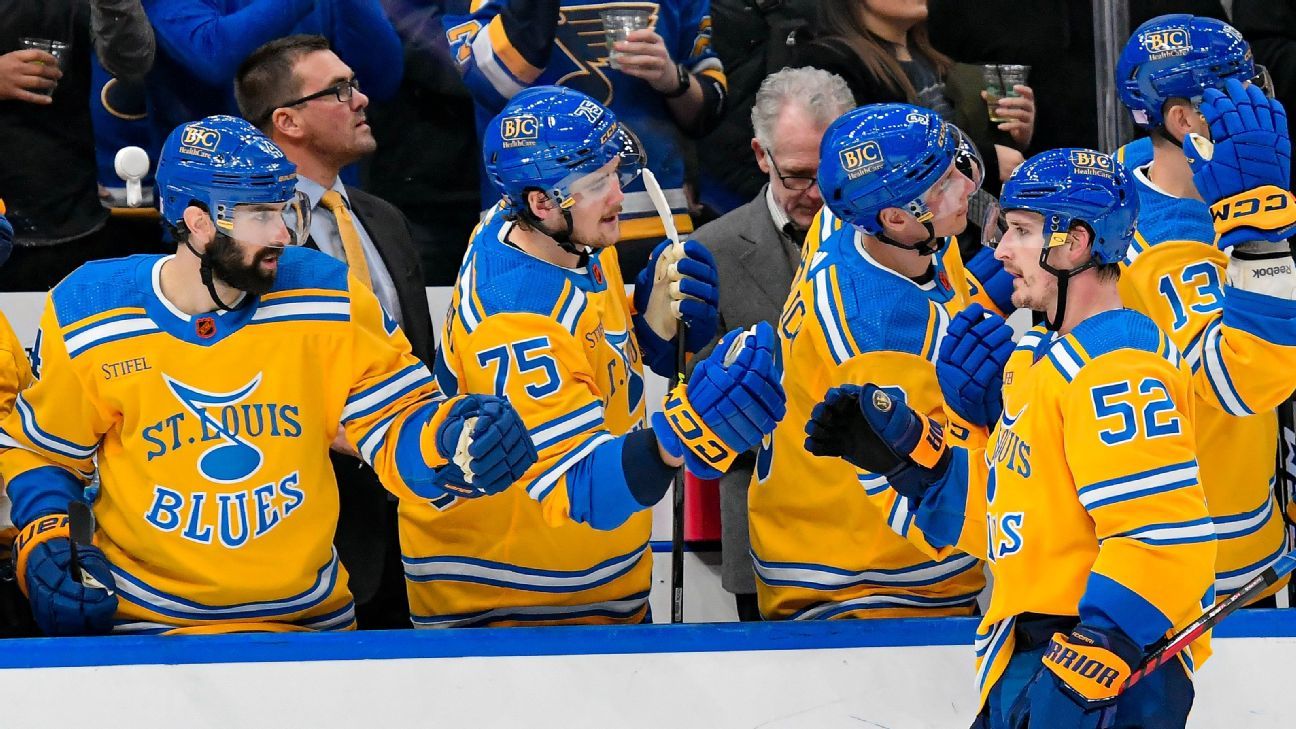 Doug Armstrong is in his 12th year running the St. Louis Blues, making him the second-longest-tenured general manager in the NHL. While he’s not sure what to make of his team this season, he knows one thing.

“I’ve never been part of a group that’s had such a diversity in play and results,” Armstrong told ESPN over the weekend. “Our peaks are high and our valleys are low. And we get to both quickly.”

The Blues have had a dramatic start to the season. A franchise-record eight-game losing streak was followed by a seven-game winning streak.

Along the way, the Blues demonstrated some bad habits, like allowing a one-goal deficit to quickly become two or three. They’ve also engineered incredible comebacks, like Saturday; down 4-1 entering the third period, St. Louis stunned Florida with an overtime win.

“I know what our identity has been in the past and I don’t think this team has an identity yet,” Armstrong said. “That’s one of the struggles our coaches are having right now. You’re a quarter into the season and you still haven’t found anything you can hang your hat on and say, ‘This is what a good game looks like.'”

With an average age of over 28, the Blues have the eighth-oldest roster in the NHL. And they’ll face big decisions soon: The two highest-paid players (captain Ryan O’Reilly and winger Vladimir Tarasenko, with matching $7.5 million cap hits) both become unrestricted free agents this summer.

But for now, Armstrong is exercising patience — despite his team hovering around .500 in a competitive Central Division. With tenure comes perspective, and Armstrong knows how to weather a storm. In a wide-ranging conversation, the Blues GM explained why seismic moves this season are unlikely — and a rebuild isn’t in the team’s plans anytime soon.

The quarter mark is too early to panic

Rewind to the Blues’ 2019 Stanley Cup season. In January, the Blues had the worst record in the league and had already undergone a coaching change, replacing Mike Yeo with Craig Berube. The team had made several big free agent acquisitions the previous summer: O’Reilly, Tyler Bozak, Pat Maroon, David Perron.

“A lot of pundits thought we were a solid team, a Cup-contending team, but we weren’t playing like it,” Armstrong said. “We wanted to be careful not to throw the baby out with the bathwater. Good players have bad years. I learned that early in my career from Bob Gainey. If a player is going to have a 12- or 16-year career, they’re not all going to be memorable. You don’t want to make a mistake out of frustration.”

On a Western Conference road trip just before Christmas, a shift began. “We didn’t win the games, but we started to play really well,” Armstrong recalled. “It didn’t look like we had turned the corner, but inside it felt like we were turning the corner. In January, Jordan Binnington came in and a storybook season was had after that.”

Most of the noise is just that — just noise

Every player on the Blues has seemingly seen their name come up in trade rumors, including the captain, O’Reilly. Armstrong laughs and says he has learned to live with the white noise.

“People just make up things that they think would work because they want to play GM,” Armstrong said. “I’m not sure how many trades that get made up actually come to fruition. You know the people have a job to do — whether it’s every day on TV or radio or on Saturday nights. That’s just where we’re at as a society, and we as managers, players and owners have to understand it.”

When asked specifically about O’Reilly, Armstrong said: “At the end of the day, he’s a good player and he’s been a good player for a long time for us. If I say we want to get better in incremental ways over the next month or two, he has to be a big part of that.”

“I don’t even know the last time there was a shake-up trade,” Armstrong said. “Not in season. And in the offseason — to me, those are contract-forced trades or shifting-direction trades. Not ‘I want to get people’s attention’ trades.”

Since the Blues won the Cup four years ago, roughly two-thirds of the general managers in the league are new at their posts. Unfamiliarity makes it less likely to commit to a franchise-altering trades, Armstrong said. There’s also an aspect of risk aversion.

“I think it’s easy for managers, myself included, to say, ‘Well the salary cap makes it hard to trade,'” Armstrong said. “I actually just don’t think there’s an appetite to make those trades like there were in the past. It’s become a seasonal industry where you make your trade at the trade deadline and at the draft. You’re always talking to teams, but it seems like it’s more talk and less action.”

This season will include 103 exclusive regular-season games across ESPN, ESPN+, Hulu and ABC. More than 1,000 out-of-market games will be available to ESPN+ subscribers via NHL Power Play on ESPN+.
• How to watch
• Subscribe to ESPN+
• Stream the NHL on ESPN

“We all have a different definition of what a retool, rebuild or re-whatever means, but it really just means you’re taking a step back,” Armstrong said. “To me, taking a step back to take two forward, I have a vision for how that would look. But taking eight steps back and trying to pick in the top five for the better part of five or six years, those things sound great in July but they’re not a lot of fun in January. And if you do that year in and year out, it takes a special market to be able to sustain a revenue and keep fans wanting to come out and see that team. Look at teams that have done it — their attendance has dropped significantly. When they come back, they’ll probably have great attendance again, but it’s still a business at the end of the day and we still have to put a product on the ice that can sell tickets.”

Armstrong is proud of the team he built and wants to see his vision through. And there’s one specific reason why he thinks the Blues can stave off a rebuild: drafting Jordan Kyrou in the second round (2016) and Robert Thomas at No. 20 of the first round (2017).

“Those are both point-per-game players. If you redrafted those guys, they’re probably both in the top 10,” Armstrong said. “So in my mind, we went through a rebuild without having to do it because our amateur scouting staff did a good job of getting us competitive players. If we had picked normal players that go in that area, instead of point-per-game players, you’ve got players that you’re trying to get into the league.”

Kyrou is 24. Thomas is 23. They are both signed to extensions with a $8.125 million cap hit that kicks in next season.

“Because we have these building blocks moving forward, we can keep our veterans together and push with the top teams,” Armstrong said. “So I don’t think a rebuild for us is going to look like it has for other teams. If you look just at those two players, they’re too good to let us go to last place consistently.”

Parity reigns now more than ever

The style of play has also changed, leading to even more unpredictability. “Now no lead is safe because defending has taken a secondary thought process for most teams,” he said. “They play offense — and offense is great when you score, but it creates offense for the other team when you don’t. It’s an entertaining style of hockey, but it creates such a variance day to day and team to team.”

And that also has created crowded standings.

“Boston and New Jersey are the outliers at the top,” Armstrong said. “Other than that, you have five or six over [.500], and four or five under [.500] for 26 teams. Having new teams sprout up is good because we’re in an entertainment business. And that’s the beauty of the cap system. Every organization, every owner, every fan base believes that they should be competitive. But the reality is that half the teams aren’t going to make the playoffs, and three-fourths of the teams will be done within two weeks of the playoffs.”

The Blues are committed to consistency behind the bench

Craig Berube was signed to a three-year extension in February 2022. That belief hasn’t wavered. After the Blues lost five in a row earlier in the month, Armstrong decided to handle media availability himself — and give the players and coaches the day off. And during that session, the GM reaffirmed his coaches’ security.

“At that time we weren’t playing well, and usually calling for a coaching change is the lowest hanging fruit,” Armstrong said. “None of us are immune. Craig took this job, I took this job, and every day we wake up, we’re one day closer to getting fired. That’s just the nature of the beast of our profession, and we accept that. But that’s not something we would take lightly.

“I thought it was beneficial for myself to get that out there because we had lost five. If we lost another game or two, I knew that would be the narrative. I figured if we squashed the narrative before it started, we didn’t have to deal with it. But also … Craig is a good coach. Like O’Reilly, it’s incumbent on him to get us out of this too.”