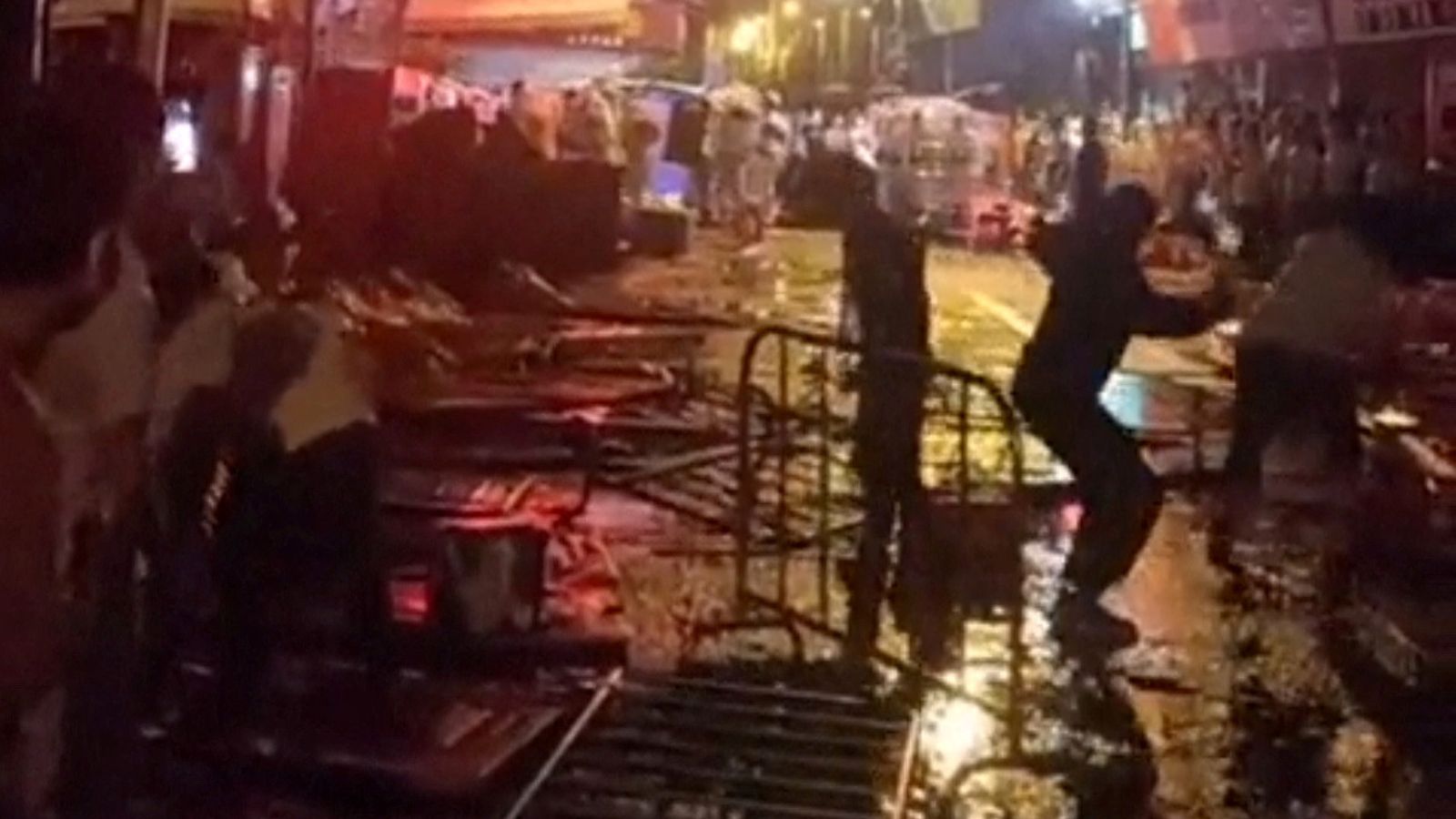 Crowds in a major Chinese city have clashed with white hazmat-suited riot police, footage on social media shows, as the biggest anti-government protests in decades continue over stringent zero-COVID policies.

The clashes took place in Guangzhou on Tuesday night, according to posts online.

In one video posted on Twitter, objects can be seen flying at dozens of riot police in all-white pandemic gear, holding shields over their heads, as they advance in formation over what appears to be torn-down lockdown barriers.

Police are later seen escorting a group of people in handcuffs to an unknown location.

Another clip shows people throwing objects at the police, while a third shows a tear gas canister landing in the middle of a small crowd on a narrow street, with people running to escape the fumes.

Reuters news agency verified the videos were filmed in Guangzhou’s Haizhu district, the scene of violent COVID-related unrest two weeks ago, but it is unclear when the clips were recorded.

The protests follow a wave of demonstrations in the commercial hub of Shanghai, the capital Beijing and other cities over the weekend.

In rare scenes of open dissent in China, protests have flared across the country in response to COVID lockdowns and restrictions.

Daily coronavirus infections have hit record highs in recent weeks, but the country’s caseload has remained small by global standards.

Some believe the strict restrictions are holding back the economy and are increasingly out of sync with the rest of the world.

Millions of residents have been confined to their homes, subject to mass testing programmes and enduring sudden lockdowns in areas where positive coronavirus cases or their close contacts have been detected.

Read more:
On Chinese social media, America is being blamed for the protests
Why are people protesting in China?
Your questions on the protests in China answered

Guangzhou, home to many migrant factory workers, is a sprawling port city north of Hong Kong in Guangdong province, where officials announced late last night they would allow close contacts of COVID cases to quarantine at home instead of being forced to go to shelters.

In the central city of Zhengzhou, where there have been clashes at a huge Foxconn factory making iPhones, and an exodus of workers from the site frustrated by COVID curbs, officials announced the “orderly” resumption of businesses, including supermarkets, gyms and restaurants.

However, they also published a long list of buildings that would remain under lockdown.

The country’s top security body called for a crackdown on “hostile forces” in a statement that did not refer to the protests.

The Central Political and Legal Affairs Commission also said “illegal and criminal acts that disrupt social order” would not be tolerated.

National health officials said on Tuesday that China would respond to “urgent concerns” raised by the public and that COVID rules should be implemented more flexibly, according to the severity of outbreaks in each region.

Although the easing of some measures appears to be an attempt to appease the public, the authorities have also started to seek out protesters.

“Police came to my front door to ask me about it all and get me to complete a written record,” a Beijing resident, who did not want to be identified, told Reuters on Wednesday.

Another said some friends who posted videos of protests on social media were taken to a police station and asked to sign a pledge they “would not do that again”.

‘We will fight’: A David and Goliath battle is taking place in Bakhmut
Quick Charge Podcast: January 23, 2023
Former CIA director: US is sending ‘unhelpful message’ to allies
Ukraine War: What can we expect from spring offensive?
‘We called each other Sissie’: Sarah, Duchess of York and Axl Rose pay tribute to Lisa Marie Presley