People in China’s capital Beijing have been allowed to enter parks, supermarkets and offices without showing proof of a negative COVID-19 test in a relaxation of some of the world’s toughest measures against the virus.

“Beijing readies itself for life again,” a headline in the government-owned China Daily newspaper read.

People no longer need a negative COVID test to ride the subway or enter either of the city’s airports. However there was no suggestion of changes to rules requiring passengers to show negative tests prior to boarding.

The Chinese yuan has risen around 5% against the dollar since early November amid expectations of an eventual reopening of China’s economy.

But a response to the changes has been slow to materialise on the ground, with commuter traffic in major cities such as Beijing and Chongqing remaining at fractions of normal levels.

Some remain cautious about catching the virus, particularly the elderly, and there is concern about the impact easing restrictions could have on China’s fragile health system.

China has reported 5,235 COVID-related deaths as of yesterday, but some experts warn the toll could rise above one million if it relaxes measures too quickly. 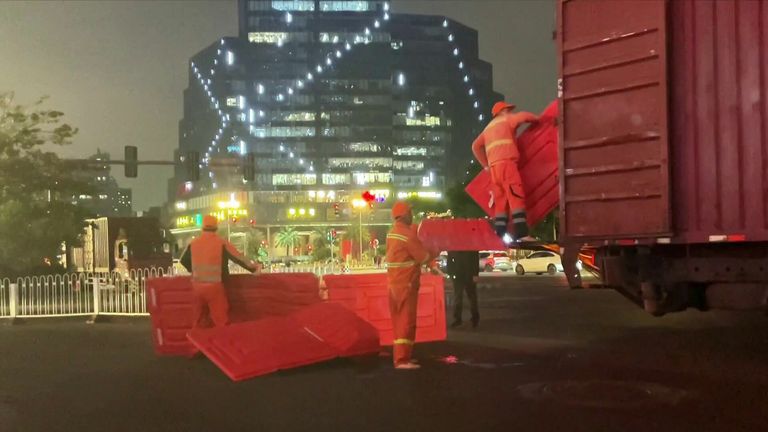 Is China’s stance on COVID changing?

China moving towards living with virus

Officials have been playing down the dangers the virus poses, bringing China in closer alignment with what other countries have been saying for more than a year as they opted to live with the virus and drop restrictions.

The director of the Beijing Institute of Respiratory Diseases, Tong Zhaohui, said the latest Omicron variant had caused fewer cases of severe disease than the 2009 global influenza outbreak, according to Chinese state television.

Reuters reported that China’s management of the virus could be downgraded as soon as January to the less strict category B, from the current top-level Category A of infectious disease.

‘The most difficult period has passed’

“The most difficult period has passed,” the official Xinhua news agency said in a commentary, citing the weakening pathogenicity of the virus and efforts to vaccinate 90% of the population.

“The general direction for the return to normal life is already very clear, and it is essential to restore the free movement of people across provinces to restore the economy,” the former editor-in-chief of the state-run tabloid Global Times wrote in a blog post.

S Club 7 singer reveals she was homeless over Christmas
Breaking down the NBA’s historic surge of 50-point performances this season
British Army has ‘fallen behind’ and ‘needs investment’ – defence secretary
Serrano-Cruz: Two unlikely paths merge for a chance to make history
Way-too-early tennis rankings and predictions for the rest of 2023