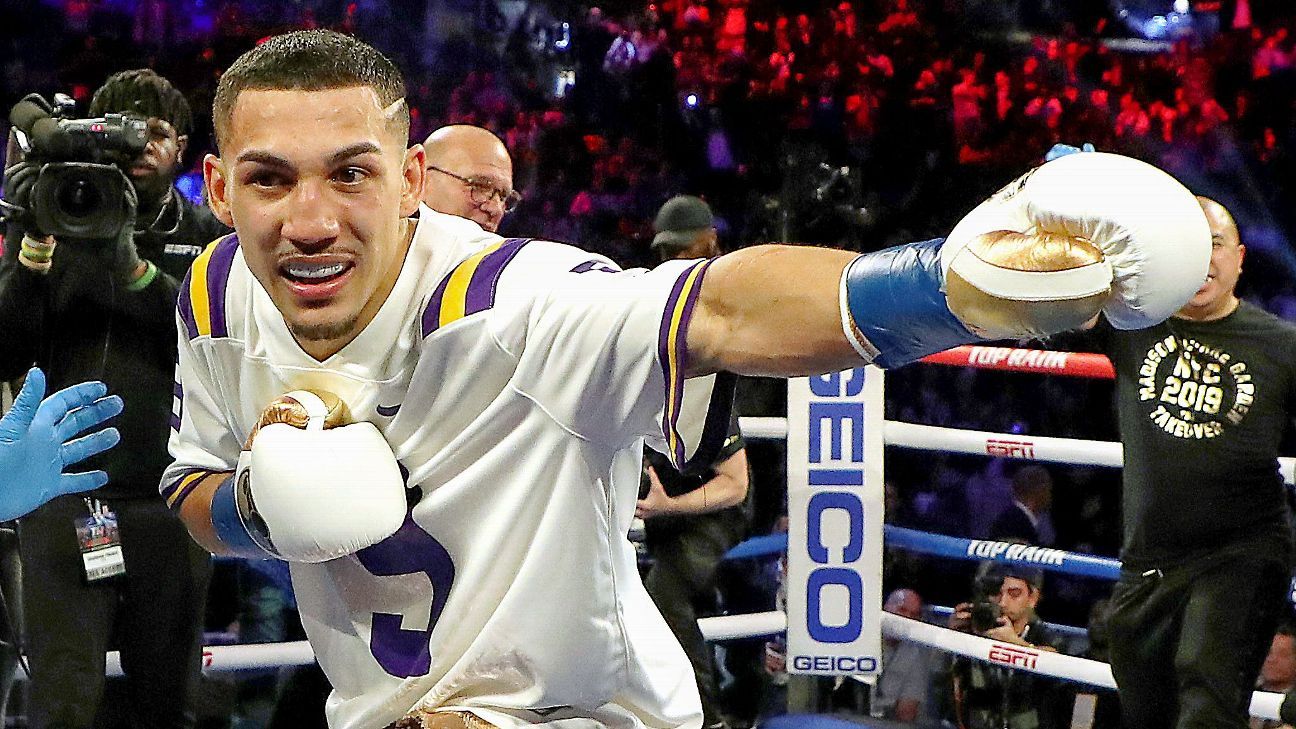 Teofimo Lopez was at the pinnacle of boxing after beating Vasiliy Lomachenko in 2020. A new contract, celebrity, sponsors and fandom followed the undisputed lightweight champion. Just months after his 23rd birthday, Lopez was poised to be the next superstar in a sport with a long history of them.

Lopez planned to push past long-odds underdog George Kambosos, then chase Josh Taylor’s undisputed championship at 140 pounds. But before Lopez could get to that pursuit of Taylor, disaster struck.

Lopez’s first defense was postponed several times, and when he finally met Kambosos in November 2021 in New York, Lopez was woefully unprepared. Turmoil swirled in his personal life, and it carried over into the ring.

He was floored in the opening round of a brutal fight, and though he rallied to score a 10th-round knockdown, he lost his four titles via split decision. He also lost his place as one of boxing’s elite fighters.

Top Rank Boxing is now on ESPN and ESPN+. Subscribe to ESPN+ to get exclusive boxing events, weigh-ins and more.

Now, Lopez is attempting to reclaim that status — and more — at a new weight. Following a confidence-building seventh-round TKO win over Pedro Campa in August, Lopez steps up to fight Sandor Martin on Saturday at New York’s Madison Square Garden (9 p.m. ET, ESPN/ESPN+). The Spaniard is a legitimate 140-pound contender (following his upset win over Mikey Garcia last year), who should serve as a litmus test for Lopez and show just where he’s at — mentally and physically — after a tumultuous 2021.

“This is the greatest time of my life right now,” Lopez, 25, told ESPN on Tuesday. “I think everyone needs to know, I’m where I specifically really need to be right now. I just can’t wait to give everyone a great, tremendous show like I always do. I’m a performer.”

Immediately following the first loss of his professional career, Lopez (17-1, 13 KOs) was rushed to the hospital. He was diagnosed with pneumomediastinum, ESPN’s Mark Kriegel reported, describing the illness as “a balloon-like intrusion of air in his thoracic cavity, the likely result of a tiny tear in his esophagus that developed as he rehydrated after the weigh-in.”

“How he breathed, I can’t even explain,” one specialist who examined Lopez told Kriegel. “Like his neck and chest were in a vise.”

Lopez eventually recovered and decided he could no longer put his body through the process of cutting down to 135 pounds. But he needed to do more than repair his body — his mind was also waging a war.

All fighters exude bravado, but few more than Lopez. A defeat to a 10-1 underdog after all the proclamations Lopez had made surely stung and chewed at his confidence. That it came in his first fight after a career-defining win over Lomachenko must have made it that much worse.

Lopez didn’t fight again until August, and when he did return, it was against a soft opponent selected to make him look good and restore some of that self-belief that had carried him to the top.

Lopez didn’t blow past Campa the way many expected him to do, but he did score the stoppage in his maiden voyage at 140 pounds. Four months later, he’ll fight at 140 pounds for the second time, and it comes against a far better opponent.

Martin isn’t regarded as elite, but his confidence must be at an all-time high. After all, the 29-year-old had never fought outside of Spain until he was picked as a victim for former four-division champion Garcia in October 2021.

In an upset on the same scale as Kambosos’ win over Lopez, Martin scored a majority-decision victory that sent Garcia into retirement. Garcia clearly wasn’t at his best, but that doesn’t matter. Martin took advantage, using his sharp southpaw jab along with disciplined boxing from the outside.

Now, Martin (40-2, 13 KOs) has an even bigger opportunity, one that didn’t come along until five weeks before the fight. Lopez was set to fight former 130-pound titleholder Jose Pedraza, but when Pedraza fell ill, Martin received the call.

“It worked for our best interest because this was the guy originally who we wanted to face coming towards the end of the year,” said Lopez, who fights out of Las Vegas. “This is a good test physically and mentally. … I know this guy is coming here to take everything that we’ve worked so hard for.”

Before he was a champion, Lopez skyrocketed to prominence with a string of highlight-reel knockouts. Lopez didn’t just finish his fights in devastating fashion, he did so with explosive speed and punctuated the KOs with a celebratory dance while his foe lay stretched out on the canvas.

One by one, they all fell. But it was on Heisman night in 2018 that Lopez truly left his mark. Immediately following ESPN’s presentation of college football’s greatest honor, Lopez took center stage at Hulu Theater inside Madison Square Garden and unleashed a single right hand that face-planted Mason Menard into the mat.

Lopez performed a backflip, quickly threw on a Kyler Murray jersey to honor the Oklahoma quarterback who had just been awarded the Heisman, and then did the famous pose.

The following year on Heisman night, Lopez won his first world title at the Garden’s big arena with a spectacular KO of Richard Commey, and this time he delivered the flip while wearing the LSU jersey of Joe Burrow, who won the award.

Three years later, Lopez returns to that night — and venue — looking to rediscover the magic that made him must-see TV.

“There are guys in boxing you care about and guys you simply don’t give a s— about,” said Lou DiBella, the Hall of Famer who oversaw HBO’s boxing programming from 1989 to 2000. “We don’t have enough guys we care about, but he’s an interesting guy to follow. Vulnerability isn’t a horrible thing.

“The fact he lost the fight to a guy we didn’t think would beat him isn’t a horrible thing. People like comebacks. It’s not like he doesn’t have credentials. He legitimately beat Lomachenko. … I think Teofimo factors into a lot of those fights: [Ryan] Garcia, [Gervonta] Davis, Devin [Haney]. … He’s still a kid and he still has star power. … He needs to continue to keep it together.”

Lopez promises to deliver an emphatic knockout of Martin. He told Martin as much as they stood face to face 100 stories above New York City on Tuesday, saying as they posed together at Edge at Hudson Yards, “Everything’s going to be OK, it won’t hurt that bad.”

But Lopez then reconsidered, saying, “Maybe it will [hurt], it depends how I feel that night.”

If Lopez truly feels at his best and has put the loss to Kambosos behind him, he could deliver the sort of performance that will remind everyone what kind of fighter he can be.

The winner of Lopez-Martin will become the secondary mandatory challenger to the WBC belt after Jose Ramirez receives his shot. But first, Lopez knows he must do much more than simply win.

“I need to be heard in this division,” Lopez said. “The only way that you are able to be heard in the division is by knocking these guys out. Mike Tyson is one of the GOATs because of that. I’m just following the footsteps of these great champions that paved the way for us fighters today.

“The whole goal is to focus on those world titles next year. Me and Josh Taylor, we could fight anywhere in the U.K.; I think that it’ll sell out wherever we go. I’m just looking forward to really making big fights happen for everyone around the world.”

Tech stocks just finished a five-week rally — the longest stretch since market peak in November 2021
Google poised to unveil how it plans to take on ChatGPT
No 10’s defence of Dominic Raab bullying allegations under scrutiny
From pranks to bonding among the NFL’s elite, Pro Bowl Games are about making memories
Google is asking employees to test potential ChatGPT competitors, including a chatbot called ‘Apprentice Bard’