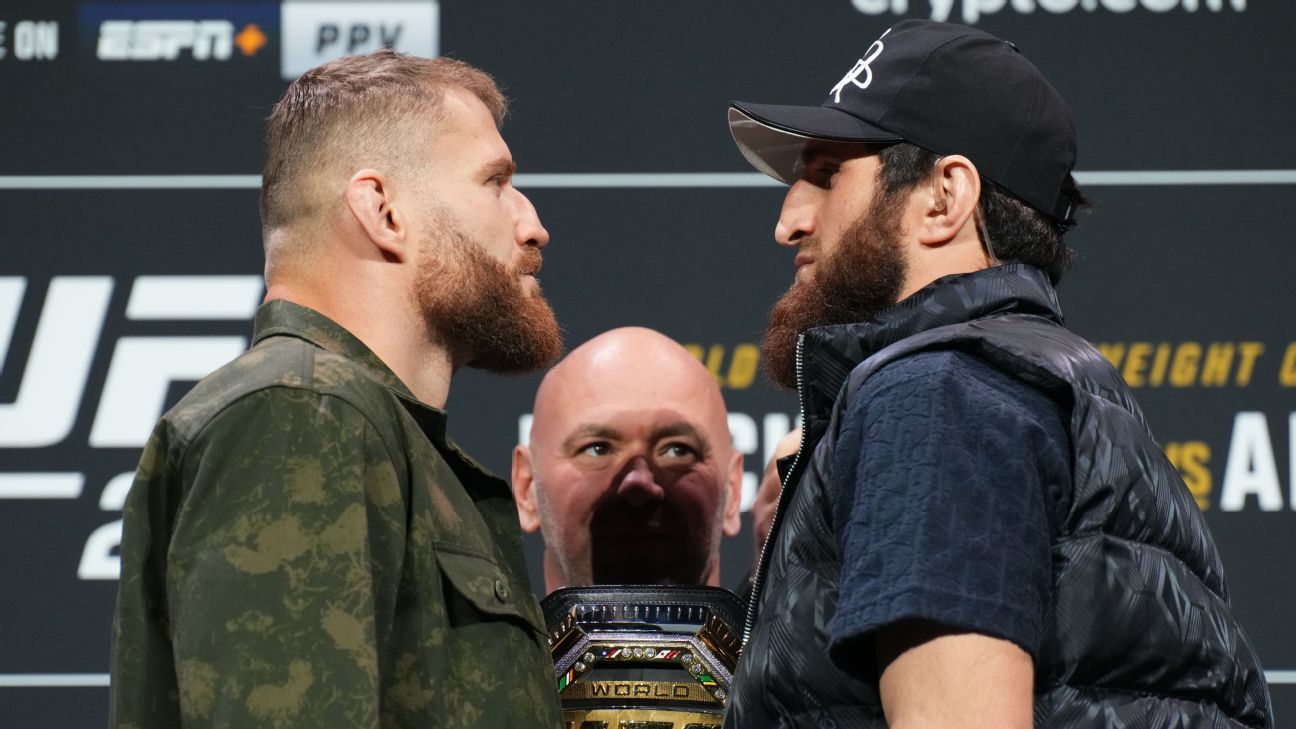 The UFC light heavyweight title will be up for grabs this weekend — even without the participants who were originally scheduled to battle for the gold.

Former champion Jan Blachowicz will take on Magomed Ankalaev in the main event of UFC 282 on Saturday in Las Vegas. The winner will take home the vacant UFC 205-pound title. Jiri Prochazka gave up the belt because of a shoulder injury and his scheduled challenger (and former champ) Glover Teixeira is likely next in line for the Blachowicz vs. Ankalaev winner.

Blachowicz and Ankalaev were supposed to fight in the co-main event in a title eliminator, but now they will compete in a five-round fight for the title.

The light heavyweight title is up for grabs as former champion Jan Blachowicz aims to regain his gold when he faces rising contender Magomed Ankalaev.

Blachowicz (29-9) has won six of his past seven fights. The Polish fighter’s only loss during that time came against Teixeira, who beat Blachowicz for the title at UFC 267 in October 2021. Blachowicz, 39, knocked out Dominick Reyes to win the title at UFC 253 in September 2020 and then successfully defend it against Israel Adesanya at UFC 259 in March 2021.

Ankalaev (18-1) has won nine in a row. The Dagestan-born fighter is coming off a second-round TKO of Anthony Smith at UFC 277 in July. Ankalaev, 30, has just one UFC loss, in his debut fight against Paul Craig in 2018, a bout in which he was winning until Craig caught him in a triangle choke with one second left in the fight.

In the co-main event, fan favorite Paddy Pimblett will face Jared Gordon in a lightweight matchup. Pimblett (19-3) has won five in a row overall, including his first three in the UFC. The 27-year-old England native is a former Cage Warriors featherweight champion. Gordon (19-5), a 34-year-old New York native, has won four of his past five fights.

Also on the card, Darren Till returns to face Dricus Du Plessis in a middleweight contest, a pair of featherweight prospects Bryce Mitchell and Ilia Topuria clash and 18-year-old Raul Rosas Jr., the youngest fighter on the UFC roster, faces Jay Perrin.

Follow along as Brett Okamoto, Marc Raimondi and Jeff Wagenheim recap all the action or watch the fights live on ESPN+ PPV.

Quarantillo flurried a series of significant strikes in the second round which forced the referee to stop the fight. More to come from Vegas in a bit.

Brown had some camp chaos coming into UFC 282, but he didn’t let it affect his performance. Near the end of a back-and-forth fight, Brown was able to get into top position, shift to an arm-triangle choke and force Silva to tap at 3:41 of the third round. Brown had been training with James Krause at Glory MMA in Missouri, but the UFC has banned Krause amid a betting investigation and fighters have been told to disassociate with him or they cannot participate in UFC events. Krause was not in Brown’s corner.

Brown wobbled Silva with a right hand immediately to start the bout. The two exchanged big shots and scrambles throughout the bout. But Brown was able to get into a superior position on top and move to the submission.

Brown, 32, has won three of his last four fights. The Arkansas native is Dana White’s Contender Series alum. Silva, a 35-year-old Venezuelan-born fighter who trains out of Costa Rica, was making his UFC debut after earning a contract on Contender Series.

Two undefeated 135-pounders opened the night with a fight that did what grappling-heavy bouts seldom do: elicit cheers rather than boos from just-brawl-for-us MMA fans. But after the fighters traded advantages on the mat in entertaining scrambles for much of the fight, the crowd ended up getting what it came for, when Saaiman hurt Koslow with a flurry on the feet in the third round and got the TKO at 4:13.

For Saaiman, a 21-year-old from South Africa, it was his UFC debut. He has scored finishes in six of his seven wins.