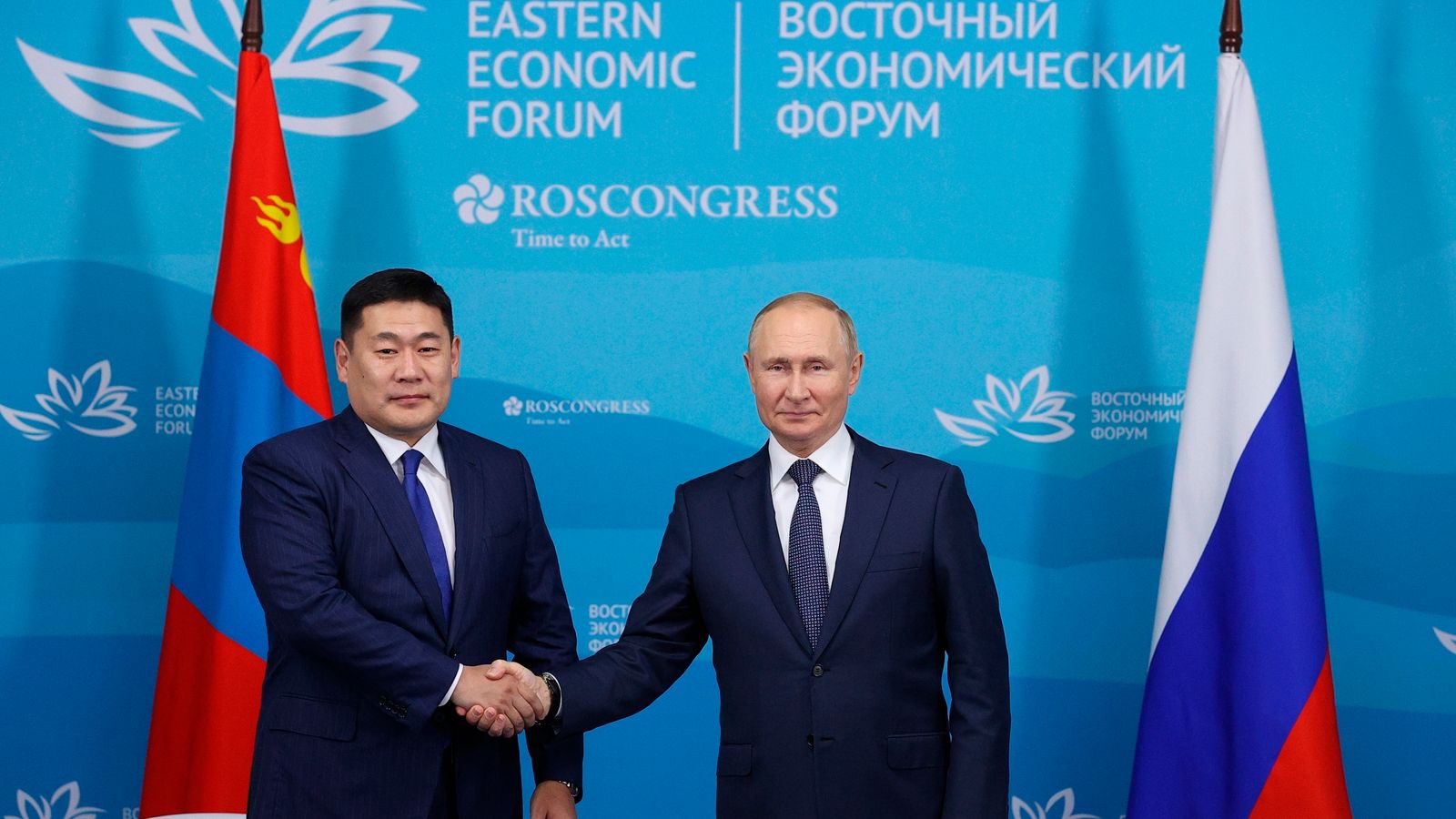 The deputy prime minister of Mongolia has defended his country buying almost 100% of its gas from Russia, saying that its position as a large landlocked country presents “a lot of problems and issues”.

Speaking exclusively to Sky News, Sainbuyan Amarsaikhan said that while Russian sources are important to ensure “continued supply with a reasonable price and timely delivery”, the country is looking to “diversify” its gas sector and the economy more broadly “as quickly as possible”.

He added Mongolia is looking to countries such as Australia to “strengthen cooperation – bilateral and multilateral”.

Mongolia is a large landlocked nation sandwiched between China and Russia.

The logistical challenges of its geography as well as its position as a former Soviet outpost and its historical links with China mean it is highly reliant on its two powerful neighbours for trade and supplies.

But 2022 has brought that reliance into sharp focus as both the war in Ukraine and China’s zero COVID policy have put Mongolia in a precarious position.

It’s reliance means that Mongolia has been cautious in its approach to the Ukraine war. It abstained earlier this year from a United Nations vote condemning Russia’s invasion.

“Through our north neighbour Russia, we have all our transportation coming from Europe,” Mr Amdarsaikhan explained.

“Russia is our partner”.

But while he made clear halting the purchase of Russian gas is not an option for a country that needs “security of supply”, he insisted: “We do want to diversify not only the gas sector.”

Mr Amdarsaikhan also criticised western countries for spending “trillions of dollars around the world for war, nuclear weapons, and all different inhuman acts”, when there are other pressing priorities such as helping poorer countries fight climate change.

He called for such spending to be “reconsidered” and made clear that a developing nation like Mongolia cannot move away from coal mining – a major national industry – without international help.

“We need know-how, we need experts and we need financial support,” he said.

“Mongolia cannot do it alone, and we cannot just stop the coal consumption and use it because this is the only resource that this country is leaning on.”

“Those [that] used and consumed billions of pounds of coal in the last century should assist and help countries like Mongolia.”

While Mongolia is a developing country where many of its citizens are still very poor, it has significant mineral resources and a mining sector which expanded rapidly in the 1990s and 2000s, following the country’s transition to a free market democracy.

Mining of minerals from coal, copper and gold account for around a quarter of the country’s GDP.

He was optimistic, however, about the recovery of Mongolia’s economy, which has been under huge strain in part due to the COVID-19 pandemic and China’s zero COVID policy.

The policy has seen the border between the two nations close, which has had a severe impact on trade, much of which is driven across by truck.

“It is causing big damage not only to our economy, but to the whole society, and it’s affecting every sector in the country,” Mr Amarsaikhan said.

He also recognised that recent protests in the capital Ulaanbaatar were in part caused by economic difficulty and inequality as well as alleged corruption in the mining sector.

He acknowledged that “mistakes in the past” have caused people to “lose trust and confidence”.

He hailed the opening of a new railway linking Mongolia to China as a major achievement and vital step towards to rebuilding export figures and helping the economy recover.

“If everything goes well, we are looking at no more than one year to have our economy in much, much better condition,” he said.