Thousands of ambulance workers in England and Wales are going on strike today – with NHS leaders warning that they cannot guarantee the safety of patients.

Speaking to Sky News, Health Secretary Steve Barclay said the system would be “under severe pressure” due to the strike, and urged Britons to use “common sense in terms of what activities they do”.

He accused trade unions of choosing a time for the strike when the NHS is already facing winter pressures due to flu, COVID and other illnesses.

Government accused of refusing to talk about pay – strikes latest

The strikes, involving around 25,000 staff, are taking place after last-ditch crisis talks between Mr Barclay and unions failed to address the issue of pay.

It is expected that all Category 1 calls (the most life-threatening, such as cardiac arrest) will be responded to during the strike action today, while some ambulance trusts have agreed exemptions with unions for specific incidents within Category 2 (serious conditions, such as stroke or chest pain).

It means those who suffer trips, falls or other non-life-threatening injuries may not receive treatment.

Share your story about how the ambulance strike is affecting you

Mr Barclay said some decisions about what will be covered during strikes by ambulance workers today will be taken on the day.

Asked why there was not a national contingency plan in place for the industrial action, he told Sky News: “The difficulty with putting contingency measures in place is given the uncertainty as to what exactly is and is not being covered, and the fact that those decisions in some cases will be taken on the day.

“But it’s also the case that even what’s referred to as Category 3 urgent calls are often very serious as well. So we’re doing all we can with NHS colleagues to put in place contingency measures.”

He accused the unions of refusing to guarantee a “national exemption” for life-threatening cases but unions have repeatedly said they have agreed on a local level that Category 1 and 2 calls will be covered and they emphasised that during a meeting on Tuesday.

Unison’s general secretary Christina McAnea said she was “utterly shocked” Mr Barclay accused them of not having a national exemption as she said he “never specifically asked” Unison for one and acknowledged during their meeting that local unions had “details, appropriate plans for their areas”.

About 600 members of the army, navy and the RAF have been drafted in from across the country to help during the walkouts, some of whom have never driven the vehicles before. ‘I cannot express how bad it is’ – paramedic

Ahead of the industrial action, the unions had called on the government to make an offer on pay and suggested an agreement could be reached.

Unite’s Onay Kasab, who attended the Tuesday meeting, warned afterwards that ambulance strikes would “escalate” unless the government agreed to negotiations.

“Our members are absolutely determined to win not just the pay battle but to win the battle to save the NHS,” he said.

Mr Barclay said: “Further pay increases would mean taking money away from frontline services at a time when we are tackling record waiting lists as a result of the pandemic.”

Writing in The Telegraph, the health secretary added: “We now know that the NHS contingency plans will not cover all 999 calls. Ambulance unions have taken a conscious choice to inflict harm on patients.” 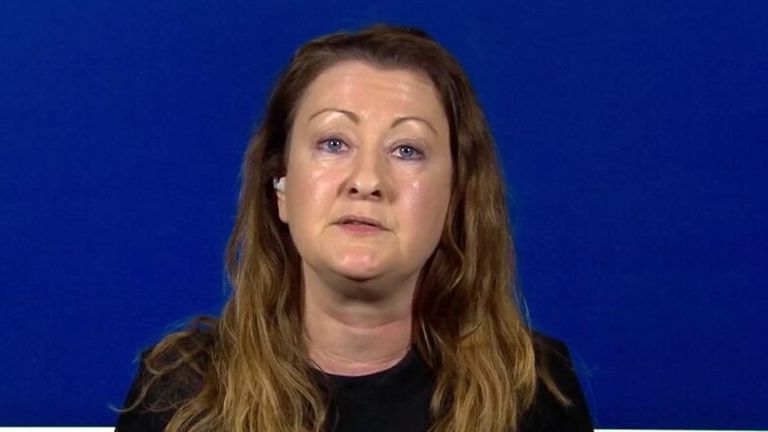 GMB union boss: ‘Make us an offer on pay’

But Rachel Harrison from the GMB union hit back, telling Sky News: “I actually think that’s a really insulting statement to our key NHS and ambulance workers. They’ve not made a conscious decision to put lives at risk.

“They’ve made a conscious decision to stand up for what they believe is an NHS that is crumbling beneath their feet and as they’re watching thousands of their colleagues leave the service every year because of poor pay and poor working conditions and a feeling of being unable to deliver the safe standards of patient care that they want to.

“That’s why they’re making this conscious decision and it is insulting to say that they’re doing this to put people at risk.”

NHS Confederation chief executive Matthew Taylor said: “We have reached the stage where our leaders feel it’s necessary to say they cannot guarantee patient safety, they cannot avoid risks as these strikes unfold.”

The strike action comes a day after ambulance and hospital trusts across the country declared critical incidents as a result of “sustained” and “unprecedented” pressure on services.

Meanwhile, nurses across the country went on strike for a second day yesterday.

Royal College of Nursing chief Pat Cullen has confirmed that nurses will announce post-Christmas strikes by the end of the week unless the government agrees a deal on pay.

She warned Mr Sunak that the “clock is running” for him to enter negotiations to prevent further action. Yesterday, health minister Will Quince urged people to think again about contact sports and avoid running on icy roads during the ambulance strike.