Female students have been banned from universities in Afghanistan with immediate effect, the Taliban has said.

A letter, confirmed by a spokesperson for the higher education ministry, instructed Afghan public and private universities to suspend access to female students until further notice in accordance with a cabinet decision.

The United States and Britain have both condemned the announcement and are likely to raise concerns within the international community, which has not officially recognised the de facto administration.

The US government has said that a change in policies on women’s education is needed before it can consider formally recognising the Taliban-run administration, which is also subject to heavy sanctions.

The Taliban drew criticism back in March after making a U-turn on the opening of all middle and high schools to girls.

Barbara Woodward, Britain’s UN ambassador, said the latest suspension was “another egregious curtailment of women’s rights and a deep and profound disappointment for every single female student”.

She told the council: “It is also another step by the Taliban away from a self-reliant and prosperous Afghanistan.”

A senior British diplomat involved in continuing discussions with the Taliban told Sky News the ban was a huge setback to talks.

“It is a big blow to the country, diplomatic relations and most importantly its people,” they said.

Confirmation of the university restrictions came the same evening as the UN secretary-general’s special representative for Afghanistan, Roza Otunbayeva, said the closure of schools had “undermined” the Taliban administration’s relationship with the international community.

Speaking at a UN Security Council session on Afghanistan, she said: “As long as girls remain excluded from school and the de facto authorities continue to disregard other stated concerns of the international community, we remain at something of an impasse.”

Many students are also due to sit end of term exams. One mother, who asked not to be named for security reasons, said: “The pain that not only I… and (other) mothers have in our heart, could not be described.

“We are all feeling this pain, they are worried for the future of their children.”

She said that when her daughter heard of the letter, she called her in and now fears she could no longer continue her medical studies in Kabul. 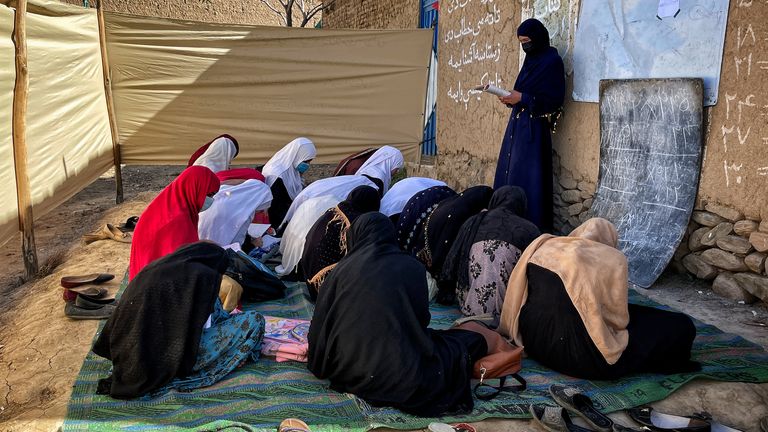 Sky’s Alex Crawford speaks to girls and women in education in Afghanistan – and is given access to the secret schools still teaching girls.

US Deputy UN Ambassador Robert Wood said: “The Taliban cannot expect to be a legitimate member of the international community until they respect the rights of all Afghans, especially the human rights and fundamental freedom of women and girls.”

In a three-part Sky News documentary at the beginning of December, special correspondent Alex Crawford examined the fight for women’s rights in one of the world’s most oppressive regimes.

More than a year since the Taliban took back control of Afghanistan, Women at War: Afghanistan, made contact with the informal networks of women’s resistance groups struggling to maintain their basic human rights, their freedom and their identity.

Ukraine War: What can we expect from spring offensive?
Tyre Nichols funeral: US vice president calls for Congress to pass act limiting immunity for police
Shell announces record annual profits of £32.2bn
No 10 insists UK economy is strong despite IMF warning it will fare worse than any other in developed world – including Russia
Chancellor’s ‘Britain needs you’ plea to the retired may be a tall order