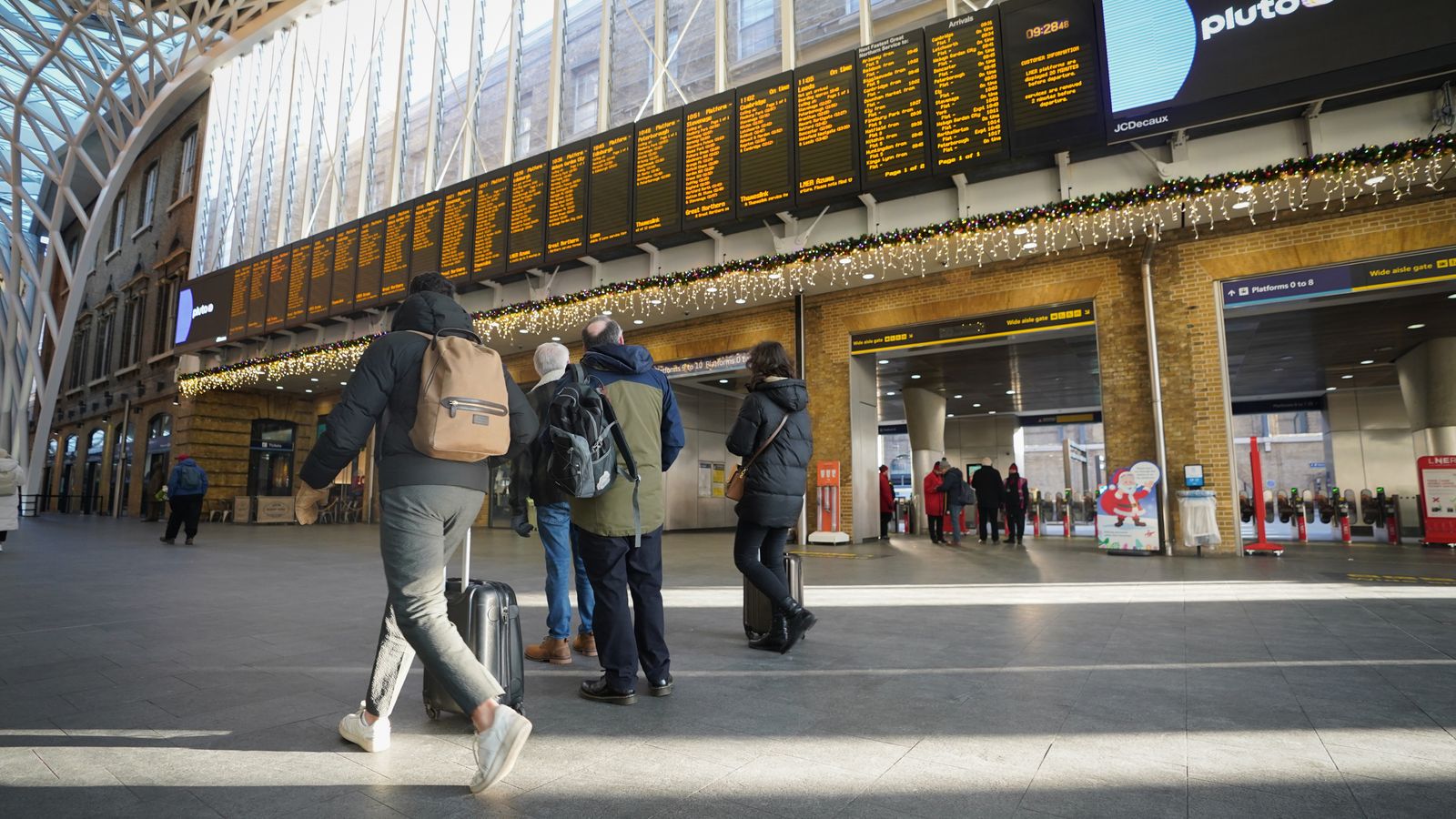 Thousands of members of the Rail, Maritime, and Transport (RMT) union at National Rail walk out on Saturday evening, causing train services to finish at 3pm.

An overtime ban is also causing major disruption to services by a number of operators on Friday, including Chiltern Railways, East Midlands Railway, and South Western Railway.

The lack of trains means many will switch to road transport, with analytics company Inrix expecting journey times by road to be around 14% longer compared with the same period last year.

Read more:
Who is striking when, and why?

A perfect storm of heavy rain and motorway collisions has further added pressure on the UK’s road networks.

Accidents on the M1 and flooding which has forced a partial closure of the M25 are among the disruptions causing major traffic jams on the Friday before Christmas, the AA has warned.

The insurance company said it has attended 9,000 breakdowns throughout the day, with more expected as commuters continue to join the getaway traffic.

The RAC urged motorists to carry out pre-journey checks on their vehicles before setting off, to reduce the chance of suffering a breakdown.

National Highways said almost 98% of England’s motorways and major A-roads will be fully open until the end of January 2 due to it completing and lifting roadworks.

Strikes have taken place every day in December – and Christmas Eve is no different.

Members of the Communication Workers Union (CWU) are walking out in a long-running dispute over pay and Royal Mail’s modernisation plans.

Anyone hoping to fly into the UK could face delays as Border Force officials at Birmingham, Cardiff, Gatwick, Glasgow, and Manchester airports, as well as terminals 2, 3, 4, and 5 at Heathrow and the Port of Newhaven go on strike until the 26 December.

Operations at Heathrow, the UK’s busiest airport, continue to run “smoothly”, a spokesperson has said.

They add there have been no flight cancellations and no excessive queueing in the immigration halls, despite the striking workers.

Meanwhile, thousands of nurses will go on strike again on the 18 and 19 January, the Royal College of Nursing (RCN) has announced.

The union said further strike dates will be confirmed in the new year.

It comes after nurses walked out on 15 and 20 December over a pay dispute, and just days after health sector bosses warned the government of the risk to patient safety due to the industrial action.

RCN general secretary Pat Cullen said: “The government had the opportunity to end this dispute before Christmas, but instead they have chosen to push nursing staff out into the cold again in January.

“I do not wish to prolong this dispute, but the prime minister has left us with no choice.”