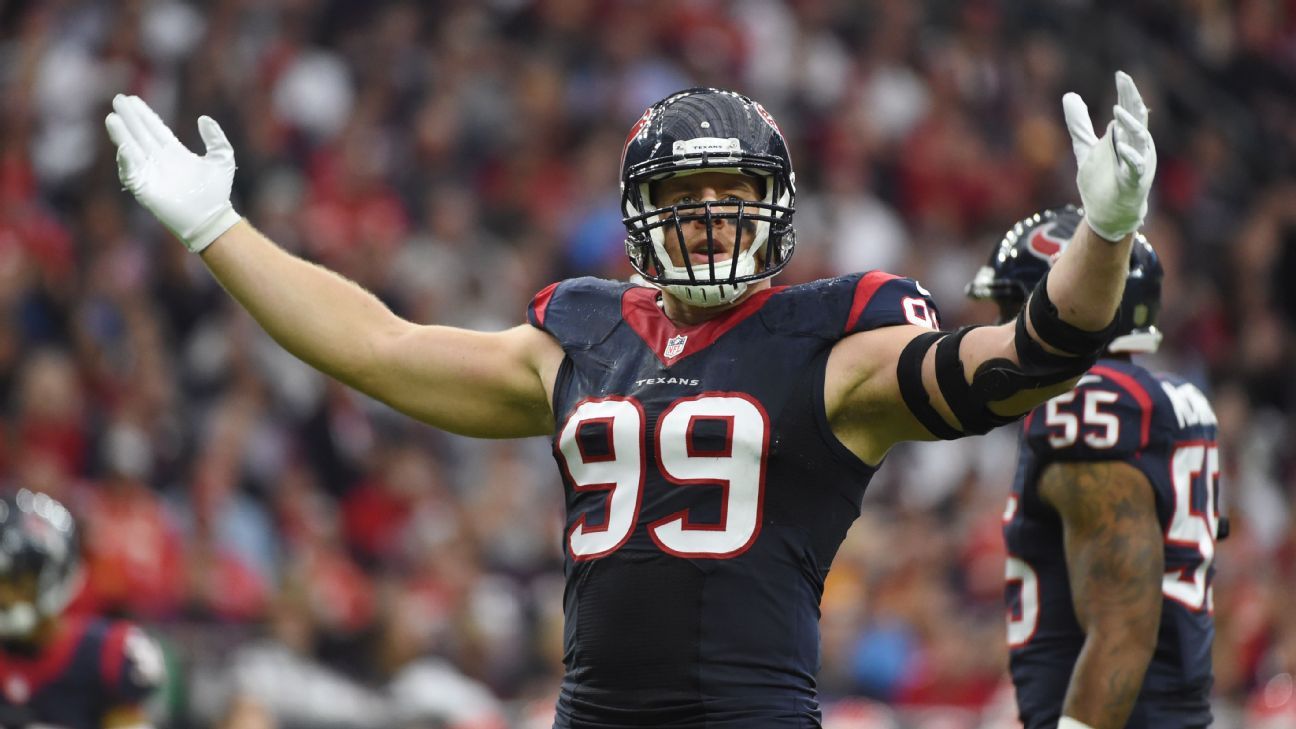 In Week 4 of the 2013 season with the Houston Texans, Watt’s hit on then-Seattle Seahawks quarterback Russell Wilson left a deep gash on the defensive end’s face, his nose and face bloodied as he walked back to the sideline.

That may be the lasting image of Watt’s career which the Arizona Cardinals star announced on Tuesday, via Twitter, was coming to an end.

Watt will retire as one of the best defensive players of his generation and likely a first-ballot Hall of Famer in 2028. The 33-year-old is one of three players to win the NFL Defensive Player of the Year award three times. Aaron Donald and Lawrence Taylor are the others.

And even when his hits weren’t causing his nose to bleed, the respect opposing teams had for Watt was shown with how they defended him. Although double-team data isn’t available all-time, among edge rushers with 400 pass-rush plays over the last five seasons, Watt’s double-team percentage of 29.8% is highest among 55 qualified edge rushers in that span.

Even though he is no longer taking over games, Watt remains the focus of opposing game plans. This season, Watt has been double-teamed on 37% of his pass rushes, the highest rate of edge defenders in the NFL.

Although Watt spent his final two seasons in Arizona, his football career will be best remembered for the impact he made during his 10 seasons with the Texans. Away from the field, he leaves a formidable legacy for his fundraising work around Houston and in other communities as well.

Here’s a look at what Watt has meant and what he accomplished during his 12 NFL seasons.

How dominant was Watt at his peak in Houston?

From 2012-15, Watt was an ascendant talent. He won all three of his Defensive Player of the Year awards in that span, accumulating 69 sacks in four seasons. For reference, the next highest sack total in that span was Justin Houston, who had 50.5 sacks. Watt had 20.5 sacks in each of the 2012 and ’14 seasons and is still the only player to record 20 or more sacks in multiple seasons since sacks became officially tracked in 1982. He is also one of eight players to lead the NFL in sacks multiple times, doing so in 2012 and ’15.

J.J. Swat, as Watt was nicknamed, became known for his signature move: batting down passes. His 60 career batted passes are easily the most in the NFL since he entered the league in 2011.

Not only did @JJWatt have 20.5 sacks and 29 tackles for loss in his unforgettable 2014 DPOY season…

He scored FIVE TDs 🔥 (via @NFLLegacy)pic.twitter.com/xgdavKSP5P

And it wasn’t just the defensive side of the ball that Watt made his mark: He was so dominant that the Texans used him to score offensive touchdowns, as well. Watt joins Deion Sanders as the only two players since the merger with multiple receiving touchdowns and multiple interceptions returned for touchdowns.

Watt is the best to ever play for the Texans and the all-time sack leader for the franchise. His 101 sacks are almost double the next closest on the list.

What has Watt’s impact been off the field?

For as dominant as Watt was on the field, it’s what he did off the field for so many in Houston that will be remembered. There are so many stories — and surely even more few know about — about how Watt made time to help the surrounding communities.

There was the Berry family, whom he met in 2011, and Jeston Adams and Will Martinez, whom he met through Make-A-Wish. In 2018, Watt visited the survivors of the school shooting at Santa Fe High School and said he would pay for the funerals of the students and teachers who died. As of March 2021, when he was released by the Texans and moved to Arizona, Watt had never turned down a Make-A-Wish request.

He also helped kids through the Justin J. Watt Foundation he set up while he was still at the University of Wisconsin. The foundation has raised more than $5 million to help underfunded middle school after school athletic programs and organizations.

But perhaps his biggest impact came in 2017, when he raised more than $41 million to aid those affected by Hurricane Harvey. The fundraising effort began with a simple video on social media, where he asked, “Whatever you can donate, please donate to help these people out.” He set up a page on YouCaring.com, donating $100,000 of his own money and setting the goal at $200,000. He raised that in two hours. The $41.6 million raised made it the largest crowd-sourced fundraiser in history.

The funds went to help rebuild Houston, a process Watt oversaw to ensure the money made “as large of an impact as possible” and “the entirety of the funds would be utilized here in Houston and the surrounding areas for those who were affected most by Hurricane Harvey.”

What stands out about Watt’s two seasons in Arizona?

One of the reasons Arizona wanted Watt was because of his ability to lead, especially off the field.

In two years with the Cardinals, his impact was felt around the locker room, especially the defense. He led by example in the weight room and followed up by being a mentor for anyone who’d come by his locker, especially for his fellow defensive linemen. Guys like Zach Allen, Michael Dogbe and Cameron Thomas got a front-row seat to see how a future first-ballot Hall of Famer operated on a daily basis. Teams can’t buy that type of an experience.

He decided to sign with Arizona, in part, because of the promise the Cardinals showed after the 2020 season, which included the potential of making a deep playoff run behind what was once one of the NFL’s top offenses. Watt was a large part of Arizona’s early-season success in 2021 before he suffered a shoulder injury that kept him out until the wild-card round. Arizona was 7-0 before he got hurt and 4-6 after.

Watt continued to play at high level this season. Among the 48 players with at least 10 pass breakups this season, he leads the list with 28 pressures and is tied with Daron Payne for most sacks with 9.5.

His decision to walk away comes after the birth of his first child, another round of free agency on the horizon and the likelihood of the Cardinals going through a massive rebuild.

Watt is undoubtedly a Hall of Famer and likely to be inducted into the Texans’ Ring of Honor not long after he retires. His numbers show his dominance, but the awards do, too. Watt has been All-Pro five times in his career. Since the merger, that’s tied with Jack Youngblood for the third-most such selections by a defensive end, trailing Bruce Smith and Reggie White with eight apiece.

While Watt won the NFL Defensive Player of the Year award three times in his career, it’s not a stretch to say that number could have been higher if not for the injuries he dealt with later in his career.

After playing in every game during his first five NFL seasons, Watt played in eight total the following two seasons. As the reigning NFL Defensive Player of the Year in 2016, Watt had surgery to repair a herniated disk in his back in July, forcing him to miss training camp and the preseason. He returned for the start of the regular season, but played in three games before needing a second back surgery. The following season, Watt broke his leg in Week 5, finishing on injured reserve for the second year in a row.

Watt returned in 2018 for what was the best season of the second-half of his career; he was in the conversation for Defensive Player of the Year for much of the season. He not only had 16 sacks, but he played in 16 games for the first time since the 2015 season. Since 2018, Watt has played in every game of an NFL season once.

In 2022, Watt had a health scare, when his heart went into atrial fibrillation — an irregular heart rhythm that begins in your heart’s upper chambers — and had his heart shocked back into rhythm. Watt played days later after talking with cardiologists and electrophysiologists, who assured him it was safe.

Despite the injuries Watt has dealt with in his 12-year NFL career, his career numbers are impressive. Watt ranks fourth in the NFL with 111.5 sacks since he entered the NFL in 2011. Only Von Miller, Cameron Jordan, and Chandler Jones have more since then.

Although his sack totals were hindered by his injuries — Watt ranks 26th in career sacks with 111.5 — when he played, he was productive. He ranks fifth all-time in sacks per game with .748 sacks per game among those with at least 100 games played.

The ESPN Stats & Information Group contributed to this story.