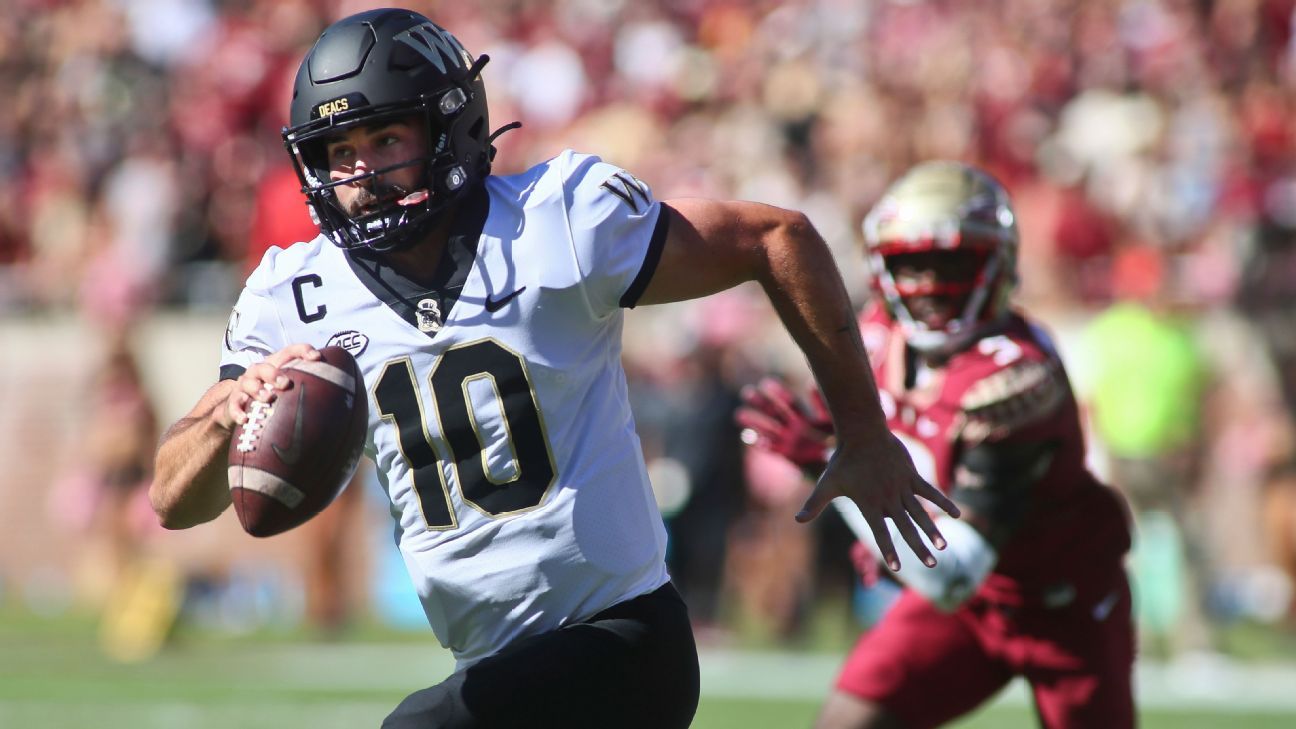 Hartman set the Atlantic Coast Conference record for touchdown passes during his career at Wake Forest, throwing for 110 in his five seasons. Hartman ranks second in ACC history with 12,967 career passing yards, trailing only Philip Rivers.

Hartman started 45 games for Wake Forest in his career, leading the Demon Deacons to a 27-18 record in that time.

Notre Dame is the strong favorite to land Hartman. The Fighting Irish have a need at quarterback with the transfer of Drew Pyne to Arizona State. According to a source, Hartman is seeking a high-end situation to keep him from declaring for the NFL draft and will take a week to evaluate all his options.

NFL scouts project Hartman as a third-day draft pick — likely the sixth or seventh round — so the thought is that he can improve his stock with another year in college. ESPN reached out to three NFL scouts about Hartman, and none of them believed Hartman would get picked before the sixth round, if at all.

There’s a belief among the scouts that playing in a pro-style system would benefit Hartman’s NFL projection after playing in Wake Forest’s successful but unconventional slow mesh system.

The Wake staff had been expecting to lose Hartman, as his most likely option for most of the season was to enter the NFL draft.

If Hartman goes to a blue-blood school — and plenty of high-end interest is expected — he’d likely be able to accumulate significantly more in marketing money or name, image and likeness deals than he would have in battling to make the back end of an NFL roster.

Hartman missed the opening game of this season with a blood clot that was termed a non-football-related medical condition. Wake later revealed upon announcing Hartman’s return that he had Paget-Schroetter syndrome, a blood clot that often is linked to repeated strenuous activity.

Hartman returned seamlessly and threw for 3,701 yards and 38 touchdowns this season.

The Deacons have been preparing third-year quarterback Mitch Griffis to be the starter in 2023, as he replaced Hartman in the opener and threw for 348 yards and five touchdowns this season.

Wake Forest will open the 2023 season against Elon and plays at Notre Dame on Oct. 28.

S Club 7 singer reveals she was homeless over Christmas
‘Google it’ no more? How AI could change the way we search the web
How to watch all the big films nominated for Oscars and BAFTAs
Norway’s fossil fuel bonanza stokes impassioned debate about how best to spend its ‘war profits’
‘Change the bloody government’: Sir Rod Stewart calls in to Sky News to donate for medical scans