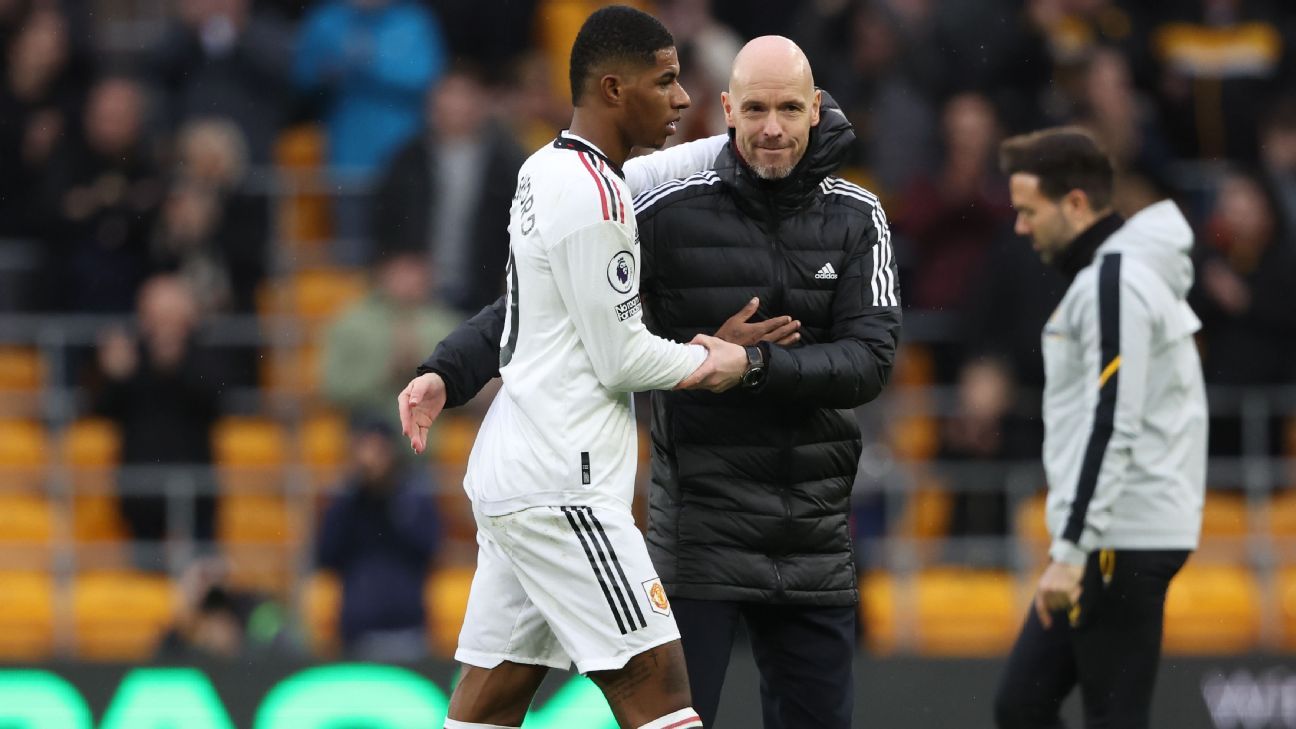 Marcus Rashford gave the perfect response to being dropped by Manchester United manager Erik ten Hag by coming off the substitutes’ bench to score the only goal of the game in a 1-0 win at Wolverhampton Wanderers.

The victory was enough to lift United into the top four for the first time this season, for 24 hours at least — within three points of second-placed Manchester City and eight adrift of leaders Arsenal.

Rashford started the day in Ten Hag’s bad books, but he ended it as the match winner after responding to being dropped by scoring the only goal at Molineux.

Having scored in both of United’s games since domestic football resumed after the World Cup shutdown, Rashford’s absence from the starting XI was a surprise — until Ten Hag said the England forward had been dropped because of an internal disciplinary matter.

United sources have told ESPN that Rashford’s transgression was a minor one, but with Ten Hag determined to show that his strict rules apply to every player, the decision was taken to drop him to the bench.

Cristiano Ronaldo (now an Al Nassr player after having his United contract cancelled last month) and Alejandro Garnacho have already learned that Ten Hag does not compromise on his disciplinary principles, and Rashford became the latest to fall foul. When a manager makes such a big call, he has to get it right and Ten Hag’s gamble threatened to backfire as United missed a series of first-half chances with Rashford on the bench.

Having made his point, however, Ten Hag put Rashford on at the start of the second half and the 25-year-old made an instant difference, stretching the game for United and injecting more pace and penetration. And when he scored on 76 minutes, Rashford’s celebration was greeted with a similarly passionate reaction from Ten Hag. Point made and no harm done to the team, but with his authority underlined. It was a good day for Erik ten Hag.

Luke Shaw‘s eight years at United have been a roller coaster for the England defender, with injuries, loss of form and a succession of sceptical managers constantly raising questions over his long-term prospects at Old Trafford. But the 27-year-old is flourishing in Ten Hag’s team, despite making a slow start under the former Ajax coach.

Having lost his place at left-back to Tyrell Malacia, Shaw eventually reclaimed his starting spot and he hasn’t looked back, securing regular football and earning a place in England’s World Cup team. But at Wolves, the former Southampton full-back showed his growing importance to Ten Hag by filling in at centre-back for the second successive game because of injuries and illness within the squad, and Ten Hag deciding that Lisandro Martinez is not yet ready to play following his recent return from World Cup duty with Argentina.

Shaw was outstanding during the midweek win against Nottingham Forest, and against Wolves he once again showed composure and experience alongside the equally impressive Raphael Varane. His lack of height has proven to be no issue and, with centre-backs Harry Maguire and Victor Lindelof watching from the bench, Shaw made another big statement to Ten Hag and proved his value to the squad.

3. Costa gamble fails to pay off

Diego Costa lasted just 45 minutes of this game and the Wolves forward can have no complaints about being substituted by manager Julen Lopetegui.

The former Chelsea and Atletico Madrid forward has now made nine appearances for Wolves and is still waiting for his first goal. On this evidence, it might never come.

At 34 and without a club prior to his arrival at Molineux, Costa was a gamble when former manager Bruno Lage signed him in mid-September, but it was a one that Wolves needed to take because of ongoing concerns over the fitness of Raul Jimenez and the failure of £35.6 million forward Fabio Silva to make any impression before being loaned to Anderlecht this summer.

Costa had an outstanding Premier League pedigree following his successful period at Chelsea, but time has not been kind to the former Spain international and his injuries have clearly caught up with him. Against United, he lacked the pace to worry the opposition and ended up conceding too many fouls, including one for a ridiculous aerial lunge at Shaw. The good news for Wolves is that Mexico forward Jimenez is now fit and back in contention for a starting spot, while Matheus Cunha‘s loan from Atletico Madrid will be registered on Sunday, so the Costa experiment might soon be over.

The Manchester United defender was outstanding at the heart of the back four. Reads the game so well and exudes an air of calm.

United spent £85m to sign Antony from Ajax in the summer, but for a big signing, he has often done little to justify the outlay. At Molineux, he was one-footed and one-paced, frustrating his teammates time after time with his decision-making.

After the match: What the players/managers said

Manchester United manager Erik ten Hag: “It’s good after the decision, Rashford came in. He was bright, he was lively and he scored a goal to give a good reaction. Everyone has to adhere to the rules and if you react like this, it is the right answer.

“We were not that good in the first half. In my opinion the second half was better. Fred was winning second balls and linking play when he came on.

“In the first half, you analyse the game but sometimes things do not work as expected. Wolves did not create many chances and we did but you have to be sharp.

“I was not happy at half-time and I told them with this attitude they will not win this game and everyone had to give 10% more.”

Wolves manager Julen Lopetegui: “Always when you lose, it is difficult. We don’t want to lose, we want to win the match. We showed that we are able to compete with any team but it was a pity.

“I think that the goals are coming after good work and we are working as a team in and out of possession. Maybe we didn’t have the best decision-making in the box. We had five or six good situations to damage them but we have good chances.

“The players have to believe in themselves. We have to have balanced thinking in the next match knowing that the only way is to keep working and to improve.”

– Rashford has six goals in his past nine games with Man United. It’s his most with the club in the same span of games since December 2020.

– Man United only have lost only one of their past nine Premier League games. Only Newcastle United and Arsenal have a better record in that span.

Wolverhampton Wanderers: It’s a crucial trip to Aston Villa on Wednesday as the club battle to stay in the Premier League, before a home game against Liverpool on Saturday in the FA Cup third round.

Manchester United: Ten Hag heads back to Old Trafford to welcome Bournemouth on Tuesday, and then Everton in the FA Cup on Friday.

Future industrial action ‘will be even bigger’ if ministers do not act, union boss warns
Saudi Aramco backs Brooklyn-based startup turning ammonia into fuel
Why is the UK economy predicted to perform so badly?
Truss had right priorities but failed as she did not deal with ‘big structural issues’, says Shapps
Westminster’s ‘nepo babies’ are here to stay – whether we like it or not | Adam Boulton