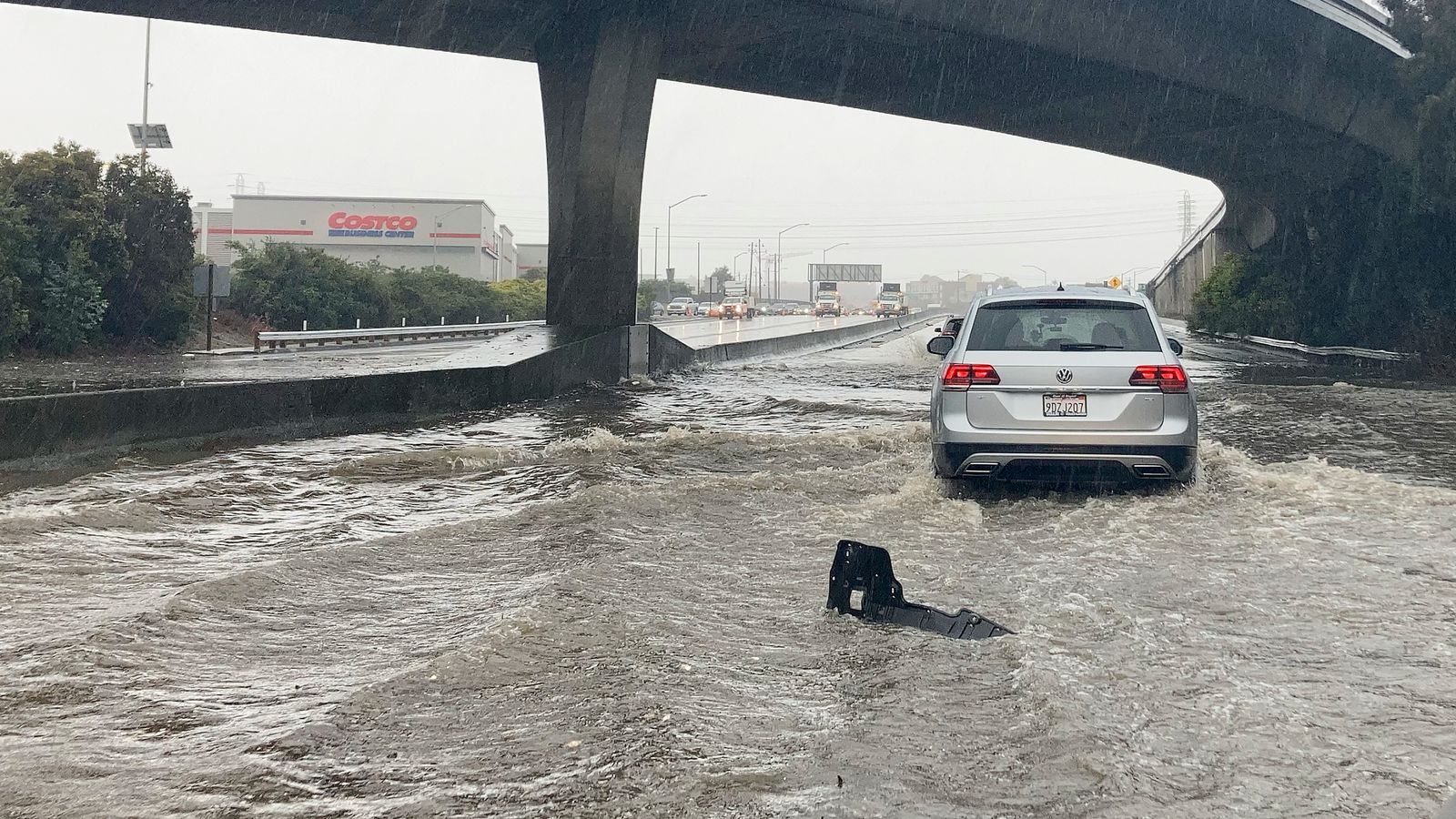 Heavy rain and snowfall have hit parts of California, just days after a brutal bomb cyclone struck the US.

As Californians prepared to ring in the New Year, officials issued evacuation orders for some northern areas of the US state due to the risk of flooding.

Towns and villages around the city of Sacramento and the San Franciso Bay area were some of the worst impacted by the deluge on Saturday, with as much as 3.7 inches (9.3 centimetres) falling across the day.

Rainfall in downtown San Francisco on Saturday topped 3.3 inches (8.3cm) on Saturday afternoon, one of the highest daily rainfalls since 1994.

Photographs show major roads closed due to flooding, while a section of the famous US 101 Highway to the south of the city was also shut off on Saturday.

Some rainfall totals in the surrounding San Francisco Bay area topped 4 inches (10cm), while as much as 5.3 inches (14cm) were recorded to the east of Sacramento, near to the foot of the Sierra Nevada mountain range.

One woman was seen being rescued from a car which had stalled in floodwater in the town of Pleasant Hill, to the north east of San Francisco. Other images show roads across northern California closed due to rock slides.

Homes in the Sacramento area were hit with power cuts, with as many as 153,000 customers affected on Saturday, according to the Sacramento Municipal Utility District (SMUD).

Meanwhile, to the east, in the Sierra Nevada mountain range, experts warned of up to 2ft (0.6m) of snow.

The wet weather pattern is being labelled an “atmospheric river storm”, pulling in a long and wide plume of moisture from the Pacific Ocean.

Meteorologist Courtney Carpenter said the storm could drop over an inch of rain in the Sacramento area before moving south.

It is the first of several storms expected to roll across California over the next week.

The current system is expected to be warmer and wetter, while next week’s storms will be colder, said Hannah Chandler-Cooley, a meteorologist at the NWS in Sacramento.

It comes after central and eastern parts of the US were struck with a US bomb cyclone, bringing huge snow storms and cold blasts as low as -45C.

More than 200 million people – about 60% of the US population – were under some form of winter weather advisory or warning at the end of December, with the National Weather Service calling it a “historic winter storm”.

The storm caused at least 57 deaths in the US, with a further four people killed in Canada after a bus rolled over on icy roads in British Columbia.

In the US, 28 of the deaths were in the state of New York, most of them in Erie County, where the main city Buffalo was hit hard.

Haiti is falling apart and there is no safety net – the perverse reality is that gangs have filled the gap
Shell announces record annual profits of £32.2bn
Art Collector rolls to Pegasus World Cup win
Oil giant Shell posts highest-ever annual profit of $40 billion
‘Nobody is born smart’: Ex-commander of Russian mercenary group apologises for fighting in Ukraine