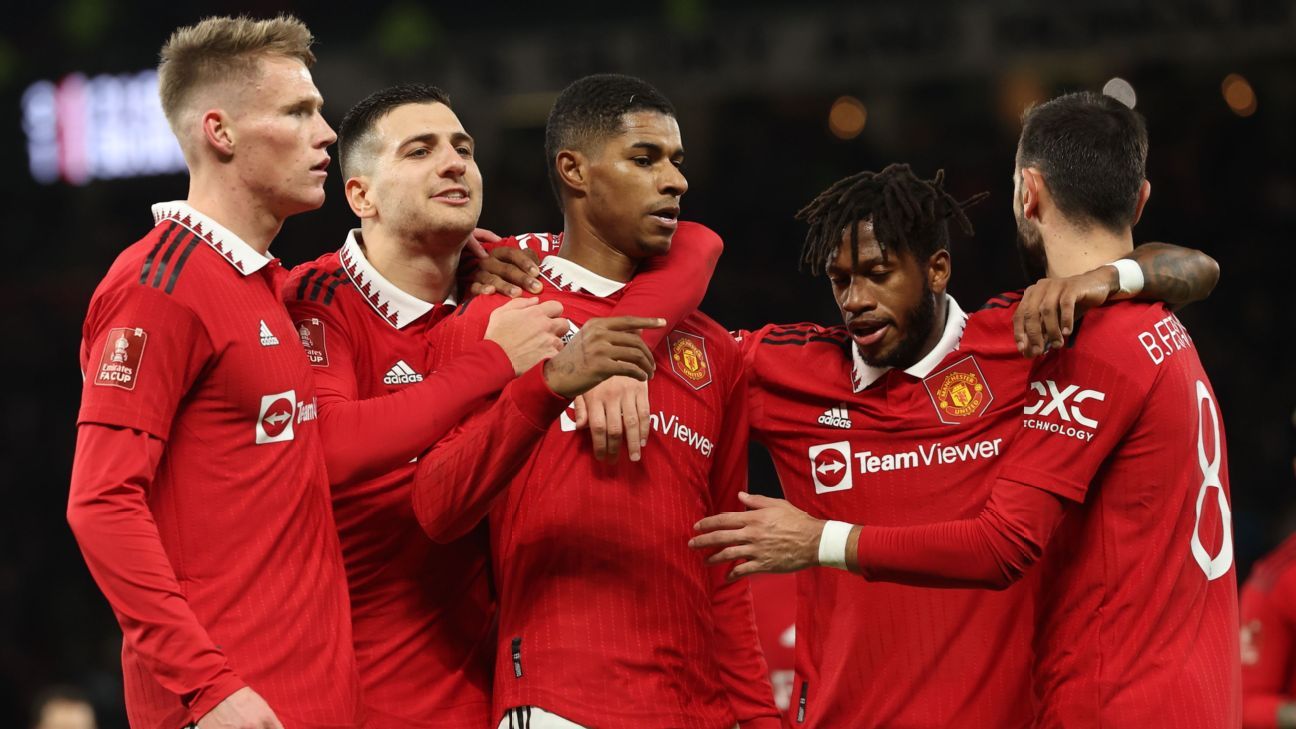 MANCHESTER, England — Manchester United survived a nervy FA Cup tie with Everton to book their place in the fourth round with a 3-1 win at Old Trafford on Friday.

Marcus Rashford was involved in all three goals for Erik ten Hag’s side, first crossing for Antony to score at the back post and then forcing an own-goal from Conor Coady. He got on the score sheet himself with a late penalty to find the net for the fifth game in a row.

Coady had made it 1-1 after a mistake from David De Gea, and Frank Lampard’s team thought they had equalised for a second time, only for substitute Dominic Calvert-Lewin to have a goal ruled out for offside after a VAR review before Rashford made the game safe in stoppage time.

It has become a feature of Ten Hag’s first season that he doesn’t take any game lightly and fixtures in the Europa League and Carabao Cup have been treated with the same respect as those in the Premier League.

United have put themselves in the race to challenge for the title and have got big games to come against Manchester City and Arsenal before the end of January. That didn’t stop Ten Hag from picking a strong team against Everton, though, and it will almost certainly be the same when League One side Charlton Athletic visit Old Trafford on Tuesday in the Carabao Cup quarterfinals.

Casemiro played a key part for Brazil at the World Cup and has started each of United’s five games since the tournament ended. He’s probably the one player Ten Hag can’t do without because there is no natural replacement in the squad, but the fact that Casemiro started against Everton three days after playing 90 minutes against Bournemouth shows how keen the Dutchman is to win a trophy — even if his priority remains the Premier League.

It’s still very early in Antony’s career at Old Trafford but already a debate is brewing about him. On one hand, the Brazilian winger has scored four goals — including one here against Everton — and has filled a void that has existed for years on the right side of the front three.

But there are also occasions when he frustrates the fans, particularly when he’s so keen to cut inside onto his stronger left foot. It’s a rarity to see him touch the ball with his right at all, and opportunities to run past defenders are missed because he doesn’t trust himself on his weaker side. It’s something Ten Hag has mentioned before as an area of his game that needs to be improved. Only 22 years old, he has time to do it.

Part of the problem facing Antony is the fee it took for United to prise him away from Ajax in the summer. It’s not his fault that he commanded a €100 million transfer fee and that United were willing to pay it, but it also shapes the way his performances are viewed. Part of the pressure comes with the size of the transfer fee and maybe the debate wouldn’t be so fierce if Ajax had settled for €50m instead.

An early exit from the FA Cup will only heap more pressure on manager Frank Lampard, but at least there was a bit of fight in the way they bowed out. It’s now six defeats in seven games for Everton, but the performance was much improved from the disastrous 4-1 home defeat to Brighton & Hove Albion on Tuesday. Maybe it’s the big games that bring the best out of Lampard’s players after the 1-1 draw at Manchester City on New Year’s Eve sandwiched between horror shows against Wolverhampton Wanderers and Brighton at Goodison Park.

Everton’s next two games against Southampton and West Ham United — both in the bottom four — will go a long way to deciding Lampard’s fate. If they can show the same spirit as they did at Old Trafford, then they should have enough to pick up points and move themselves out of the relegation places. But two more bad results, and particularly defeat at home to bottom-of-the-table Southampton on Jan. 14, might cost Lampard his job. He can be pleased with parts of the performance against United but he needs for it to be replicated when the pressure is on in the Premier League.

Best performer: Marcus Rashford, Manchester United. Made the first two goals with direct, dangerous running at the Everton defence, and then scored the penalty.

This, uh, didn’t go quite as De Gea may have envisioned it.

As it turns out, it was perfectly balanced for Coady, as all things should be.

Marcus Rashford forces an own goal from Conor Coady.

After the match: What the players/managers said

Rashford on his incredible run of form: “In terms of performances, it’s probably the best that I’ve been, so I feel good on the pitch, I’m getting into positions and areas to score goals. If I keep creating chances, I feel like I’ll keep scoring.”

Lampard: “Marcus Rashford was probably the difference. A top individual talent can do that to you.”

– Antony’s goal is his first in any competition since Oct. 9, which also happened to be against Everton.

– Rashford has a goal contribution in five straight games for United for the first time in his career.

– Coady’s goal is his first in the FA Cup since Feb. 16, 2014, against Nottingham Forest. Those are the only times he has scored in the competition.

Everton: The Toffees will get a full week of recovery before returning to action in the Premier League a week from Saturday, when they welcome Southampton to Goodison Park.

Why is the UK economy predicted to perform so badly?
Meet 30-year-old ‘miracle’ Bobi – the world’s oldest dog ever
Oil giant Shell posts highest-ever annual profit of $40 billion
Six rotors. 200mph. Joby’s electric helicopter may be the future of transportation
US shoots down Chinese ‘spy balloon’