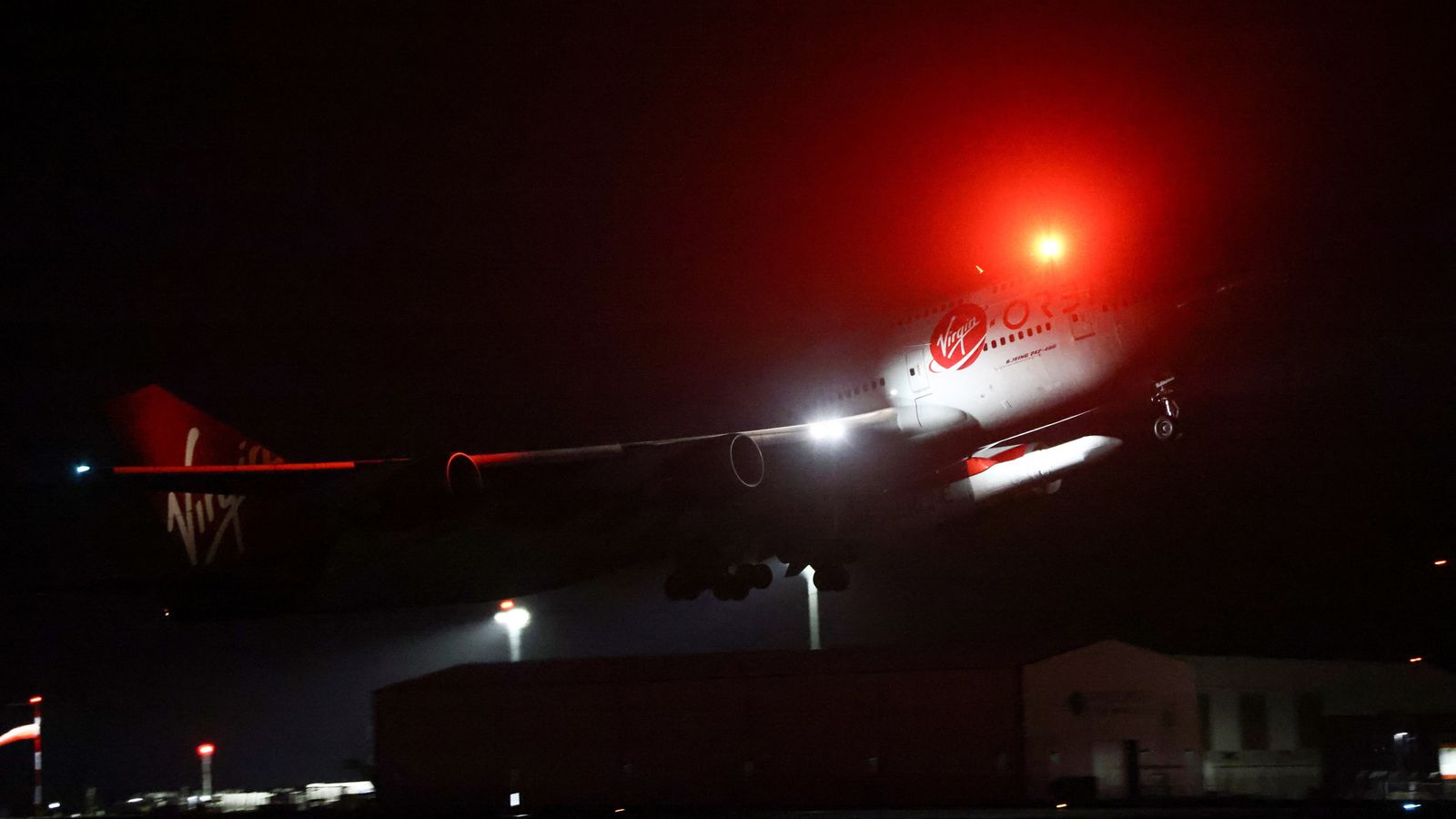 The crew behind an historic rocket launch from UK soil have vowed to bounce back after their highly anticipated space mission ended in failure.

LauncherOne suffered an “anomaly” in its bid to reach orbit on Monday night, after being carried skyward from Spaceport Cornwall by a converted jumbo jet named Cosmic Girl.

There was raucous applause and cheering among the 2,000 lucky ticketholders in attendance in Newquay when the former Virgin Atlantic Boeing 747 took off just after 10pm.

The sound of The Rolling Stones’ Start Me Up – after which the mission was named – pumped out of several loudspeakers, drowning out the crowds.

But excitement turned to disappointment when launch operator Virgin Orbit revealed that the rocket had failed to deploy its payload of nine satellites.

“We appear to have an anomaly that has prevented us from reaching orbit,” it announced.

“We are evaluating the information.”

It is understood that LauncherOne encountered problems during its second stage after release from Cosmic Girl.

The rocket dropped from the aircraft 35,000ft above the Atlantic, off Ireland’s southern coast, just before 11.15pm.

The first stage – which sees the spacecraft burst into life after about four seconds before accelerating to more than 8,000 miles per hour – appeared to proceed accordingly.

A short while later, the second stage was supposed to eject the nine onboard satellites into orbit – and this is the vital moment where the as-yet-undefined “anomaly” is thought to have occurred.

Virgin Orbit reported the issue about half an hour after the rocket dropped from the plane.

Matt Archer, from the UK Space Agency, said the precise cause was still under investigation.

“In effect, the rocket has not reached the required altitude to maintain its orbit or deploy the satellites,” he said.

The second stage needed to put the rocket some 500km above the Earth – its path would then have taken it to the opposite side of the planet, releasing the satellites in low orbit over Australia.

Mr Archer said the outcome was “obviously disappointing” and that an investigation would take place, involving the government and agencies including Virgin Orbit.

“We knew this had a risk of failure,” he added.

“Launches don’t always work. We’ll pick up with Virgin Orbit and think about what happens next.”

Read more:
‘Space is hard’: Crowds look on bright side after launch disappointment

Melissa Thorpe, the head of Spaceport Cornwall, which is the UK’s first licenced spaceport, admitted that there were “tears” when LauncherOne’s issue emerged.

“It’s gutting, and we all heard at different times. When we got together, there were tears, and it was very upsetting.”

But she added: “This isn’t the first time we’ve been knocked.

Spaceport Cornwall has been earmarked as a major hub for future launches – Monday night’s should have been the first time satellites had ever been fired into space from Western Europe, let alone the UK.

But Ms Thorpe couldn’t confirm whether the spaceport would see another launch attempt in 2023.

In more positive news, Cosmic Girl did successfully land back in Newquay shortly before midnight, and was once again greeted with applause.

What kind of satellites were being deployed?

Unlike the large satellites taken into space by vertical rocket launches, like those carried out by NASA and SpaceX, Virgin Orbit was dealing with far smaller hardware.

Only about the size of a cereal box, the satellites were set to perform a range of tasks in space, such as maritime research and detecting illegal fishing and piracy, as well as national security.

They are also used for climate change observation.

Slowly but surely, Earth’s lower orbit is becoming much more crowded, as companies from Amazon to UK-based satellite company Iridium all hold a presence.

So too does Elon Musk’s satellite broadband company Starlink.

LauncherOne’s satellites would have played a key role for the UK, while the rocket itself was projected to burn up before landing in water back on Earth.

While it failed to deploy its satellites, Start Me Up was still the first orbital rocket launch from UK soil.

However, Sky News science correspondent Thomas Moore said the “huge disappointment” of the mission’s finale could only be seen as a “hollow victory”.

“This […] once again proves that space is hard, and that however good our engineering, it can sometimes fail.”

In addition to the 2,000 people at the spaceport, the official livestream of the event peaked at 75,000 viewers – and 142,000 enthusiasts helped make Cosmic Girl the most-tracked aircraft on Flightradar24.

The sense of awe and excitement was palpable throughout and undeniable even given the heartache at the end.