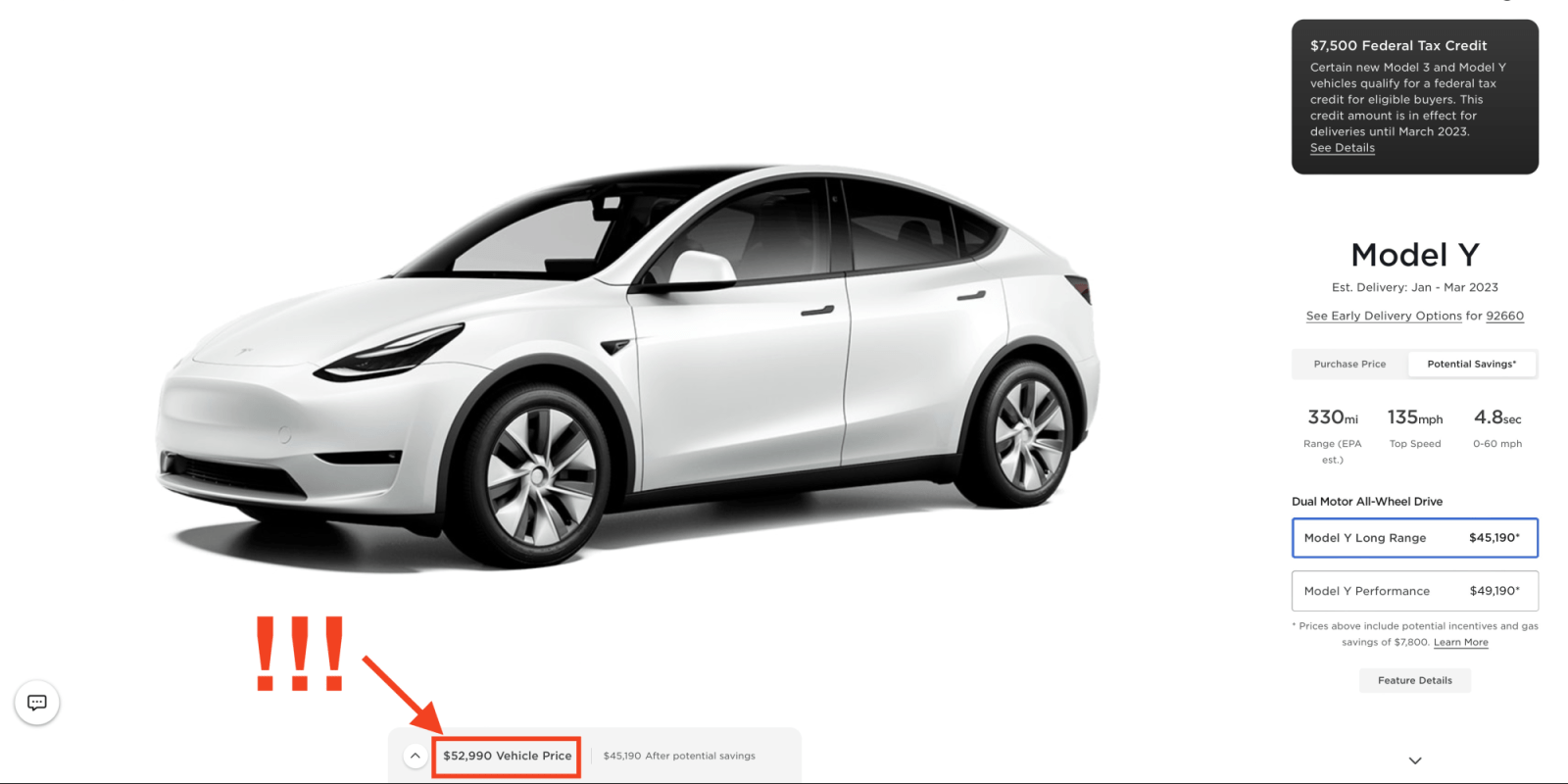 Tesla has massively cut prices across new models in the US, with the largest drop being on the base Model Y, which is now $13k cheaper than it was prior to the price drop.

The changes just happened on Tesla’s website and seem to cover all models.

Other automakers have been raising prices too, though some more modest than others.

But in recent weeks we’ve finally seen some signs that Tesla might need to shore up demand, or at least that the price hikes have gone a little too far. The first and most aggressive cuts so far have been in China, but several other markets are seeing discounts and incentives added to help move vehicles as inventory has grown.

These price drops even led to protests in China from recent buyers who felt like they overpaid, to whom Tesla declined to offer compensation.

As best we can tell, these are the new and old prices for Tesla’s various models:

Among other things, this means that the base 5-seat Model Y now qualifies for the $7,500 EV tax credit in the Inflation Reduction Act. The 5-seat Model Y configuration was previously left out of qualifying due to being considered a “car” rather than an “SUV” by government rules, which take into account a number of factors. This means that it needs an MSRP of under $55k to qualify, which base models now do.

Other configurations of these cars, including Performance models, have also received price cuts. However, there is one significant price hike – the 7-seat option on the Model Y is now $4,000, rather than the $3,000 it used to be.

So in addition to the $13,000 price drop, the base model Y now qualifies for a $7,500 tax credit, meaning a Model Y ordered today could be more than $20k cheaper than one ordered yesterday.

Recently, Tesla CEO Elon Musk called for the government to reconsider its longstanding definition of “SUV,” which has been the same since before the Model Y went into production. He asked his followers to comment on the matter, but the public comment link in question looks to pertain to an annual update to the tax credit form, not to the tax credit qualifications themselves (his company’s lawyers might have told him about this, or he might have read it himself on the website in question, if he weren’t spending all of his time doomscrolling on twitter).

Previously, Musk had called for the government not to pass the bill extending tax credits, saying that Tesla did not need these credits to be successful.

After a year of price hikes, it’s about time that we got a few price drops. Tesla may now be the top luxury brand in the US, but the original concept behind the Model 3 and Y were to be the “people’s vehicles,” closer to the low-end of the luxury segment than the mid or high end.

And, while there definitely seem to be demand concerns across various markets, including North America, much of this must be attributable to the large price rises Teslas have seen in the last year. These cuts finally get us heading in the right direction in terms of price, and should spur significant additional demand. But in addition, CEO Musk has been doing his part to turn customers away with his social media antics, causing many people who would otherwise consider Teslas to look at other brands instead.

These price cuts will reverse the price portion of Tesla’s demand concerns, but it remains to be seen whether customers will remain turned off by the brand destruction which its CEO seems committed towards.

This article was originally published by Electrek.co. Read the original article here.