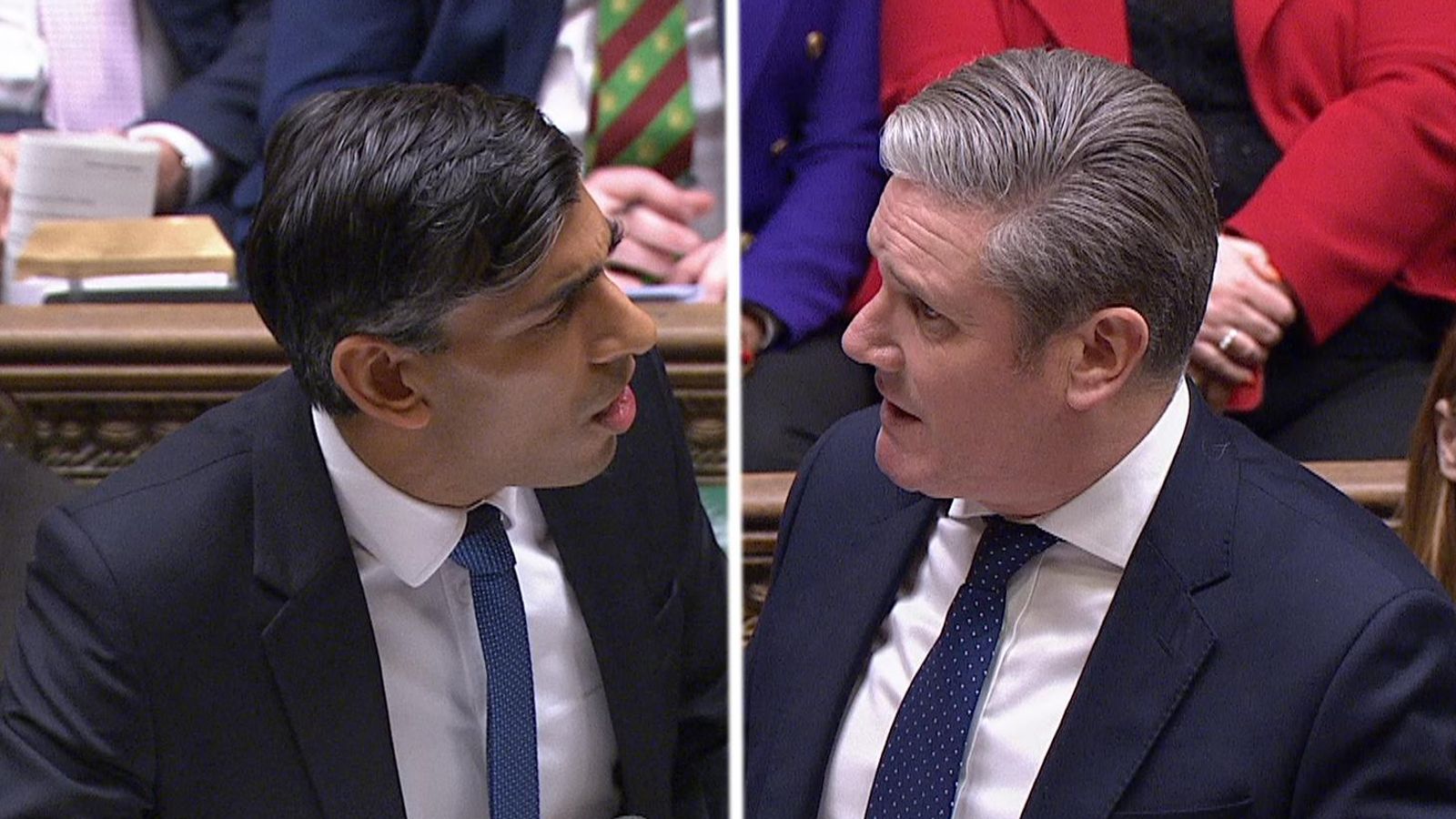 Labour leader Sir Keir Starmer has called on Rishi Sunak to apologise for the “lethal chaos” in the NHS.

He made the demand during Prime Minister’s Questions, saying Mr Sunak should “stop blaming others and take some responsibility”.

But the PM said Labour should get behind his anti-strike legislation to ensure minimum service levels when public sector workers take industrial action.

Increasing pay ‘the worst thing that we could do’ for inflation, says minister – follow latest politics live

Sir Keir pushed Mr Sunak on delays in the ambulance service, listing average waiting times around England for people with chest pains of over two hours – the government target is 18 minutes.

“For the person suffering from chest pains, the clock started ticking straight away,” he said. “Every minute counts.”

The Labour leader added: “These are our constituents waiting for ambulances I’m talking about.

“So, for one week, will he stop blaming others, take some responsibility and just admit under his watch the NHS is in crisis, isn’t it?”

The PM said the government was “rapidly implementing measures to improve the delivery of ambulance times”.

But Mr Sunak linked the delays to the broader issue of industrial action in the sector – less than an hour before ambulance workers announced a further six strikes across February and March.

“If he cares about ensuring that patients get access to life-saving emergency care when they need it, why won’t he support our minimum safety legislation?”

Sir Keir accused him of “deflecting” from the questions, adding: “Just like last week, he won’t say when he is going to deliver the basic minimum service levels people need.

“So if he won’t answer any questions, will he at least apologise for the lethal chaos under his watch?”

But the PM said the government would deliver on waiting times “as soon as we can pass” the anti-strike bill, adding: “We are delivering on the people’s priorities. As we have seen this week, the honourable gentleman will just say anything if the politics suits him.”

The bill was also raised by Labour MP Navendu Mishra, who said Mr Sunak had “showed his card” with the policy, adding: “He has literally gone from clapping nurses to sacking them.”

Meanwhile another Labour MP, Dawn Butler, described how when she had breast cancer both ambulance workers and nurses – who are staging a walkout across 55 trusts in England today – gave her “phenomenal” care.

“Unison and the GMB [unions] are on strike because no one is negotiating with them,” she said. “I have spoken to the general secretary of the Royal College of Nursing and she is adamant she wants to end the disputes. She just needs a meeting with the prime minister.

“Will the prime minister show leadership and meet with the RCN, just a simple yes or no.”

Mr Sunak said the government wrote to all the unions to invite them for “frank, open, honest, two-way dialogue” with the relevant secretaries of state.

He added: “I am pleased that those meetings are happening in a range of sectors and I hope that we can find a constructive way through this.”